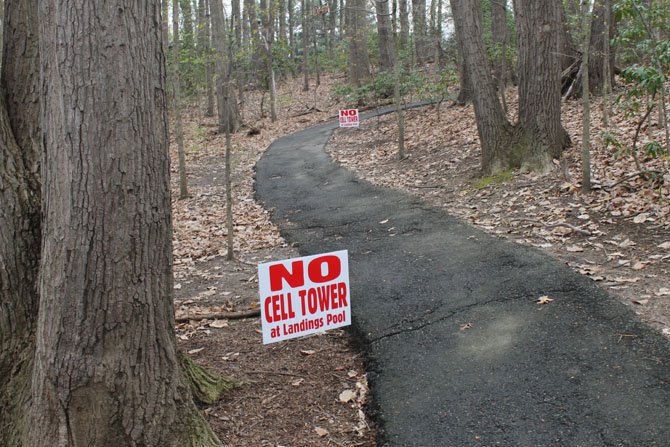 Signs opposing the proposed cell phone tower line the path leading to the pool in the Landings community of the Burke Centre Conservancy. Photo by Janelle Germanos.

Susan Gaertner, a resident of the Landings in Burke Centre Conservancy, spent most of last summer enjoying the community’s pool and peaceful atmosphere.

It is that sense of tranquility and beauty, she says, that makes the community an inappropriate place for a cell tower. 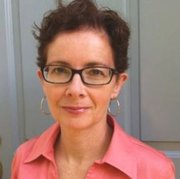 Susan Gaertner, a Burke Centre Conservancy resident, is leading the opposition to the construction of a cell phone tower in the neighborhood.

In February, Gaertner learned that the Conservancy’s Board of Trustees, a seven-member board that governs the community, was considering an unsolicited proposal from AT&T to build a cell phone tower in the community.

Gaertner is not opposed to cell towers, but like several other Burke Centre residents, she is troubled by the proposed location. She says the tower would be too close to the pool, would cause health problems, and decrease property values.

“A residential neighborhood is not an appropriate location,” Gaertner said. “Fixing the problem of cell service in Burke Centre can be achieved through other options.”

NOTHING HAS BEEN decided on, Gloyd said, although some trustees have written articles in the Conservancy’s newsletter about the tower.

This includes Scott Hoefke, trustee of the Oaks, who in the March newsletter wrote that opposition to the tower is based on “fear, ignorance, and emotion.” He supports the construction of a cell tower.

“One reason for this is to improve the quality of service and quality of life for Oaks’ residents and Burke Centre residents as a whole. The second reason is to give Burke Centre a say in what the cell tower looks like, which will not happen with towers built nearby off Conservancy property, like the tower going up behind the Kohl’s. The third reason is the revenue that would be gained,” Hoefke wrote in the newsletter.

The tower would be 160 feet high and would be located within a 2,500 square foot fenced area. Gloyd said AT&T prefers the Landings location because of its elevation.

“It’s one of the highest spots in the area, and would bring the most signal strength,” Gloyd said.

The trustees recently released an online survey to gather community opinion on the cell tower proposal, but Gaertner said the survey is problematic. Less than five percent of Burke Centre residents have responded to the survey.

“It was designed by the board members. That itself is a problem. They’re on a mission to get the cell tower here,” she said.

The survey questions include: Do you feel that cell phone service is adequate in your neighborhood? Would you like to have improved service? How close to your home is too close for a tower to be built?

Gloyd says trustees are still considering all options and are in the information-gathering process, and have not made a decision.

“Right now, they are just doing their due diligence, trying to do all of the research on the cell tower, the proposal from AT&T, and getting advice from legal counsel on whether or not they have the authority even if they wanted to do it,” he said.

Gloyd said the first meeting between the board of trustees and AT&T was scheduled to take place the evening of April 21. 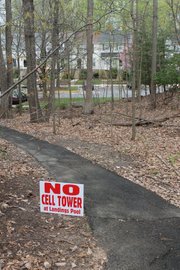 A view from the top of the hill where Board of Trustees are considering a proposal from AT&T to install a cell tower.

Gaertner thinks that commercial and industrial locations should be considered as an alternative to the Landings location. There’s even a cell phone tower going up behind Kohl’s that she says could improve cell phone service. But in her opinion, the financial prospects are tempting for the trustees.

“In a word: money. It is revenue for the board,” Gaertner said. “They are willing to sell out this community to AT&T.”

Gloyd said this isn’t true and that the board is only considering the proposal because of the issues with cell service.

“Money was never the reason behind whether or not to entertain the proposal,” Gloyd said.

GAERTNER IS CONCERNED with what she sees as a lack of communication from the trustees regarding this issue. On the morning of April 21, she says that “no cell tower” signs were removed from the neighborhood.

“I saw the signs as a community service. So many community members didn’t know about this,” Gaertner said.

Many residents don’t read the community’s newsletter, Gaertner says. The cell phone survey was advertised on page 5 of the April newsletter. Gaertner believes that something as drastic as a 16-story tower should be placed on the newsletter’s front page.

A town meeting is planned for May, Gloyd said, although a date hasn’t been set yet.

“There is a long way to go before a decision is going to be made, one way or another, on the topic, I’m fairly certain,” Gloyd said.

But Gaertner is worried that the trustees are set on the Landings location.

“Your homeowners association is supposed to protect your property values. How is this protecting it?” she asked.