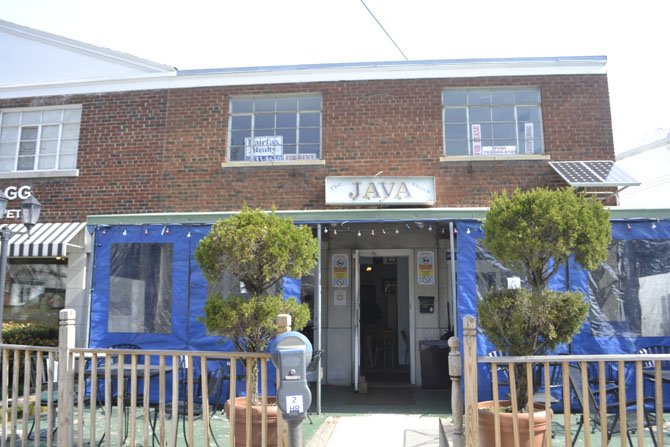 Outside view of Arlington's Java Shack Coffee House. To the right, one of the coffee shop's solar panels where customers can connect to wifi.

Seven years ago, Arlington County decided to go green and hasn’t looked back.

Since the county’s push to reduce greenhouse gas emissions, environmental services officials say that Arlington has saved about $800,000 per year on energy and water from energy efficiency upgrades.

“Energy is something that we often take for granted,” said John Morrill the county’s Department of Environmental Services energy manager. “But when there’s a power outage or when it’s very, very cold outside, all of a sudden that energy we use and need is vital.”

Local county governments across the Washington, D.C. metro area have also come to together to implement plans to address climate change. And according to The Metropolitan Washington Council of Governments, 74 percent of the D.C. metro region’s population lives in jurisdictions that promote energy efficiency and renewable energy incentives.

“Each community needs to do its own interpretation of energy planning that is suitable for its own jurisdiction,” said Morrill. “But our experience has shown that bringing together the diverse stakeholders sometimes with different viewpoints can still result in a constructive, transformative, vision for the future.”

Programs like the Arlington Initiative to Rethink Energy, that promotes the use of smart energy to benefit the overall community, and its nationally recognized Community Energy Plan, that outlines ways the county can reduce its green house gas emissions by 75 percent by 2050, are initiatives that have put the small county on the map for energy efficiency both statewide and nationally.

IN 2011, 54-year-old Arlington business owner Dale Rogers began participating in the Arlington Green Games, a competition through AIRE that challenges local businesses to reduce their energy use, waste and water.

Since The Java Shack Coffee House opened in 1996, Rogers says that he has been a proponent of a green business model because it benefits the environment and is cost effective in the long run.

In 1998, Rogers began using Compact Fluorescent Lamp light bulbs, or CFL bulbs to save electricity. Now, Rogers has changed his water faucets so that they use half the water they once did, has installed solar panel at the top of his coffee shop for customers to use wifi outside and recycles regularly. He encourages customers to use glass cups instead of disposable ones.

“All those things add up,” said Rogers.

Rogers says that overall he has probably saved about 10 percent of his water and electricity costs over the years, but that the upfront costs of going green are sometimes pricy.

CFL lights cost more but will save you its purchase price in electricity costs overtime. But the costs of green paper goods are what Rogers says have cost him the most.

COUNTY BOARD Chair Jay Fisette agrees that that the upfront costs can sometimes be large, but that the county is trying its best to provide incentives for green businesses like Rogers’. 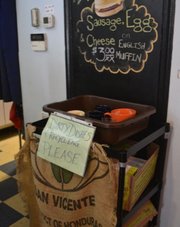 Java Shack Coffee House was one of the first Arlington businesses to take up green ways of running its business such as encouraging customers to use and recycle glass cups over disposable ones.

Some of the current incentives that the county is offering for energy efficient businesses is a lighting rebate program, and for residents, assisting them with federal tax credits for consumer energy efficiency.

“Surely we’re a small piece of the planet, but it all starts with ourselves, our individual choices, our community’s choices,” said Fisette. “Arlington has an ability to set a standard or model behavior that hopefully others can learn from just as we learn from them.”

BUT SOME Arlington residents are still skeptical of going green, and need more information before they take any sides.

Arlingtonian Darrell Green agrees that becoming more energy efficient is beneficial for the community, but does not see how the DES plans are helping Arlington just yet.

“I don’t see how it [Community Energy Plan] can be a benefit just yet, but you only see benefits in time,” said Green.

In January, The American Planning Association nationally awarded Arlington’s Community Energy Plan that was adopted by the county in June for its environmental planning efforts.

Kate Addleson, program manager of the Virginia Sierra Club says that plans like the CEP are examples in which small counties can play a big role in fighting global climate change.

“When energy is prioritized, what we’ve seen is that the paybacks are numerous and almost always exceed expectations,” said Addleson.