‘Challenge of Our Generation’ in Alexandria
Votes

‘Challenge of Our Generation’ in Alexandria 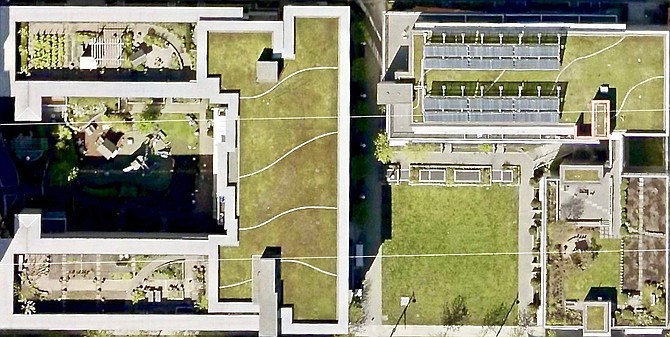 These actions relate to a more comprehensive two-year overhaul, currently underway, of the Environmental Action Plan, one of several of the city government’s top-level plans articulating strategic objectives and roadmaps.

As the primary impetus for tightening the city’s building regulations, commissioners and advocates cited buildings’ contribution to climate change. Buildings accounted for 57 percent of the city’s greenhouse gas emissions in 2015, according to a city government departmental staff report.

“Climate change is the challenge of our generation,” said Jim Kapsis of the city’s Environmental Policy Commission, an advisory body, at the Planning Commission’s meeting on Tuesday, June 4. “The development process is one of the few tools in the city’s toolbox … to address that problem. A majority of our emissions in this city are from buildings and transportation. So that’s why this policy is so truly important.”

The new policy, effective March 2020, would increase standards for new private and public projects requiring Development Site Plans or Development Special Use Permits, two kinds of city government approvals. Minimum standards would increase to LEED Silver (or equivalent), a certification rating, for private development; and to LEED Gold for public development, including schools.

Some thought the policy doesn’t go far enough. David Peabody, a city resident, wants to see the city’s entire building stock convert to net zero energy. He cited a 2018 United Nations report that says, in order to stem the impact of climate change, “global net human-caused emissions of carbon dioxide need to fall by about 45 percent from 2010 levels by 2030, reaching ‘net zero’ around 2050.”

Others worried that the policy as set forth may already prove unrealistic, especially given cost constraints. The certification minimums could increase upfront costs by about one percent for private buildings and by nearly three percent for public buildings, according to a January report from WSP, a consultancy. Constructing public buildings to net zero energy standards could raise upfront costs by nearly nine percent.

“An increased standard for public buildings has the potential to increase city capital costs by $30 to $50 million over the next 10 years,” according to WSP’s report.

“I feel very strongly that we do not have the budget as a city to start building every school to net zero,” said Commissioner Mindy Lyle, though she ultimately voted in favor. In particular, she thinks Alexandria City Public Schools should focus first on eliminating mold problems in its schools, before investing extra to build to net zero standards.

“We just have to make [net zero energy] the default. We have to stop diddling around about cost effectiveness,” he said. “How does not paying for electricity for 30 years not manage to buy us some [solar panels] on the roof now?”

Council will render a final decision at its public hearing on Saturday, June 22.

The Planning Commission also voted Tuesday to take a step toward bolstering, in its view, the provision of open space through private development.

Ten “Shared Expectations” would inform developers about how the city expects them to incorporate open space, and also guide the forthcoming refinement of city policies and regulations.

Among other things, the expectations delineate four roles that open space might serve: form definition (how open space relates to building shape and volume); visual relief between adjacent buildings; outdoor living (areas for sitting and recreation); and environmental benefit.

By adding formal consideration under this framework, Commissioner Mate Macek hopes the community “will be better informed on the quality of open space,” and not just the quantity.

The formal integration of open space and environmental concerns is new.

“Open space as currently defined by the city does not necessarily mean ‘green’ open space,” said Kapsis. “The [Environmental Policy Commission] is trying to change that by making sure that we prioritize open space that delivers environmental benefits.”

“We only have so much land,” said Commissioner Melissa McMahon. “As we develop out our most urban areas … every inch of space we have is valuable.”

The shared expectations would also see open space become a more “fundamental consideration in the planning and design” process.

The Planning Commission will further consider updating the Environmental Action Plan’s open space goals on Tuesday, June 25. Council would potentially take up its consideration at a special public hearing on Tuesday, July 9.