High schools could start as late as 9:15. 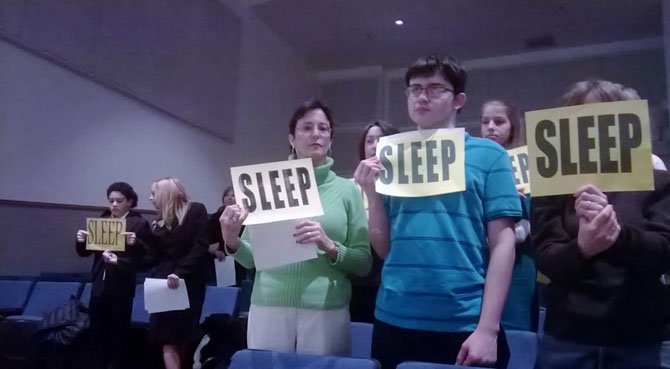 SLEEP advocates gather at a school board public hearing. The Fairfax County School Board is examining options for later start times, to be implemented in 2015. Photo by Janelle Germanos.

Two years after the Fairfax County School Board adopted a resolution in favor of later start times, exhausted teenagers are one step closer to getting a full night’s sleep.

The Children’s National Medical Center recently presented the school board with options for later start times, of which the school board selected four for public discussion. The new start times could be implemented as early as the 2015-2016 school year.

The school board is expected to vote on these options in the fall.

“Given all our research and discussion with stakeholders over the past 12 months, our team strongly believes that later bell changes for Fairfax County Public Schools can be achieved at a reasonable cost in the 2015-16 academic year,” said Judith Owens, director of sleep medicine at the Children’s National Medical Center.

In Virginia, 72 of 95 counties start high schools past 8 a.m. Members of SLEEP in Fairfax, which has been advocating for later start times since 2004, say that the 7:20 a.m. start time of high schools in Fairfax County is having a devastating effect on students’ health and well-being.

“The middle 67 percent of students who fall into the normal category of sleep need would benefit, which is a large, large percentage,” said Daniel Lewin, associate director of the pediatric sleep medicine program at the Children's National Medical Center.

Earlier this year, the school board passed a motion recommending that Superintendent Karen Garza identify savings from the 2014 annual bus route review and earmarks those savings to offset the possible cost of implementing later high school start times.

“This has been an evolution, and it will continue to be,” said Jeffrey Platenberg, assistant superintendent of facilities and transportation services for Fairfax County Public Schools.

After the researchers from the Children’s National Medical Center presented the options, school board members voiced their concerns and opinions. Dranesville district School Board member Jane Strauss voiced her concern that the later start times could cause extra-curricular activities to start early in the morning. Other members were concerned that some options still left school starting too early.

“The one that has high school starting at 9:15, in my view, that is the only one that is either scientifically honest, or politically honest, because that’s the one that actually moves high school times later. The other ones are poking at the margins,” said school board member Ted Velkoff (at-large.)

According to Owens, the studies show that bedtimes would remain the same, but if the start times change by an hour, students receive an additional hour of sleep.

“This change can be accomplished in school districts such as Fairfax that are large and complex,” Owens said.