Safety at a Crossroads in Poor Communities Across Northern Virginia
Votes

Safety at a Crossroads in Poor Communities Across Northern Virginia 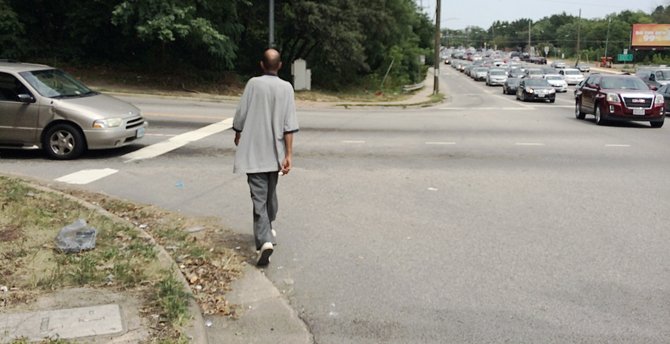 Hamid Farooq tries to cross the intersection of Buckman Road and Route 1, which lacks a crosswalk and pedestrian signals. Photo by Michael Lee Pope.

Hamid Farooq doesn't remember much about the day a speeding Honda almost took him out on Route 1 back in 2009. Farooq, who is unemployed, was walking home from the government office where he receives food stamps. Suddenly, he said, a speeding automobile came out of nowhere and the next thing he can remember is being interviewed by police. He now has a metal plate in his right leg, and he can no longer play soccer. But at least he's not one of the nine pedestrians who were killed along the Route 1 corridor in the last five years.

"It's not safe," said Farooq while walking down a segment of Route 1 near Buckman Road that has no sidewalk. "It's not safe at all."

"If you were to look where these dots are on a map and drive though them, you'll see that sidewalks and street lighting and raised medians will not be as common as they are in other neighborhoods," said Mike Maciag, data editor for Governing Magazine. "Poorer neighborhoods don't have as much clout as an affluent area."

NORTHERN VIRGINIA statistics showed the same trend as the national database. Across America, pedestrians are killed at disproportionately higher rates in poorer neighborhoods. The database includes 22,000 pedestrian fatalities from 2008 to 2012, nationwides. Low-income census tracts in metropolitan areas showed fatality rates about twice that of more affluent neighborhoods. Poorer neighborhoods have a rate of 12.1 deaths per 100,000 people.

"Years ago, it would have been which community didn't have paved roads," said Jon Liss, executive director of Tenants and Workers United. "Fortunately now we've all got paved roads, but sidewalks are still lagging far behind."

Nowhere are the pedestrian fatalities more pronounced in Northern Virginia than the cluster of poor neighborhoods along the Route 1 corridor, a notoriously traffic-clogged stretch from the Capital Beltway to Fort Belvoir. The area logged nine pedestrian fatalities in the last five years. Five of the victims were white and four were black, and their ages ranged from 11 to 87. The one thing they all had in common is that they live in a poor neighborhood, where sidewalks are limited and intersections don't have crosswalks.

"Fairfax County has not done a good enough job on pedestrian safety in the Route 1 corridor," said former Alexandria Mayor Kerry Donley, a former member of the Alexandria Transportation Commission. "I think they've made some improvements in recent years, but even they would admit that there's a lack of infrastructure."

"Ironically, people who are the most dependent on walking are the ones most likely to have poor pedestrian paths or no sidewalks," said Liss. "But folks who actually have cars have great sidewalks and pedestrian paths."

Government leaders say they are working to make every intersection safe, although limited funding is available for transportation projects. The Fairfax County Department of Transportation currently has 77 pedestrian projects underway, either in design land acquisition or construction. This fall, Fairfax voters will consider a $78 million bond referendum for pedestrian safety and sidewalk improvements all over the county. Several of the projects are on Route 1.

"We've got a lot of work that we are doing out there to try to make it more pedestrian friendly," said Todd Minnix, chief of Transportation Design Division. "We have three intersections where we are getting ready to go to construction with new signals and crosswalks and a fourth one where we need to get land rights, so that one is running a little behind."

FOR PEDESTRIANS willing to risk life and limb, getting across the street quickly often takes precedence over getting across the street safety. Take the intersection of Ladson Lane and Route 1, for example. Back in 2011, a 49-year-old white man was killed here. One recent afternoon, Kori Ford dogged and weaved her way through delivery trucks and speeding sedans to get to a 7-Eleven. Although a crosswalk was only a few feet away, she says she never uses the crosswalk because it would take her out of a direct path to the store.

"I'm not going to go out of my way to go through the crosswalk. I'm going to cross," she said, adding that she was not concerned about the pedestrian fatalities along the road. "People die."

Others take a less fatalistic approach. Less than a mile away, three more pedestrian fatalities have taken place in the last five years. The stretch from Ladson Lane to Janna Lee Avenue is the most dangerous spot in the county, and a visit to the area shows why. Most of that stretch does not have any sidewalk at all, although a well-worn path along the side of the road shows how popular it is for pedestrians. And the intersection of Bukman Road and Route 1 lacks crosswalks or pedestrian signals.

"If they were really worried about people's safety, they would have done something already," said Luis Callejas, whose parents own Lucas Tacos. "Obviously they're not."