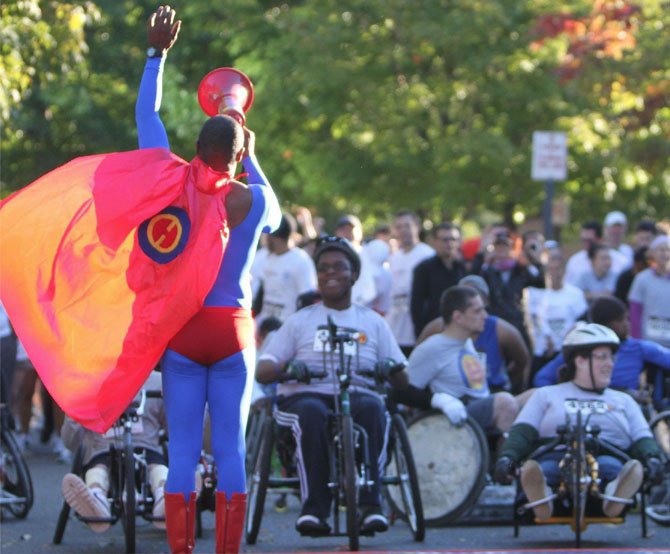 Harry Freedman wear his baseball cap low over his eyes. He speaks quietly, recounting the accident that made him start a 5K eleven years ago.

It was just another day of work for him at Auto Recyclers of Leesburg until an 18 ton front loader backed up onto him, crushing his leg.

He arrived at the hospital in a helicopter under “code blue” - what he says is when the paramedics give up hope.

When he came out of the hospital 54 days later, he had a prosthetic leg.

Eleven years later, his Super H 5k “Walk and Wheel” in Tysons Corner is attracting more adaptive athletes every year. Prosthetic legs, wheelchairs and handcycles are the first to whiz by due to tradition. Then the runners - who have the advantage with both legs - take off.

As a triathlete, training for a race again - his race - felt like a part of the healing process at the time. “The terrible thing I went through gives it some meaning,” he said. “It takes a lot to survive something like this, and this was a part of it.”

This year’s race will begin at the Sport and Health Fitness Club in Tysons at 8 a.m. on Sept. 21.

That first race was to help to offset the cost of a running and biking leg. Now, him and his wife Renie Freedman, donate the proceeds to the adaptive sports program at Medstar Rehabilitation Center. Last year, the 5k made about $40,000 thanks to the sponsors and 400 runners who participated in whatever way they could. 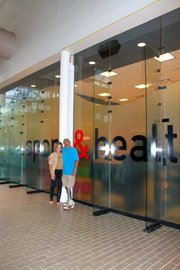 His training partner, Don Brazelton, was the one who originally convinced him to start the 5k. Brazelton was a personal trainer at Sport and Health, a place that supported Harry when he was learning how to walk again. Now every year, Brazelton wears a Super H costume - which looks a lot like a Superman costume, but with an H on his chest - to get everyone excited before the race.

“Being an instructor here, he has to convince people to do things they might not want to do,” said Harry. “He has personality and the ability to turn people around.”

Rather than running this year, Harry will be leading the race in Volkswagen Bug - one of the race’s newer sponsors. The founding sponsor of the race is Darren Star of Sex and the City fame. He still donates $5,000 per year.

Even though the money is for a good cause, Harry said his favorite part is watching the paraplegics and runners conquer the last hill of the race.

“These kids that come in their wheelchairs and handcycles, they go up that hill and when they get over it, it’s hard to describe,” he said.

His face lights up - the only way he knows how to describe the feeling of conquering a physically and mentally draining experience.

He jokes with his wife, who he recently celebrated 40 years of marriage with, that she won’t get rid of him any time soon. She laughs.

“You just have to go through life and make the best of it,” Renie said.