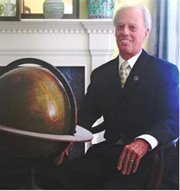 Potomac's Charles M. Croner, Ph.D. is a geographer and survey statistician extraordinaire — a U.S. Center for Disease Control and Prevention (CDC) leader who will be inducted into the Urban and Regional Information Systems Association's (URISA) Geographic Information Systems (GIS) Hall of Fame in New Orleans this September for significant and original contributions to his profession.

Croner's list of accomplishments include a number of "firsts." At CDC, he served as the founding editor of the bimonthly digital newsletter Public Health GIS News and Information. This pioneering 1994-2006 publication established the CDC as the lead agency for the timely dissemination of GIS and public health-related developments worldwide. Croner also provided leadership as the first Department of Health and Human Services (HHS) representative to the Federal Geographic Data Committee (FGDC) where he "served with distinction" having guided HHS to member-status. In addition, he created CDC's first GIS Awareness Week, a Cartography and CIS Guest Lecture Series, the Public Health GIS Users Group and the Internet GIS Guest Lecture Series.

Croner earned a B.S. in geography from Towson University and an M.S. and Ph.D. from Michigan State University, also in geography. Additionally, he studied statistics at Harvard. Prior to graduate school, he served as an infantry officer and helicopter navigator in the US Marine Corps.

"The military served to advance my geographic foundations, both through formal land and air navigation instruction. It instilled in me an indispensable perspective of mapping in dynamic time and space," he said.

Croner was one of a few professional geographers employed at the CDC in 1972. He had the insight to position CDC into one of GIS and public health leadership.

"I believed CDC's outstanding reputation for medical intervention, including life-saving vaccines and the prevention of costly infectious and chronic diseases could benefit further from the inclusion of geography into the emerging multidisciplinary CDC approach to public health science. The timing could not have been better," he said.

Through the newsletter, the role of geography at CDC reached nationally and across the globe.

He is also responsible for the successful development of federal GIS interagency agreements with the U.S. Bureau of Census, the U.S. Geological Survey, and the U.S. Department of Housing and Urban Development to leverage geospatial investments, for creating the first long-term collaborative small area GIS study of minority health between CDC and Cleveland's Center for Community Solutions and for having contributed to the planning and instruction of the USGS Historically Black Colleges and Universities Summer Faculty CIS Workshops Program.

Croner has been recognized with numerous awards during his career. In 2007, he received the highest award from the private sector and many awards from government, academia and the CDC. He is the only Hall of Fame Inductee by URISA in 2014.