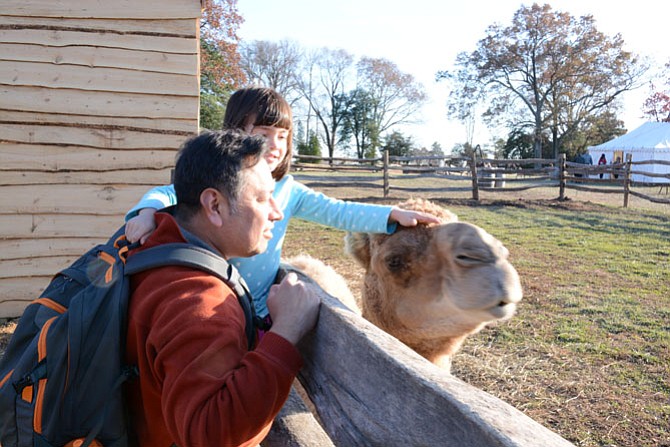 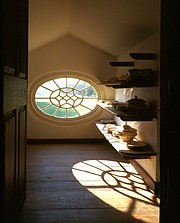 The oval window in the rarely opened third or “garrett” floor of the Mount Vernon mansion faces out to the bowling green.

They came for the camel. Alberto, Daniela and their daughter Josephine Rendon of Alexandria have yearly passes to George Washington’s Mount Vernon, so, “We come here almost every weekend,” said Alberto. “We love to walk around and see the animals.” On this visit in particular, the animal of note was Aladdin the camel.

Aladdin has been taking up residence at Mount Vernon during their Christmas program since 2008, since he was born. The placard in front of Aladdin’s pen in the “Winter Encampment” explains that around Christmas 1787, General Washington “paid 18 shillings to bring a camel to Mount Vernon for the enjoyment of his family and friends.”

Though Washington’s camel may have come from further afield, Aladdin hails from Full Moon Ranch Home in Berryville, Va.

The Christmas program at Mount Vernon kicked off Nov. 28 and runs until Jan. 6, 2015. Aside from Aladdin, other seasonal attractions include historical lessons in how chocolate was made during the Washington’s time (by hand, crushing ground cocoa bean nibs between two pieces of lava rock), evening candlelight tours of the estate and the ability to peek into the usually closed third floor of George Washington’s mansion.

“There’s a great authenticity to the place, get a sense of what holiday celebrations were like,” said Rebecca Aloisi, Mount Vernon vice president of marketing. “There’s a lovely festive feeling in the air.”

The mansion’s third floor was mostly storage space for the Washingtons, though the history interpreters at Mount Vernon believe the General’s wife Martha slept in a bedroom chamber there after he died. Visitors can also look up into the octagonal cupola, the iconic apex of the mansion, that was used to help cool the building up until the 1990s.

Last holiday season, the “New Room” of the mansion was under significant renovation. Long thought to be primarily a dining room, the estate researchers now believe it was more of a general entertaining space or salon, where Washington spent time well into the night. The renovation was completed earlier in the spring.

Additional seasonal events include the Dec. 12 release of a new batch of aged and unaged whiskey in the style George Washington himself would have distilled, a Dec. 14 visit from former White House chef John Moeller for cooking demonstrations and a book-signing, and the first-ever public display of fireworks for Mount Vernon visitors over the Potomac River on Dec. 20.

But during the day, the estate maintains its bucolic calm. “It’s brilliant, beautiful and very peaceful,” said Michael Fernando, visiting from England.

Virginia Taylor and Candace Pellot were also out to enjoy the quiet scenery and gardens. “We just like coming here,” Taylor said, “and to see how the gardens are, how much they cut it back.”

And, of course, Taylor and Pellot were there to see Aladdin.