Cheery and Cheeky Humor Coming to the Alden
Votes

Cheery and Cheeky Humor Coming to the Alden 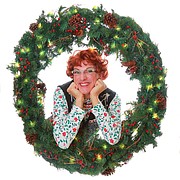 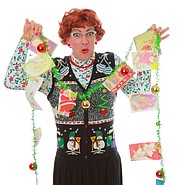 "A Kodachrome Christmas" with Jay Byrd as Earlene Hoople.

Take a sleigh ride of speeding fun with the “Queen of Rural Media” this holiday season as "A Kodachrome Christmas" barrels into the Alden Theatre at McLean Community Center. "Kodachrome" is written by Pat Hazell who wooed audiences last year with his "The Wonder Bread Years."

"We booked 'A Kodachrome Christmas' by request, actually," said Sarah Schallern, performing arts director at The Alden. Last season after the performance of "The Wonder Bread Years" audiences asked what other shows from Pat Hazell we could bring. "Audiences loved him so much," we are producing 'Kodachrome' for a three-performance run, something that’s very rare for us. We think it is just what people want this season."

So, enter the quite colorful world of an endearing, comic cable access TV hostess named Earlene Hoople. She is taping her annual one-woman Christmas Special; you are her live audience. It is her first Holiday Season since she became recently widowed. She is feeling very nostalgic, but still goes on with the show in her always bantering manner. There are outrageous comments, kodachrome-infused family slide shows, letters to Mrs. Claus, fresh-baked cookies, visits from local celebrities as well as audience participation. There are also "commercials" aimed to bring laughter.

Oh and one other thing, Earlene has a secret. Shhh, don't tell anyone. But think of Hoople as a very heartfelt Tootsie-like auntie character as the talented comic actor Jay Byrd stars in the role of the good-natured woman. Byrd as Hoople may also be expected to delight patrons in versions of the current vogue for ugly Holiday sweaters; never know. The set will be homey and comfy; just right for a winter's night.

In a recent interview with Pat Hazell, a former Seinfield writer, the caring sense of how he developed the character of Earlene Hoople was clear. Hazell described his creation of Earlene Hoople, as "nutty but real, and all in the spirit of the Holidays." The show is aimed to capture audience's heart with its folksie sweetness and "irreverent but wholesome humor done with plenty of winks." It is a follow-up to his audience celebrated "The Wonder Bread Years" a salute to the Baby Boomer Generation.

Time travel into another place and times as the Alden brings an arms full of Holiday cheer and mistletoe. All the world can be a sunny and bright even in the depths of a cold blustery day with "A Kodachrome Christmas.”