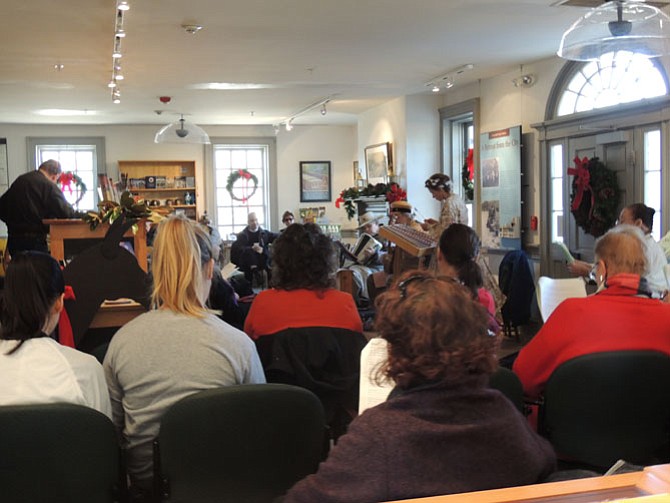 The crowd enjoys the music. Photo by Susan Belford. 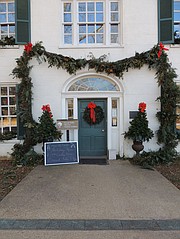 The sounds of 19th century dulcimer music filled the Great Falls Tavern on a sunny, temperate Sunday, Dec. 7. Hikers, cyclists, walkers, passers-by and families gathered to hear the seasonal tunes played by Gilmore’s Light Ensemble – a group of authentically-dressed musicians who entertained with the music of long-ago as well as holiday songs and an invitation to “Sing-along.”

Every year, the Friends of Historic Great Falls Tavern facilitates the holiday concert at the Historic Great Falls Tavern at the C&O National Park in December to celebrate the holiday season with joy and music. Volunteers dress in period outfits, welcome guests, lead the singing and serve cookies and hot cider. The Civil War music group, Gilmore’s Light Ensemble, recreates through music the atmosphere and ambience that existed during the 19th century. Their instruments consist of a hammered dulcimer, accordion and banjo, all replicas of instruments from that period. The music included a variety of early American folk music along with Christmas carols. The group was led by Stephen Adamski on the banjo and included Ellen Jimerson on the dulcimer. They were accompanied by guest singer Jill Worley.

Adamski invited everyone to dance, explaining that “Jeb Stuart would often stop by when groups were entertaining – and people would get up and dance. It was exciting seeing the hoop skirts flying around. They played popular tunes such as ‘Fanny Power’ and the ‘Rose of Alabama.’ Songwriters made their living by traveling around and writing songs about local people.”

The group also played a number of Christmas Carols including “Good King Wenceslaus,” “Deck the Halls,” I Saw Three Ships A’Sailing,” and more.

Don Harrison, president of the Friends of the Historic Great Falls Tavern, said, “We hold this event every year to bring people out to the park and to entertain those who are here. It’s a very pleasant afternoon that puts everyone in a wonderful holiday spirit.”

The Friends of the Historic Great Falls Tavern was founded in 1973 as a non-profit dedicated to the preservation of the Great Falls Tavern. The Friends also support projects such as raising funds for the construction of the replica packet boat, the “Charles F. Mercer,” purchasing the mules (Dolly and Eva) who pull the Mercer on the canal boat rides, maintaining the Tavern’s infrastructure, planting flowers and plants and supporting other National Park Service partners along the length of the C&O Canal. They also hold a number of social events.

Park Ranger Mark Myers (nicknamed Possum) has served as a ranger at the C&O for 20 years. “This event is one of my favorites throughout the years,” he said. “This group of musicians really brings back the history of the park and how it must have been during another era.” Myers is in charge of decorating the Tavern for Christmas every year.