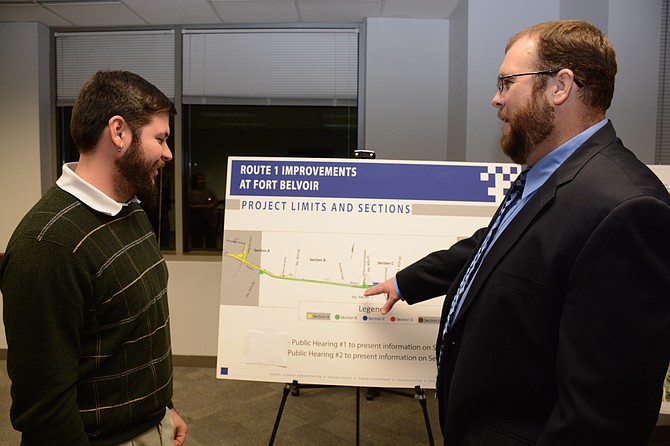 Tim Brown (right) with the Eastern Federal Lands Highway Division of the Federal Highway Administration points out the five areas of U.S. Route 1 improvements to Adam Vencill, a project team member who lives in Maryland. Photo by Tim Peterson.

The project team has broken the three and a half-mile stretch of U.S. Route 1 being improved into five main sections.

Douglas White is the “unofficial mayor” of Accotink Village, he said. He was at the South County Center on Dec. 10 to hear project updates from members of the U.S. Route 1 Improvements project team handling the widening of the major roadway.

“I’m here so I can tell everyone in the community what’s going on,” he said.

Several Accotink Village buildings are on the demolition list for this winter and spring, according to Mitch Rubin, Design Build Project Manager with the joint contractor team Corman-Wagman, based in Lorton.

Some of the other key progress updates Rubin presented include putting three drainage pipes across the road at Mason Run, installing storm drains and storm drain ponds, and “cutting and filling” stretches of dirt to widen the heavily trafficked roadway.

Depending on the weather, they’re also hoping to demolish the existing bridge and build a new one over Accotink Creek.

“If Mother Nature is good to us this winter, it’ll be sooner,” said Rubin. “Right now she’s not cooperating very well with us.”

Widening U.S. Route 1 to a six-lane divided highway has been on the county’s comprehensive plan since the 1970s, according to Jane Rosenbaum, a senior transportation planner with Fairfax County who was at the meeting.

“We were doing incremental widening, from two to four lanes, some development widening in around Inlet Cove,” said Rosenbaum. “But we never had enough money to put in such a huge project. 3.7 miles: It’s a huge chunk of a road building.”

But when the relocation of Walter Reed Army Medical Center and other Fort Belvoir realignments promised to add 9,000 vehicles per day on U.S. Route 1, according to Rosenbaum, the comprehensive plan needed a booster.

Del. Scott Surovell spoke after Rosenbaum and explained how U.S. Rep. Jim Moran (D-8) helped secure $180 million in grant money for the project, collaborating with the Office of Economic Adjustment and the Department of Defense.

In April 2013 the contract was awarded to a joint venture of Corman Construction, Inc. and G.A. & F.C. Wagman, Inc., with design work by A. Morton Thomas and Associates, Inc. Consulting Engineers. Design lasted until spring 2014, at which point construction began. The project team anticipates a completion date of Feb. 19, 2016.

The contractors are working under guidance from the Eastern Federal Lands Highway Division and Virginia Department of Transportation.

Surovell responded to generally positive feedback from the public audience about the progress so far. “This project is coming in on time and under budget, and it’s appearing there’s money left over from it,” he said. “This is happening right here in our community, one of the biggest road projects in the county. And I’ve gotten virtually no complaints from my constituents about it.”

For updates on lane closures and traffic flow changes, visit the project Facebook page or website at www.rte1ftbelvoir.com.