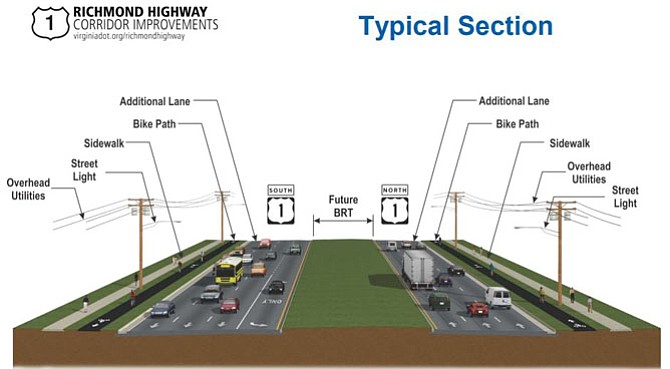 Route 1 is the heart of Mount Vernon. It runs right through the center of the area, all of the streets and commercial areas more or less connected to it. But it is clogged. The Metro stops at Huntington, and public transit south of there is limited. Those traveling south almost always need to do so by car, but in some places the six-lane highway narrows to four lanes. It’s not a roadway in a healthy condition.

But that’s starting to change.

The Embark Richmond Highway initiative is a series of ongoing projects and proposals to fix transit along Route 1. Some projects like highway widening are already in process, others like an extension of the Metro line are still in the early conceptual stages.

Del. Paul Krizek said there are three main challenges on Route 1. The first challenge is that narrowing to four lanes through Mount Vernon.

“That issue, which is fundamental to keeping traffic flowing, is being addressed with the new road widening, called the Richmond Highway Corridor Improvements Project,” said Krizek.

Construction began on street widening in June 2013. On Aug. 4, 2017, officials celebrated the completion of a widening of Route 1 between Jeff Todd Way and Telegraph Road, the first stage of widening along Route 1. But the next stage is three miles of widening north of Jeff Todd Way, up to Napper Road near the border with Alexandria.

“That issue, which is fundamental to keeping traffic flowing is being addressed with the new road widening, called the Richmond Highway Corridor Improvements Project, a $200 million plus project slated to break ground in early 2023,” said Krizek.

The second major challenge for Route 1 is the limited options for north-south travel except the George Washington Parkway, which Krizek notes is not built for commuter travel and doesn’t extend south of Mount Vernon. So Route 1 is one of the only options for travel in Virginia south of D.C.

The third challenge is Ft. Belvoir, an army base in Fairfax with more workers than the Pentagon. According to Krizek, almost all of the gates into the base are off of Route 1.

“Our community is very convenient for those that work on the base, but many base workers commute from Maryland and other communities outside of ours. Congestion and travel phone apps/GPS have pushed too many commuters to cut through our secondary roads such as Old Mount Vernon Rodd, Fort Hunt and Sherwood Hall Lane, and, as I mentioned, the GW Parkway.”

These multi-layered problems are going to take multi-layered solutions. According to Krizek, one of the major milestones was in 2015 when state Sen. Linda Todd Puller and then-Delegate Scott Surovell were able to get funding for the Route 1 Multimodal Alternatives Analysis study. The study recommended implementation of a Bus Rapid Transit (BRT) system to be built through, a three-mile extension of the yellow line, widening the road and adding bicycle and pedestrian accessible travel.

But according to now state Senator Surovell, these improvements rely on $2 billion in infrastructure funding from a combination of sources, half of which is expected to come from federal sources, particularly from the Federal Transit Administration’s New Starts program. This was zeroed out in the Trump administration’s proposed budget, but Surovell said he’s not concerned.

“No one is taking that seriously,” said Surovell. “I don’t even think Republicans are taking it seriously. The Federal [Government] is going to need to fund infrastructure.”

Even without the yellow line extension, the widening, new bike lanes, new sidewalks, and a cleared space for later BRT implementation is estimated to cost $215 million, of which only $25 million has been allocated.

“The biggest obstacle is always about where we find the money,” said Krizek. “We must compete with many regional infrastructure requests.”

Of the plans for improving transit along Route 1, the extension of the yellow line seems like the most remote.”

The Metro is currently facing a series of challenges related to poor maintenance and funding difficulties, but Surovell said the Metro will eventually work past those and will begin to expand again. His vision is a yellow line that extends from Huntington down to Occoquan.

“I campaigned on getting the yellow line extended down Route 1,” said Surovell. “[The Metro extension] is 10-15 years from now. We can’t stop planning because of current [limitations]. In 10-15 years, the Route 1 corridor is going to look like the Arlington Metro corridor. How we do that while preserving the affordable housing is another challenge here over the next six months. And in the longer term, we need to make Mount Vernon a community that is attracting families and jobs.”

Public hearings on the Richmond Highway Corridor Improvements are scheduled for mid-2018. Final design is expected in late 2018 with Right of Way acquisition and utility undergrounding in 2019. If the project is funded and everything goes smoothly, construction on the highway improvements is expected to begin in 2023 for completion in 2026.

“Route 1 is the key to everything,” said Surovell. “Retail, housing, development: it all starts with Route 1.”