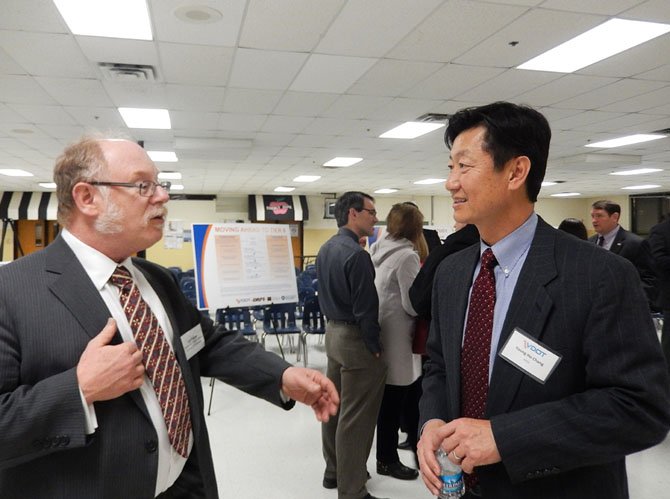 *Managed Lanes: Conversion of the existing HOV lane into either a one or two lane (in each direction) facility that would operate as a high-occupancy toll facility where only high-occupant vehicles would be exempt from paying a toll.

*Metrorail Extension: Metrorail service extending west from Vienna to either Centreville or Haymarket.

*Intermodal Connectivity: Availability of a full range of travel modes within the corridor, as well as availability and functionality of connections between travel modes. For example, both lane and transit improvements could be done together.

*Safety Improvements: Safety improvements that address both location-specific and corridor-wide safety concerns. These could include adding an auxiliary lane between two, heavily traveled interchanges.

*Transportation Communication and Technology: Continued enhancements to ITS technology for all modes in the corridor, including traveler information, corridor and incident management, and transit technology.

It’s said that nothing’s certain but death and taxes – but most of the time, traffic congestion on I-66 can be added to that list. So VDOT’s seeking input from the public on how best to alleviate it.

Last Thursday, Jan. 30, in the Oakton High cafeteria, VDOT revealed 10 concepts identified by it and by the Department of Rail and Public Transportation to increase capacity within the I-66 Corridor. It also presented options for more travel-mode choices, improving troublesome interchanges, addressing spot safety needs and making travel more efficient.

"This is the first of many meetings," said Paul Nishimoto, VDOT project manager with Mega Projects. "We’ll also meet with the local politicians and, eventually, a decision will be made about which concepts should go forward."

He said no timeline has been established yet for when this decision will happen. Furthermore, said Nishimoto, "We also need to decide how these concepts could be funded." But whichever concepts are chosen will then be subjected to a Tier II Environmental Impact Study (EIS).

THE 10 CONCEPTS (see sidebar) were developed during the Tier I EIS to address existing and future transportation needs in the I-66 Corridor from Route 15 in Prince William County to I-495 in Fairfax County.

In addition, in June 2013, innovative and workable ideas were sought from citizens and the private sector. The suggestions included creating a public-private partnership to implement the multi-modal improvements.

Several private-sector firms expressed interest in developing and operating toll lanes along I-66, and some wanted to construct – but not operate – a bus rapid transit (BRT) system in the Corridor. It was suggested that this system operate in managed (toll) lanes and that both buses and toll roads could potentially be replaced by a future extension of Metrorail.

At Oakton High last week, local officials and residents alike came from several areas of Fairfax County to see display boards of the 10 concepts and discuss the proposals with VDOT representatives and consultants. Among them were Supervisor Pat Herrity (R-Springfield) and Sully District Transportation Commissioner Jeff Parnes.

"Since 2008, I’ve advocated for an express-lanes-type project," said Herrity. "It gives you additional capacity, congestion-free mass-transit and carpooling. And if you don’t want to pay to take the express lanes, you’ve still got a faster way to get to work. It’s all about choices."

He said I-66 is such a gridlocked Corridor that, if it’s fixed, it’ll also improve many other roads in Fairfax County that drivers are using instead to avoid the I-66 traffic. For example, said Herrity, "I use Braddock Road all the time when I should use I-66. And the express lanes on I-495 have been a huge success and also relieved congestion on the side streets."

Adding that BRT could also be part of the solution, Herrity said express lanes provide "a guaranteed speed to run express buses. But for rail to be practical, you need Tysons Corner densities, so it wouldn’t work well in places like Centreville and Fairfax Corner."

He suggested that express lanes could be implemented via a public-private partnership. "It’s a good way to finance the project," said Herrity. "We need creative solutions. My hope is that we see an express-lanes project underway as soon as possible so we can improve the lives of our citizens."

While noting that the long-term solution to I-66’s congestion is rail, he said express lanes "can be done quickly and are supported by the Board of Supervisors as the interim solution."

"Thirty-five years of study – and we still don’t have the process going forward," he said. Calling the 10 new proposals "just concepts to be advanced," Parnes said, "We don’t know which ones will go forward or when a decision will be made. We’re still up in the air."

Regarding his own preferences, he said, "I favor rapid transit down the I-66 Corridor – VRE to Gainesville, bus rapid transit or light rail or Metrorail to Centreville."

In the interim, said Parnes, "I can support BRT or managed lanes, but I can’t envision them ripping up the managed lanes and putting Metrorail in their place. They’d have to be complementary. I’m looking forward to VDOT’s solution – it’s been a long time coming."

FOR MORE INFORMATION on the I-66 improvement project, go to www.helpfix66.com and click on "I-66 Corridor Improvements."