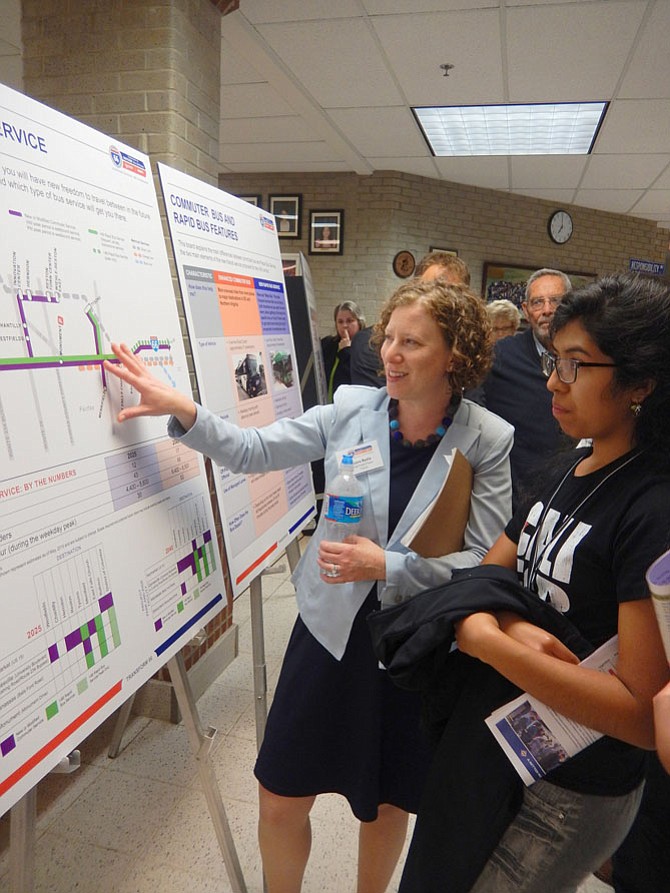 VDOT plans to improve travel on the 25 m

The crowd at Bull Run Elementary listens to the speakers.

iles of I-66 between Route 15 in Haymarket and the I-495/Capital Beltway. So it’s created three alternatives and will take the best elements from each — tempered by residents’ comments from several public hearings — and develop the final design.

Currently proposed are two express lanes and three regular lanes in each direction. The express lanes would be free to buses and HOV-3 (converted from HOV-2) vehicles. Non-HOV cars would pay tolls with pricing based on congestion. The regular lanes would be free and open to all traffic. There’d also be ramp-to-ramp connections to help drivers more safely enter and exit I-66.

The plan includes high-frequency, rapid bus service beyond peak traffic hours for more predictable travel times. And there’d be direct access between the express lanes and new or expanded commuter parking lots. Existing interchanges will be studied, plus the feasibility of replacing or widening I-66 overpasses and bridges, where needed.

Bicycle and pedestrian access parallel to the highway is also being evaluated, as is the possibility of having Metro within the I-66 right-of-way. The financing method will be determined later, but the project cost is expected to exceed $2 billion. Design public hearings will be held in 2016, with construction earmarked to begin in 2017 and end in 2021.

“I-66 today carries over 200,000 vehicles a day in the most congested sections,” said VDOT Deputy District Administrator Renee Hamilton. “We want to reduce neighborhood cut-through traffic by having people stay on I-66. And we want to provide diverse travel choices in a cost-effective manner.”

She was speaking on Wednesday night, June 3, before hundreds of people in Bull Run Elementary’s cafeteria. Ringing the room were dozens of maps showing the project area and possible traffic changes; and outside in the hallway before the meeting, people were able to see more maps and charts and speak with VDOT representatives and consultants.

“It’s a multimodal solution, not a road-widening project, and transit is integral to its success,” Hamilton told the crowd. “And your input is very important.” With future traffic only expected to increase, she said studies show something must be done to fix I-66. “The build alternative can move 35-85 percent more people in the morning peak period than if we did nothing; and in the afternoon peak, 40-90 percent.”

She said the goals are to reduce the hours of congestion, move more travelers during rush hours and improve people’s speeds. Another aim, said Hamilton, is to decrease traffic on parallel roads, such as Routes 29 and 50, that people often use now to avoid the gridlocked I-66.

Another critical component will be a new, commuter-bus service into major destinations, plus new rapid bus service that’ll run all day and portions of the weekend for reliable travel time.

“We’ve held more than 119 meetings on the project, to date, and we’ve received over 1,000 emails, and we answer them,” said Hamilton. “We’ll assess all the comments and present our recommendation to the Commonwealth Transportation Board. To be included in the record, we must receive public comments by June 18.”

State Sen. Dave Marsden (D-37) told those attending, “We’re going to have to come up with some creative solutions here. But we need to hear from you to make this work because you are the users.”

“We’ll keep working with people to minimize impacts, but this is a major project,” said Supervisor Michael R. Frey (R-Sully). “This will change the area, but it’s got to be done. We’ve got one chance to improve east-west transportation in Northern Virginia. This is the corridor we have to fix to move the most traffic.”

“This is our one shot, so we need to do it right,” he continued. “I strongly believe this is the most important project we have for Northern Virginia. We want this to be complementary to and compatible with our community.”

Various area residents also spoke. “One of the four lanes along 12 miles of I-66 would be converted to HOV, thereby reducing the number of lanes,” said Phil Hargis of Chantilly’s Franklin Glen community. “How will that improve congestion? Does it make sense to build something like this? Instead, have four general-purpose lanes, extend Metro and fix the interchanges.”

Vienna’s Mike Herka said 150 acres of trees would be cut down and VDOT should, instead, “use the shoulder lanes for through travel to increase capacity without widening.” And Fionnuala Quinn of FABB (Fairfax Advocates for Better Bicycling) was concerned about biking and walking access — and especially safety — at the ramps and roads crossing under I-66.

David Wagner bikes to work in Fair Oaks from Annandale, but called it “dangerous. Our community is a nightmarish, traffic dystopia, so there should be some kind of protected bike lane.”

Representing the Fairfax County Federation of Citizens Associations, Jeff Parnes said, “Although building light rail from Haymarket to the Vienna Metro station would provide somewhat better congestion relief at a much lower price than extending the Orange line, light rail does nothing to alleviate the Rosslyn tunnel choke point. We prefer the implementation of a true, bus rapid transit system (BRT) in the interim.”

“[It] would allow buses to use the HOV lanes inside the beltway and significantly increase the capacity of the corridor,” he continued. “The project should be designed with future extension of the rail in mind. BRT stations should be built in the middle of I-66 with pedestrian bridges and escalators similar to the Orange and Silver lines.”

Next, Bill Niedringhaus of the Potomac Heritage Trail Association recommended direct, natural-surface trail access to the Big Rocky Run Stream Valley from Braddock Road at Route 28 in Centreville. He also urged VDOT not to miss a “once-in-a-generation opportunity” to build a trail along Route 123 linking the City of Fairfax and Oakton.

Meanwhile, Alicia Coleman of Cabell’s Mill feared history would repeat itself. “Twenty-one years ago, I-66 was widened and I asked, ‘Where’s the rail?’” she said. “HOT lanes are under-utilized and only cause more congestion; rail is needed.” Furthermore, she warned attendees, “My neighborhood had to build its own sound barriers. So just because sound walls are on the plan as ‘proposed’ doesn’t mean VDOT will really build them.”

In addition, Centreville’s John Kuchenbrod of the Rocky Run community wanted shoulders on both sides of the road because, “when there’s an accident in the fast lane, traffic is stopped while it’s cleared away. And, because it’ll still be a bottleneck, separate the people on I-66 east trying to get to Route 28 north from the people getting on I-66 east from Route 29.”