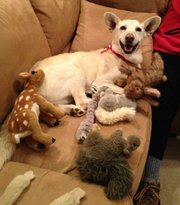 Bianca playing with toys at her new home: She went home with her new mom on Feb. 19, and she is doing great.

Bianca, a nine-year-old, female, German shepherd mix dog, had been living her life on the end of a chain in a rural part of Virginia. In late January, an unknown stray dog approached Bianca and attacked her. Bianca’s owner came outside and in an attempt to stop the attack he hit both dogs with a shovel, striking Bianca over the head and injuring her. Rather than pursue vet care, the owner drove Bianca to the local pound and surrendered her. For the next 36 hours, Bianca sat with no medical care, until a sympathetic staff person called the shelter’s rescue partner at the Highland County Humane Society in rural Virginia.

Highland County Humane Society rescued Bianca from the pound and got her emergency medical treatment. She was taken to a foster home to recover and receive further treatment and was transported to the Fairfax County Animal Shelter on Valentine’s Day. She was made available for adoption and her story was shared on the shelter’s Facebook page, where it caught the attention of a long-time shelter supporter and adopter. The woman’s beloved dog Princess (adopted from the shelter in 1999), died on Valentine’s Day at the age of 18, on the same day that Bianca’s story was posted. She knew that she was meant to help give poor Bianca a second chance. She immediately contacted the shelter and made plans to come and meet Bianca. Bianca went home with her new mom on Feb. 19, and she is doing great.