‘We Will Not Tolerate Unsafe Driving’
Votes

‘We Will Not Tolerate Unsafe Driving’

Police want motorists to get the message from their new cruiser. 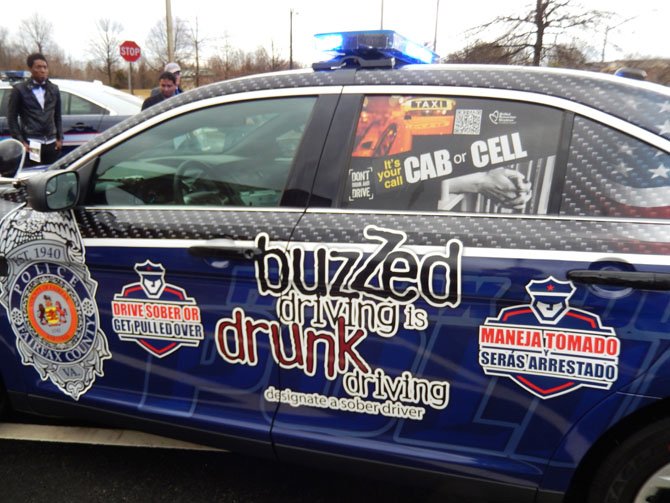 Driver’s side message warns people not to drink and drive. Photo by Bonnie Hobbs.

There’s a new weapon in the Fairfax County Police Department’s arsenal, but this one has four tires and an engine. It’s a new cruiser covered with messages warning people not to drive impaired or distracted.

It was unveiled on Friday, Feb. 21, at the Sully District Station, and the station’s commander, Capt. Ed O’Carroll, explained its significance.

"This is a special day for the Police Department," he said. "We’re here to launch an innovative idea to highlight traffic safety, reduce crashes and save lives. Enforcement, education and awareness are our goals. We want to be visible with what we do, so we’re putting it out front — people need to know we mean business."

O’Carroll said the showy, new cruiser will let people who drink or use drugs before getting behind the wheel — or who text while driving — know that "we’re out there. Drivers who are impaired, aggressive, distracted or unbuckled, we will find. The Police Department is committed to this."

A 2013 Ford Taurus Police Interceptor, the vehicle was already part of the department’s fleet and is a fully functional patrol vehicle equipped with all the essentials of other cruisers. But it’s been professionally wrapped with eye-catching messages on the back, front and sides. Each portion of the vehicle is dedicated to a particular, traffic-safety issue.

The driver’s side bears the words, "Drive sober or get pulled over," and "Drive drunk and you’ll be arrested," translated into Spanish. It also tells people, "Buzzed driving is drunk driving – designate a sober driver," and reminds them, "It’s your call: cab or cell. Don’t drink and drive."

The passenger side urges motorists to "Buckle up, every trip, every time." In English and Spanish, it warns, "Click it or ticket, day and night." And it tells drivers, "Move over, slow down — it’s the law." Said O’Carroll: "We want drivers to move over when law officers are standing on the white line [so the officers won’t get struck]."

On the rear of the vehicle are these messages: "Don’t text and drive," "One text or call could wreck it all," "Phone in one hand, ticket in the other," "Park the phone before you drive" and (in both Spanish and English) "Stop aggressive driving."

On the hood are the following facts: "One person is killed every 51 minutes by a drunk driver. A texting driver is 23 times more likely to crash. People not wearing a seat belt are 30 times more likely to be ejected from a vehicle during a crash. Three out of four persons ejected in crashes die as a result of their injuries."

The vehicle is also adorned with four QR (Quick Response) codes. When it’s parked, people scanning these codes with their SmartPhones will be directed to various traffic-safety Websites.

"We’re the first police department in the country to have this cruiser," said O’Carroll. "And it’ll be on display at schools and other places throughout the county. We’re excited to bring this to the community. It’ll be available to all officers at all our district stations, SRO [student resource officers] and shopping-center officers. And we’ll get community feedback on how well it’s being received."

He said the police have already increased their DUI-enforcement efforts. And he praised Officer Matt Bell for making 30 alcohol-related arrests last year at night, plus Officer Tonya Trivett, who arrested several impaired drivers during the day. So, said O’Carroll, "It’s a 24-hour/day problem in our community, and all our officers are out there making a difference."

Noting that Sully District Officers Todd Kincaid and Ryan Morgan worked on the messages emblazoned across the new cruiser, O’Carroll said a private/public partnership made the $4,000 wrap possible. Transurban, the Unified Prevention Coalition and the Fairfax County Law Enforcement Foundation all helped with both the design and dollars.

"This public/private partnership highlights how the Police Department, private sector and community come together to increase our culture of safety," said county Police Chief Ed Roessler Jr. "The car’s an educational-awareness item which is more than capable of enforcing the law. But it’s the Police Department’s desire to remind our community members, and those traveling through [this county], that we will not tolerate unsafe driving."

He said behaviors such as texting and driving, not buckling up or being impaired in any way will not be accepted. As it is, said Roessler, "We lose more lives on the roads than we need to every year."

Agreeing, Supervisor Michael R. Frey (R-Sully) said, "The goal is prevention, rather than responding to, a serious accident. This is very creative — an example of thinking outside the box to reach some people we wouldn’t otherwise get that message to. All the officers do a fabulous job and this is one more thing to help."