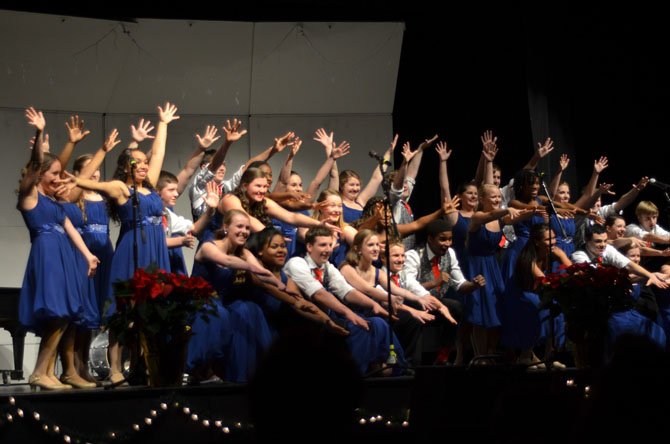 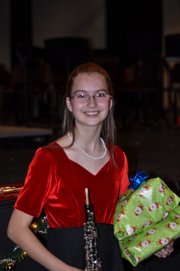 The public had an opportunity to get an earful of both groups musical talent with the annual winter concerts held at the Herndon High auditorium. The Herndon High Choir Winter Concert was on Dec. 16. "It was a fabulous show," said Adrian Morgan, father of Blake Morgan, a member of the Madrigals Singers. "Choral Director Mrs. Van Slyke made a very interesting program with her music selection." Morgan was capturing video footage from the event. "My son realizes that this has been a very good musical education program for him."

The Choir Winter Concert included singing from all the choral Herndon ensembles. The program began with the Vocal Jazz group singing "I Could Write a Book" by Kirby Shaw. The all-female a cappella performance group, The Shebees, sang "Tears in Heaven" and the all-male a cappella performance group, The Bennett Street Boys, gave an enthusiastic rendition of "Please Don’t Stop the Music." The Heat Wave Show Choir did several songs before a brief intermission.

The Madrigals, an advanced mixed choral group then took the stage with songs including "Tomorrow Shall Be My Dancing Day" and "Carol of the Bells." The Herndon Chorale then performed, followed by the Concert Choir and finally the entire Herndon High School Choir Department.

Herndon High School Choral Director Dana Van Slyke directed the show, and at times was joined on the piano by her husband Jim Van Slyke, Herndon High’s vocal jazz clinician. "We are kind of a go get ‘em team," said Jim Van Slyke. Students in all grades at Herndon High have the opportunity to participate in one or more of the musical groups. With the exception of The Bennett Street Boys and the Shebees, the groups study, rehearse, and perform as regular classes for which they receive elective credits.

At several points former Herndon High choir alumnus were welcomed to join in and accompany the singers. "I thought the concert really fit well together, it was fun coming back and seeing everyone and what we left behind," said Kelsey Anies, now a freshman student at Radford University. "I enjoy coming back every year because I am watching my sister progress in the Chorale group," said Kylee Horstman, now a college sophomore at George Mason University.

On Dec. 18, the Herndon High School Band had a concert they dedicated to former Herndon High band directors Gene Duman and Mitchell Bender. After the Herndon High Percussion Ensemble played, a representative from the office of Congressman Gerry Connolly came up and presented a statement recognizing the participation of the Herndon High School Marching Band in the 2013 Pearl Harbor Memorial Parade. There were then performances by the Herndon High Jazz Band, the Symphonic Band, and the Wind Ensemble. "It was a very nice concert, it was a pleasure to see the alumnus return and participate," said parent Judy Vierow. "I think it was really cool when all the alumnus came up," said freshman student and oboist Evelyn Showalter.