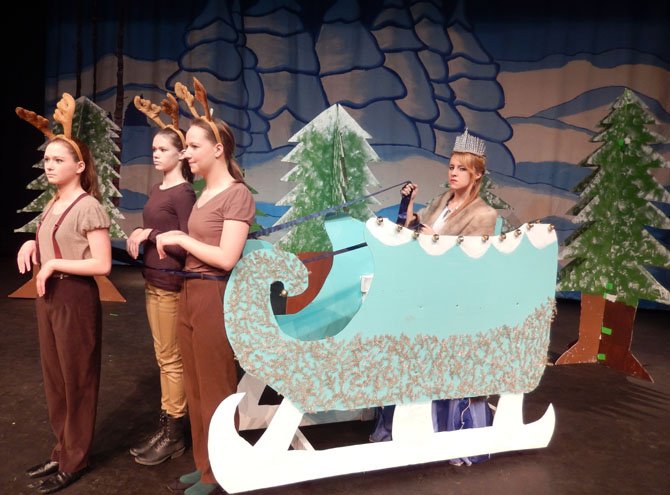 Based on the same Hans Christian Anderson tale as the Disney movie, “Frozen,” Robinson Secondary presents the children’s play, “The Snow Queen.”

“Kids will like the colorful characters and that it’s the children who save the day,” said Director Chip Rome. “And adults and teens will enjoy the wordplay and characterizations. It’s a fun ride.”

Putting it on is the acting and tech class, Robinson Production Co. The cast and crew of 32 began work in September. Students must audition for the company; so besides being highly motivated, said Rome, “They’ve approached this show with extraordinary enthusiasm and dedication. They’re talented, creative and hardworking and it’s paying off.”

When the queen insults a goblin by saying he’s ugly, his revenge is to freeze her heart and she becomes the Snow Queen. Sister and brother Gerta and Kai hear about her from their grandmother; and when Kai vanishes, Gerta learns the Snow Queen stole him, so she goes on a quest to find him.

Along the way, she meets young Prince Eric of Lapland, who agrees to help her, as do a crow named Cawtrina and a witch called the Conjure Woman. But they must battle the Snow Queen’s minions, Blue Norther and Frostbite.

The story unfolds in the grandmother’s house, against a snowy landscape and in the Snow Queen’s palace, and almost everyone in the cast is also working on tech. For example, costume head is Katherine Ide, with help from freshman Olivia Hays who portrays the Snow Queen.

Wearing a fur shawl, an icicle tiara and a shattered-mirror necklace, Hays described her character. “She’s heartbroken because her own son was taken from her and she can’t find him,” said Hays. “So her mirror turns her evil, bitter and heartless. Playing the Snow Queen is a fun contrast because I’m peppy and friendly in real life, so I love taking on a villainous role. I can be larger than life, order people around and speak harshly.”

Calling it “a fun, wintertime-themed show,” Hays said its message is that “love persists through everything, and everyone is your family. Children will love it. They’ll connect with the lovable talking animals Gerta meets on her journey and will love getting to know each one.”

Hays said freshmen are doing the whole show. “It gives us real-world experience of being part of a theater company, not just acting, but also doing sets, makeup and all the artistic elements,” she said. “Everyone gets to show their talents and really shine.”

Playing Gerta – in pigtails, tights, hat and a cape over her dress – is Isabel Min. “Gerta’s sweet and is nice to everyone she meets,” said Min. “She was orphaned, so she wants all the family she can get and is accepting of everyone. She’s caring and brave and loves her brother, and she always looks on the bright side.”

Having such a big part is challenging, said Min, but it’s taught her “more about acting – facial expressions, body movement and reacting to other people. And as Gerta, I meet all these hysterical characters that are fun to be around.” She said the audience will like the moral of how “family always comes through. And the costumes, makeup and lights really help the magic of the story come alive.”

Sam Rudy portrays Prince Eric. “He’s thoughtful and kind, goes out of his way to help others and strives to be the best,” said Rudy. “It’s fun having some scenes that are all about Eric; it’s grand playing a prince because everybody looks up to my character.”

He said children will worry that a main character’s in trouble, but they’ll like seeing that the story Gerta and Kai heard from their grandmother – about a girl trying to save her brother – comes true.

Garrett Christian plays Kai. “He’s a loving brother and a nice guy,” said Christian. “But when he’s under the Snow Queen’s spell, he becomes cold-hearted, hateful and cruel – all the things children shouldn’t be. It’s great playing his two, different personalities and showing the contrast between the evil guy and the normal one.”

Christian said the audience will like the relationships between all the characters and the connections Gerta makes during her adventure. And, he added, “The effort that went into the tech work also makes this show.”

Portraying Cawtrina Crow – complete with huge, black wings and white-and-black feathers – is Maddie Dozier. “Cawtrina is Gerta’s guardian, escorting her through the snowy places,” said Dozier. “Gerta’s safety is her top priority. She’s super sassy and doesn’t let anyone tell her what to do, and she shows her feelings by how she holds her wings.”

Enjoying her role, Dozier said, “Cawtrina has a New York accent and is so much her own person that she doesn’t care what others think about her.” Overall, she said, “The audience will like this show’s magic; it’s family-friendly and really heartwarming.”