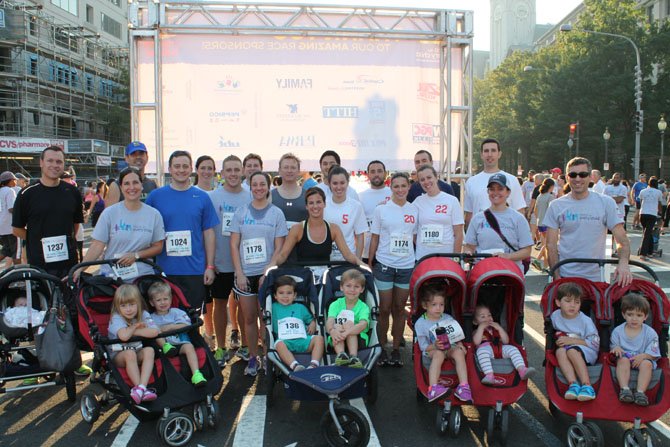 The Maloney family and friends participate in last year’s Race for Every Child to support Children’s National Hospital. Contributed

After raising $712,000 last year, Children’s National Health System has set a goal of raising $1 million through the 2nd annual Race for Every Child in September.

Ashley Husich, the race manager for the event, said that last year, the inaugural year for the race, surpassed expectations with 3,946 participants, and this year they are hoping to have 5,000.

“This (race) was an idea that was talked about for several years,” Husich said. “A lot goes into it and we do a lot of events at our hospital. However, we didn’t really have an event that was low cost and really engaged the entire community. We wanted something that anyone could attend and anyone could afford. We had a great turnout because there were some families who just wanted to give back who could do it for a very low price.”

Husich encourages everyone to get involved, even those who are not runners.

“I believe that most people in this community have been touched by Children’s in someway or another,” Husich said. “We touch so many people in the community so a lot of people have a connection to the cause. In addition to being a race we focus on this being a fun, family friendly day with food trucks, a DJ, music, a whole area to learn about. It’s basically a huge all day kind of event.”

Charlotte Maloney went through cooling therapy as an infant to help reverse brain injuries that she suffered during birth.

Arlington resident Margaret Maloney’s daughter Charlotte was born last July and was not breathing when she was delivered.

“I had a completely normal pregnancy until about seven minutes before she was born,” Margaret Maloney said. “Things started to go awry and when she was born she wasn’t breathing and we honestly didn’t think she was alive. It took a little while to get her breathing.”

Within six hours of being born, Charlotte Maloney was transferred to Children’s National and began hypothermic therapy.

“They lower her body temp to 92 degrees for three days to give the body a break and give her brain a chance to warm the injuries and we were extremely fortunate that it worked for her,” Margaret Maloney said.

Last year’s race took place shortly after Charlotte Maloney received her treatment, so Maloney felt a push to be involved.

“As she started to improve while we were at Children’s we started to notice the flyers and we felt so much gratitude so my husband and I decided to get involved,” Margaret Maloney said. “We had a great team. It’s a really family-friendly event. It’s just a phenomenal organization, the research they do is really impacting lives here in D.C. and throughout the country. It’s just a really well-rounded organization that serves everybody.”

Charlotte Maloney is now a happy and healthy baby after going through cooling therapy to reverse brain injuries.

She said she is excited to be involved again this year and looking forward to raising more money and enjoying the events of the day.

The race is on Saturday, Sept. 13 from 7 a.m.-noon, with events including a 5K run/walk, kids’ dash, and on site vendors and activities. Race registration for the 5K is $35 through Aug. 31 and $45 Sept. 1-10. Kids’ dash registration is $10 but participants are encouraged to fundraise beyond the registration fees.

Husich said that the race offers many incentive prizes for fundraising ranging from water bottles for individuals who raise $100 up to a night’s stay at a hotel and an additional gift for those who raise $10,000. For all the details on registration, fundraising and the event visit raceforeverychild.org. Participants are also encouraged to use the hashtag #RaceforEveryChild when posting on social media about the event.