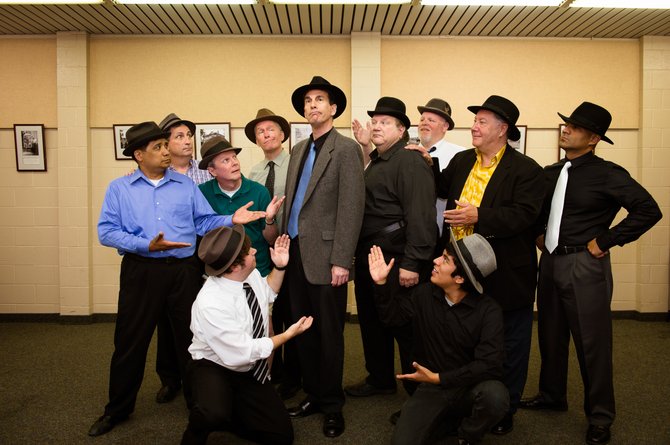 Note: Through a cooperative agreement with The Metropolitan Washington Ear, along with the support of the Alden Theatre, audio description services for individuals with vision challenges will be offered at the July 26 performance.

The energy was high as the cast arrived to begin rehearsals for the McLean Community Players' upcoming production of the musical theater classic, "Guys and Dolls." Soon enough, the hustle and bustle of New York City came into the mind's eye.

Many may know "Guys and Dolls" from its mid-50s movie version with Marlon Brando and Frank Sinatra. Hold on though, the movie was an adaptation of the 1950 Broadway stage musical that ran for 1,200 performances and garnered five Tony Awards. It has music and lyrics by Frank Loesser and a book by Jo Swerling and Abe Burrows. It is based on a story with mythical New York City characters by short story humorist Damon Runyon.

"Guys and Dolls" is full of small-time criminals and petty gamblers. They are out for a fast buck, yet with their big appetite comes a soft spot for love. The "dolls" in their lives are every bit as tough as the "guys." Everyone is reaching for the moon and a better life.

With a score of about 20 memorable songs, including the quickly recognizable "Luck Be a Lady," "Sit Down, You’re Rockin' the Boat", the production is a tuneful night of entertainment. Director Rachelle (Shelly) Horn called the show "the ultimate theater experience for those who know the show well, but also for those who have never seen it.

"It has great music, a great story, many laughs and, a talented and hard-working cast, crew and production staff," said Horn. "The characters are wonderful. They are people with faults, yet are so likeable. They all have caring souls."

Musical theater veteran, Rich Amada plays character Nathan Detroit, "a very flawed character, but with a big heart. A man with a 1000 schemes, none that really work." As Amada got into his character, he was soon using a delightful herky-jerky New York cadence and accent for speaking.

Jocelyn Steiner, of Vienna, is Miss Adelaide, Nathan Detroit's long term fiancé. For Steiner it is clearly a part she relishes. Miss Adelaide "is far from a ditsy character. She is not dumb at all, in fact. She is worldly-wise. She also so many funny lines."

"Guys and Dolls" producer Terry Yates added: "You will be humming when you leave the theater after the show, the songs are so great." So, get ready to have "Guys and Dolls" ring your bell.