‘Guys and Dolls Jr.’ in Alexandria: On Taking Risks
Votes

‘Guys and Dolls Jr.’ in Alexandria: On Taking Risks 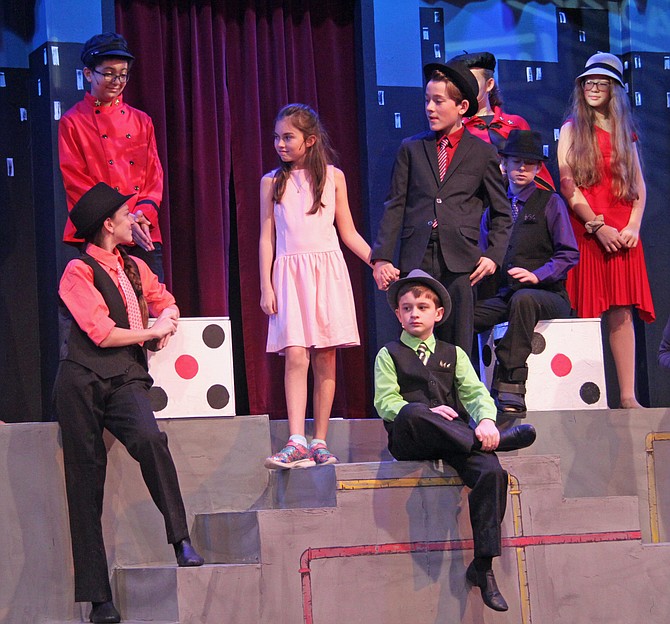 Aldersgate Church Community Theatre (ACCT) is presenting “Guys and Dolls Jr.” from Jan. 18-27. Set in New York City, “Guys and Dolls Jr.” follows gambler Nathan Detroit as he tries to find the cash to set up the biggest crap game in town while the authorities breathe down his neck. Meanwhile, his girlfriend and nightclub performer, Adelaide, laments that they've been engaged for 14 years without getting married. Nathan turns to fellow gambler Sky Masterson for the dough but Sky ends up chasing the straight-laced missionary, Sarah Brown.

Director Emily “EJ” Jonas said she grew up in Alexandria and loved seeing the shows as a child. “I decided to direct this musical because I love the opportunity to work with students of all ages, and I love the risk-taking theme of this musical,” she said.

She said her goal was to bring the risk-taking lifestyle of New York City in the 1920s to the greater Washington, D.C., area. “Many of these classic musicals can be looked at through different eyes and from multiple perspectives. Our production looks at the theme of risk through the eyes of the women. Adelaide and Sarah are committed to their bets. They each take a risk to step forward in their lives and embrace the world they are in. They make a bet and they win,” she said.

Producer Jennifer Saunders said she’s always been passionate about musical theater. “I truly love watching young actors develop their skills and then shine on stage. They are all so talented, brave and fun. A young cast brings so much energy and excitement to the process of putting on a musical. It was especially fun watching them take on a classic like ‘Guys & Dolls!’ It's been a pleasure being a part of the backstage magic that allows young actors to practice their craft and then shine with joy at showtime,” she said.

Brett Medley is playing the role of Sky Masterson, who has the classic confidence from the golden days of Broadway. “His character arc essentially revolves around how he’s changed by Sarah, and furthermore by love. He starts as this respected man at the top of the gambling game and this comes into play in his interactions with other gamblers in the show. As he interacts more with Sarah, we see him come out of his shell and open up more about how he’s feeling, which is something he’s never done before,” he said.

Claire Fuller is playing the role of Benny Southstreet, one of the crap shooters who helps Nathan with his crap game. “She definitely helps him keep his crap game afloat, with the help of Nicely-Nicely Johnson and Rusty Charlie. My character has been helping Nathan with his game for a long time and it has helped her fill her wallet during the Great Depression,” she said.

Ellee St. Pierre plays the General of the Mission. “I don’t believe that Sarah Brown’s mission branch is successful enough to keep open. I’m skeptical of her ability to recruit sinners, and I plan on shutting her branch of mission down if she doesn’t prove that she can bring people in,” she said.

Jefrey Lopez is playing the role of Nicely-Nicely Johnson who is part of a comic-relief trio. “I, along with Benny Southstreet and Rusty Charlie, am there to lighten up the atmosphere and contrast with the seriousness of the Sky and Sarah love-story. Nicely, as I see it, is a condescending, yet well-meaning, know-it-all,” he said.

Mary Margaret Bargery is playing the role of Sarah Brown. “She is organized, proper, caring, and virtuous, but she also struggles with a judgmental mentality towards the 'sinners' she aspires to save. Her rather severe exterior serves as a wall that hides her adorable innocence and potent fear of failure. I interpret that Sarah is struggling with herself and who she is. She suppresses her desire to take a risk and experience more of what life has to offer outside of the mission,” she said.

Sophia Stine is playing the role of Adelaide, a sassy, confident actress. “She is madly in love with Nathan and wants things her way all of the time. She hates the crap game, dreams of getting married, and is constantly getting sick. Achoo!” she said.