‘Thank You to Everyone Who Believed in Me’
Votes

‘Thank You to Everyone Who Believed in Me’ 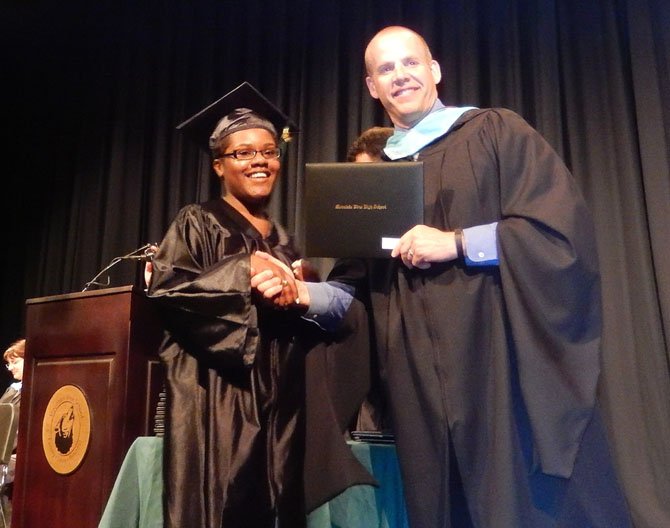 Shawnea Owens gets her diploma from Principal Dave Jagels. Photo by Bonnie Hobbs. 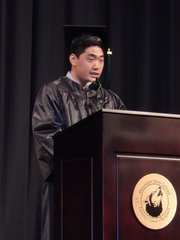 At the start of Mountain View High’s June 17 graduation ceremony at Centreville High, Principal Dave Jagels told his students how honored and privileged he felt “to be the principal of one of the best schools in Fairfax County.”

Congratulating them on their “monumental accomplishment” of graduating, he said, “As I look out at you, I’m in awe of life’s obstacles that some of you overcame to be where you sit today.”

The two student speakers, who shared their stories with the audience, were examples of some of the many obstacles Mountain View’s students had to hurdle to reach graduation. The first to speak was Peter Shin, who initially headed down the wrong path, but was able to turn his life around and even receive a scholarship.

“In 2013, I did a terrible thing and was sent to the JDC [Juvenile Detention Center] on a felony charge,” he said. “I realized I was throwing away my potential and I knew I needed to change. For my sentence, I had to do 100 hours community service and go to school and make progress.”

Shin’s first step was enrolling in Mountain View. “Everyone here treated me well,” he said. “When I didn’t believe in myself, they believed in me. I stopped hanging out with friends who’d get me in trouble, and I stopped worrying about things I couldn’t change.” As a result, his grades improved, his relationships became stronger and he participated in school events.

Now, said Shin, “I want to go to law school and become a defense attorney and help other people because they helped me. My parents and girlfriend supported me and pushed me to do my best. I’ve matured and I’m proud of myself today. Graduating high school has given me confidence, and I’m looking forward to the challenges ahead.”

“Mountain View has been a blessing to me,” he continued. “If I hadn’t come here, I don’t know what I would have done. Thank you to everyone who believed in me and gave me the confidence to believe in myself.”

Meanwhile, Karla Bolanos wasn’t just getting used to a new school, she was adjusting to a whole, new country where the English language was foreign to her. “I left my family in El Salvador and had to get used to a new life, new culture, new language and a new environment,” she said.

She attended a Chantilly school, but it might as well have been on Mars. “My first day of school, I was terrified,” said Bolanos. “I didn’t know any English; I practiced, but couldn’t answer when people just asked me my name. I soon became frustrated and depressed; people talked to me and I couldn’t understand.”

“School was so hard for me,” she continued. “I wanted to communicate with people, but couldn’t, so I was angry at myself for not learning English quickly. I started skipping classes and my counselor said it would take me five or six years to graduate.” But that summer, she heard about Mountain View. Her sister was transferring there and Bolanos decided to join her.

“My mother said Mountain View was where the bad kids went,” she said. “But I came here three years ago and it was the best decision of my life. The teachers gave me extra help and told me to study hard and believe in myself. I made honor roll and read my first book here.”

The ESOL teacher and librarian helped Bolanos improve her English, and she said reading was a big factor in her success at school. “I had to work extra hard,” she said. “But Mountain View gave me hope that I could graduate from high school and be the first person in my family to attend college.”

Referring to the school motto, she said Mountain View gave her “family, love and respect.” Bolanos, an honor graduate and scholarship recipient, then thanked counselor Michael Todd, Assistant Principal Amy Parmentier and all her teachers “who were there to push me whenever I gave up hope. This is not only my victory, this is all of our victories, Timberwolves!”

After those two speeches, Assistant Principal Susan Lee said, “This is what keeps Mountain View teachers coming to school every day. We hear stories like these about students who won’t quit.”

Math teacher Anne Hoffman gave the Citizenship Award to Bolanos. It recognizes students who help build a positive school community, and Hoffman said Bolanos was involved in Mountain View’s reading buddies and environmental programs and praised her tenacity and drive.

Receiving the Personal Achievement Award was Antonio Perez. “He had a past filled with negative choices, anger and poor behavior,” said Math Department Chair Emily Woolard. “But he comes here today as the definition of determination and resilience – and as someone who’s transformed himself into a respectful young man.”

The Faculty Award for achieving academic and personal success, despite significant obstacles, went to Wana Chiwevu. “She’s been an exemplary student – hard-working, independent, kind, funny, disciplined and determined,” said chemistry teacher Ana Rose Tuszka. “She completed 1-1/2 years of classes in one year, attending both day and night classes, and taking public transportation to get there.”

“She read extra books and researched topics at home,” continued Tuszka. “She’s a classroom leader, helping others, and supported women in need through the Brave Girls Club. She’s found a family here at the View, and it’s been a joy and a pleasure watching her relentlessly pursue her education.”

After that, Jagels presented the diplomas and the graduation celebrations began.