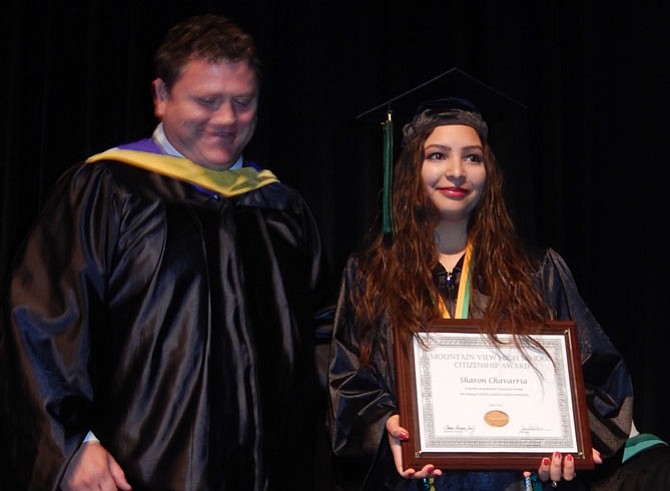 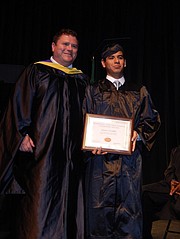 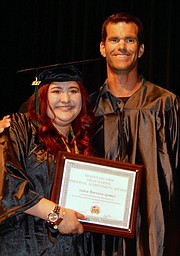 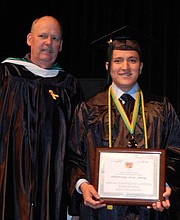 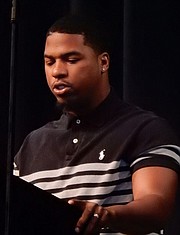 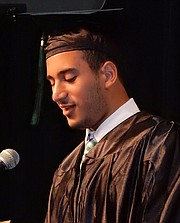 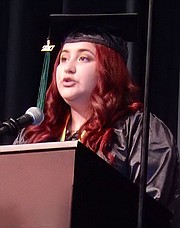 ‘Mountain View Was a Blessing for Me’— Two seniors, one alumnus, share their stories.

The highlight of any Mountain View graduation isn’t watching the seniors receive their diplomas, but listening to the student speakers share their personal stories. And this year’s speakers were no exception.

First up was Marcel Wells, who attended the school when Jim Oliver was principal (2003-10). Current principal, Gary Morris, told the seniors Wells was there to “bridge the gap between where you are today and where you can be.”

When Wells first came to Mountain View, math teacher Anne Hoffman became his mentor. But, he said, “I eventually became complacent, skipped school and my grades slipped. But Ms. Hoffman called me and yelled at me and said, ‘Get your butt to school.’ I’d never heard her raise her voice before, and it was a defining moment for me. A woman I’d only known for a few months cared about me — and it felt like I was surrounded by family, love and respect.”

Later, just the algebra SOL stood between Wells and graduation. He hated math and had previously failed that SOL, so he knew he had to work his hardest to overcome this last hurdle — and he did. Said Wells: “I got one, last chance, and I passed the test.”

Before coming to Mountain View, he said, “I was kicked out of every other school for fighting. But now I’m self-sufficient. I’ve been married for five years, have a 4-year-old son and a 2-year-old daughter, own my own house and car and have a decent job. Thanks, again, and congratulations, graduates.”

The next speaker was senior Jostien Sky, originally from Alexandria, Egypt. “Coming to the U.S., school wasn’t my priority,” he said. “I was at Centreville High, but I skipped school so much that the administrators there said I wasn’t going to graduate — and I didn’t want to let my parents down.”

So he enrolled in Mountain View and found “a great staff and great students who work together to get the job done. The teachers want us to earn our diplomas as much as we do. They make difficult subjects easy to understand. And if I miss a day of class, someone calls me.”

Basically, said Sky, “They care about me, so now I go to school every day. I’ve never seen such strong relationships between students and teachers at any other school. I thank the staff at Mountain View and, especially, Ms. [Ellen] Fay, my counselor. We’ve learned we need skills and knowledge to move forward. And now that we’re graduating, we need to keep moving and keep learning.”

Then senior Saira Gomez came to the podium. “When I came to this country three years ago, I couldn’t see myself someday standing on this stage,” she said. “I was pregnant at 17 with two, beautiful twin daughters. It was a high-risk pregnancy, so I was on bedrest for three months and couldn’t go to school.”

But in December 2016, she returned to classes at Mountain View. “My babies were 5 months old and only 5 pounds each,” she said. “They were born premature, and it was so hard to leave them. But now that I’m here, graduating, I know all the sacrifices were worth it.”

“This is more than a school, said Gomez. “Coming to Mountain View was a blessing for me. It helped me become a better person and a better mom. My personal-finance teacher helped me so much and supported me, even after I finished her class. The staff here has become my family. They, my babies and my family were my motivations to reach my goals and graduate. And I know that someday my children will be proud of me.”

She also thanked her daughters’ father for “being there beside me and being a wonderful father to his little girls.” And she advised her classmates to not be hesitant to “Look for help. There’s always somebody there to help you accomplish your goals. I hope I’ve made my mom proud; thank you.”

Addressing them during their graduation ceremony on Tuesday, June 20, at Centreville High, he said they were about to be set free to make their marks on the world.

“You’ve been on this journey for some time and, today, it’s here,” said Morris. “Go change the world. I’m serious; you can do it. I believe in you; I have faith in you.”

Giving examples of a few people who’ve done it, he mentioned Mahatma Gandhi, who led nonviolent protests for independence in India. He also noted American Civil Rights leader Rosa Parks, who showed that “Ordinary people can do anything if they stick to their beliefs, regardless of the circumstances.” And he praised farmworker and activist Cesar Chavez who inspired people with his motto, “Yes, it can be done.”

So, Morris asked the students, “Why can’t you go change the world? You’ve defied the odds before. Some of you have done it because you’ve believed what your teachers said you could do. You put your head down and forged on until you reached your goals. You didn’t quit; you believed you could because that was the only option.”

Detailing what they’ve changed about themselves, Morris said that, initially, many of them didn’t want to be at school. “But you were hungry for that education and wanted to work toward graduation,” he said. “That’s inspiring — you changed hearts and showed us you were ready for this.”

He said the students also changed their values from wanting to stay home in bed to becoming eager to attend classes. And, he added, “You changed your peers; they wanted to succeed because they saw you succeed — and that’s an impact.”

Furthermore, said Morris, “You’ve made us change the way we deliver education to you — and that’s innovation. Inspiration, impact and innovation — you’ve got to have them to change the world — and you do. We’ve seen what you can do and others have seen it, too.”

Quoting Gandhi’s famous words, “Be the change you wish to see in the world,” Morris told the seniors, “I’ve already seen that capability in you, just by being you. And I and the rest of the faculty will be here to see you through, just the way we always have.”

“Be the best you can be, every single day,” he continued. “You don’t have to be perfect, but aim for it. Follow the motto that’s gotten you here today — [Mountain View’s motto of] ‘Family, love, respect.’ Now, go out and change the world. #GoTimberwolves.”

Then, after a school alumnus and two seniors shared their individual success stories, several students received Mountain View’s highest awards. They were recognized not just for their academic accomplishments, but also for their personal character.

The Citizenship Award is given to those students who have helped build a positive school community through their example and their work with others. Social Studies Department Chair Pete Garvey presented these awards to Junior Zevallos and Sharon Chavarria.

The Personal Achievement Award recognizes those students who’ve succeeded academically and personally, despite adult pressures and obstacles, such as raising a child and holding down a full-time job while attending school. Social Studies teacher Mike Hardy presented this honor to Saira Gomez.

Faculty Award recipients are students who’ve earned the faculty’s respect and admiration by exemplifying the spirit of the school’s motto, “Family, love, respect,” while earning a 3.4 GPA or higher. English teacher Tim Harris gave one of these awards to Misael Maradiaga. Harris said Maradiaga didn’t speak English when he first came to Mountain View, but learned quickly. He also achieved an “A” average in his classes while working full-time.

The other Faculty Award was given to Bailey Kim by social worker Cynthia Crisafulli. “Bailey completed 10 classes this year, earned a 3.8 GPA and is graduating one year early,” said Crisafulli. “She gave birth to her son at age 14 and had to learn to cope with her emotions in more mature ways. She also won three scholarships and plans a career in the sciences.”