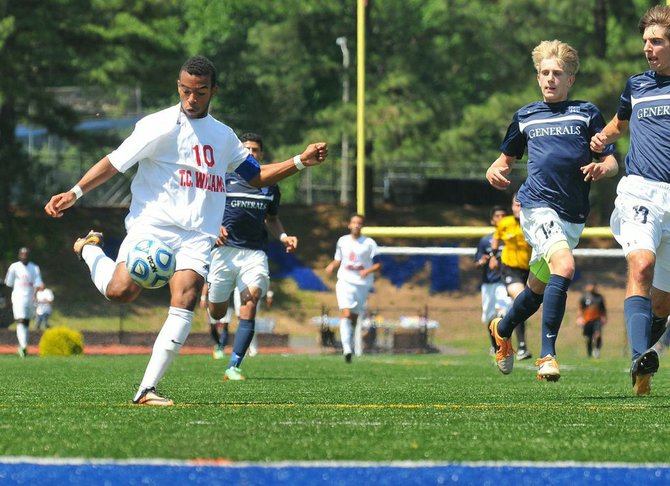 T.C. Williams rising senior Eryk Williamson, left, has followed the action closely during the 2014 World Cup. He is a fan of Brazil, France, and the United States. Photo by Louise Krafft. 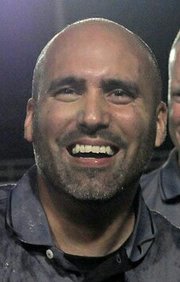 Garza married his wife, Jennifer, on June 21 at the Hendry House at Fort C.F. Smith in Arlington. During that Saturday in Northern Virginia, Garza and a group that included his best man, West Potomac boys’ soccer coach Andrew Peck, watched the Ghana-Germany match in the groom’s suite. Later, when the group was taking pictures, Peck had the match streaming on his cell phone.

What was Jennifer’s reaction?

“She laughed when she found out,” Garza wrote in a twitter message. “She married a soccer coach.”

Garza is among the local residents who have closely followed the 2014 World Cup in Brazil. As the competition nears an end, soccer coaches and players from Northern Virginia and Potomac, Md., shared their memorable experiences from the month-long event, and their predictions on who would emerge victorious from the tournament’s final four teams: Brazil, Germany, Argentina, and the Netherlands.

“This has been,” Churchill girls’ head coach Haroot Hakopian wrote in an email, “the most interesting/exciting cup in years.”

Garza wasn’t the only one making an effort to watch the World Cup. Oakton boys’ coach Todd Spitalny, who owns a kitchen and bath company in Manassas, said he had DirecTV installed in his office specifically to watch the World Cup. South Lakes girls’ coach Mike Astudillo took in some of the action at Reston Town Center, and Lucas Belanger, a 2013 Mount Vernon High School graduate and rising sophomore goalkeeper at American University, watched the United States matches at National Harbor in Washington. T.C. Williams rising senior Eryk Williamson downloaded an app on his phone to receive live updates if he wasn’t able to watch.

“Watching soccer is so important if you want to become a better soccer player,” Gray wrote in an email. “It builds your soccer IQ, creativity and love for the game.”

Along with following the action at home --- and on a cell phone during his wedding day --- Garza, a 1991 Hayfield graduate, has watched the World Cup at the Bungalow and Lucky’s Sports Theatre in Kingstowne.

“The atmosphere has been phenomenal,” Garza wrote, “with so many fans coming out to watch.”

MUCH EXCITEMENT centered around the performance of the United States men’s national team, which competed against Ghana, Portugal, and Germany in Group G, nicknamed the “Group of Death.” The U.S. emerged from group play with a 1-1-1 record, including a 2-1 victory over Ghana on June 16, and advanced by virtue of a goal-differential tiebreaker over Portugal. The United States’ World Cup appearance ended on July 1 with a 2-1 loss to Belgium in extra time in the round of 16.

“Like we all should, I've been supporting the U.S.,” Joe McCreary, a 2014 Yorktown graduate and future James Madison University soccer player wrote in an email. “I think soccer in America the next four years is on the rise after team USA advanced from the group of death.”

“This has been the most interesting/exciting cup in years.”

In four matches, the U.S. produced some memorable --- and forgettable --- moments. Against Ghana, Clint Dempsey scored the United States’ first goal in the opening minute. John Brooks scored the winner in the 86th minute.

In the United States’ second group match, an early defensive miscue led to a 1-0 deficit in the fifth minute against Portugal. The U.S. battled back to take a 2-1 lead, only to allow the tying goal in the final minute of stoppage time.

The USMNT lost to Germany 1-0 in its final group match, but advanced via tiebreaker.

“Sixteen saves in a game is hard to do in high school soccer,” Hakopian wrote. “I have NEVER seen that happen at the professional/World Cup level.”

Garza, who has coached at Robinson for two seasons after spending nine years at Mount Vernon, said while the performance of the USMNT gives fans hope for the future, he wishes the team had taken a more aggressive approach.

“I wish [head coach] Jurgen Klinsmann would have taken a more attacking approach this World Cup,” Garza wrote. “I was a little disappointed that he changed his philosophy after [forward Jozy] Altidore went down [with an injury]. It looked like he had no substitute for him and his decision to sit back a lot was very disappointing --- especially against Belgium when he started with three forwards. He did however, give us hope for 2018.

“One thing I really did enjoy was seeing so many U.S. fans coming together --- letting the world know soccer is here to stay in the U.S.”

“Sixteen saves in a game is hard to do in high school soccer,” Hakopian wrote. “I have never seen that happen at the professional/World Cup level.”

“Honduras is probably one of worst teams in the World Cup, but the fact that they are there means a lot.”

It wasn’t just the USMNT or its players generating interest, however. Along with rooting for the U.S., Hakopian, who was born in Iran, also followed the Iranian team. Iran finished last in Group F with a 0-1-2 record, scoring their lone goal of the World Cup against Bosnia and Herzegovina in a 3-1 loss on June 25.

Hakopian, who has coached at Churchill High School in Potomac, Md., for 12 years, also said he would like to see Argentina star Lionel Messi win a World Cup. He also cheers for the Netherlands, which has been his favorite team since age 7, thanks to their “cool” orange jerseys --- though Hakopian added “[forward Arjen] Robben’s consistent flopping annoys the hell out of me ...”

“I was born in Iran so I am always interested in how they perform, considering their players have difficulty playing outside the Middle East,” Hakopian wrote. “My wife was in the Peace Corps and traveled extensively in South America. Although she spent most of her time in Paraguay, she always roots for Costa Rica and Chile, which has made this year's cup even more fun.” 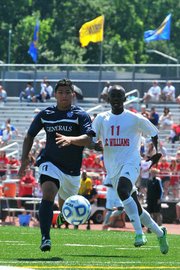 Washington-Lee rising junior Maycol Nunez, left, rooted for Honduras, his native country, along with Belgium and Argentina during the 2014 World Cup.

Washington-Lee rising junior Maycol Nunez scored 37 goals in 2014 and helped the Generals advance to the Group 6A Virginia state final. Nunez lived in Honduras before moving to the United States four years ago at the age of 12. He cheers for his native country during the World Cup, along with Belgium and Argentina.

Honduras finished last in Group E with a 0-3 record, scoring its lone goal in a 2-1 loss to Ecuador on June 20, but that hasn’t stopped Nunez from enjoying the experience.

“Honduras is probably one of worst teams in the World Cup, but the fact that they are there means a lot,” Nunez wrote. “... Honduras [scoring] their first and only goal in the World Cup against Ecuador has been definitely one of my favorite moments in this World Cup so far. ... Words cannot describe what watching Honduras in the World Cup means to me. It's just such an amazing feeling that I can't even describe.”

Astudillo, who has coached the South Lakes girls’ team the last two seasons and used to coach at Chantilly, has extended family from Colombia. Along with cheering for the U.S., Astudillo followed the Colombian team that won Group C with a 3-0 record, and defeated Uruguay 2-0 in the round of 16 before falling to Brazil 2-1 in the quarterfinals.

“Best tournament in our history,” Astudillo wrote. “[I’m] so proud and we have so many young players. Look out Russia 2018!”

Williamson, who led T.C. Williams to the 2014 Group 6A Virginia state championship, said he is a passionate supporter of host Brazil, though he also cheers for the U.S.

“I'm a huge Brazil fan,” Williamson wrote. “I just love the way they play. However, growing up I always used to cheer for France. Now that they've been knocked out, I've been all about Brazil. ... Both of my parents are American so, at heart, I cheer for the U.S.”

Belanger was a goalkeeper on Mount Vernon’s 2013 state championship team. He made a pair of key saves during the Majors’ penalty-kick shootout victory against Cosby in the state final. Belanger said he has enjoyed watching goalkeepers perform during the World Cup.

“I have always been a huge U.S. fan, even though they have been disappointing up until this World Cup, but I’ve also been rooting for a few individual players (mostly goalkeepers) such as Gianluigi Buffon for Italy and Thibaut Courtois for Belgium,” Belanger wrote. “Being a goalkeeper myself, I have learned to appreciate the difficulty [of] some of the saves they make, and I always enjoy watching a goalkeeper have a great game.

“... I always love watching penalty-kick shootouts, but I have enjoyed watching all the games where the goalkeepers performed well, like Costa Rica, Nigeria, and especially the United States.”

THE FIRST SEMIFINAL MATCH, Germany versus Brazil, will be played today. The Netherlands and Argentina will face one another tomorrow. The majority of coaches and players interviewed said Germany would win it all. Williamson said Brazil will have a tough time getting past Germany in the semifinals without star forward Neymar (back injury) and captain Thiago Silva (cards).

Nunez picked Argentina to win “because they have Messi and the other teams don’t.”

Astudillo had far less praise for the Argentine star.

“I know I sound like a hater, but I’m not a Lionel Messi fan,” Astudillo wrote. “I grew up watching Diego Armando Maradona single-handedly carry [Argentina] to a World Cup championship in Mexico in 1986. Teams would triple team him because he had zero help on that squad, but it didn’t matter. He always found a way to make those around him better. If Lio can’t deliver a World Cup to his native Argentina, I think we should hold off on considering him one of the greatest ever.”

The championship match is scheduled for Sunday, July 13, providing the final opportunity for a memorable World Cup viewing experience.

“This World Cup, we saw so many come together --- friends, family, strangers --- all to see the world play,” Garza wrote. “Compared to previous years, this World Cup has been huge. Every U.S. game I have watched with family and friends and fellow coaching colleagues from the high school ranks. Each time, we easily took up quite a few tables, getting to the pubs quite early to secure space.”