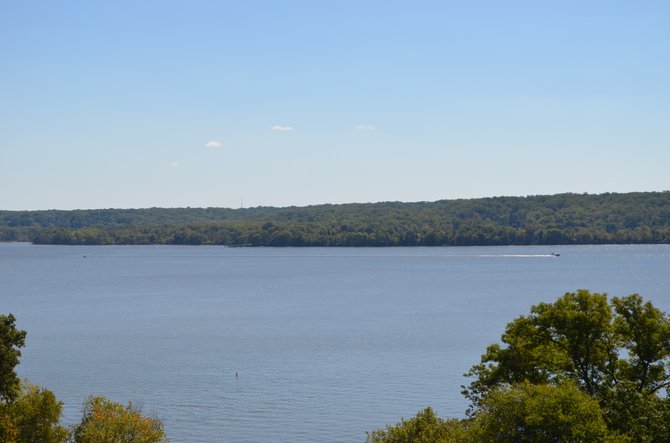 Water temperatures in the Potomac River are warming of .046° C per year due, in part, to the hotter air temperatures. Photo by Lisa Spinelli/The Connection

Drinking cups of clear tap water could be a luxury we are less likely to take for granted in the near future as climate-change culprits affect our waterways—and our water bills.

The increased development of Northern Virginia, along with agricultural uses, have been slowing down the Potomac’s fast-moving water for a number of years; add climate-change factors like rising air and water temperatures and we now have what the Shenandoah Riverkeeper Jeff Kelble calls a “double whammy” on the river.

“Outside of big storms, hot dry summers like we experienced last summer reduce the flow of the Potomac over the falls, reducing its ability to flush pollution from the tidal waters in the area. This is sort of like under-filling a toilet tank before you flush - lots of gunk stays in the bowl,” said Dann Sklarew, associate professor of applied ecology and sustainability in the Department of Environmental Science and Policy at George Mason University who is actively involved in the sustainability of the Potomac.

The Obama Administration’s third National Climate Assessment report confirms earlier reports from the Interstate Commission on the Potomac River Basin that air temperatures in the area have risen about 2 degrees in the last 100 years. If global carbon emissions continue at their current rate, we will see a spread of longer heat waves and a further increase in average air temperatures.

WATER TEMPERATURES in the Potomac River are following suit with an average warming of .046° C per year due, in part, to the hotter air temperatures. By 2040, the Potomac River—which supplies 75 percent of the area’s drinking water—will likely see an increase in surface water temperature of about 2.7° F, but could increase as much as 4.1° F.

“Algae love that gunk—it's what's for breakfast for them—so they tend to flourish in such soupy conditions,” added Sklarew.

The increased temperatures—both in and outside the water—create a changed ecosystem for the Potomac and Occoquan that could force water treatment plants to change their filtration process. Some of these problematic scenarios could include the above stated longer blooming seasons for blue green algae, a decrease—or killing off of—eelgrass, and more runoff from farms and rainwater filled with contaminants and pollutants like manure and fertilizer.

“We just got results back from three weeks of sampling the North Fork, South Fork and Main Stem (three streams that feed the Potomac) and found species of blue green algae known in other places to create algal toxins,” said Kelble last month. Kelble’s group is a branch of the D.C.-based clean-water nonprofit company Potomac Riverkeeper.

Blue green algae or cyanobacteria can release toxins called cyanotoxins which have been known to cause liver tumors, neurological disorders and even death in animals and humans. While many European countries follow the World Health Organization drinking water guideline of 0.001 mg/litre for at least one type of cyanotoxin, the United States has yet to adopt any federal regulations on these toxins.

Fairfax Water’s Chief of Source Water Protection Gregory Prelewicz admits they have no cyanotoxin regulations either.

The algal blooms do occur naturally, but the increase in duration, species and number of algal blooms could create toxins harmful to our health as well as absorb the much-needed oxygen in the water, which affect the odor, clarity and taste of the water.

Still, the people in charge of the drinking water are not overly concerned.

“There are no real alarm bells going off for us,” said Tom Jacobus, general manager of the U.S. Army Corp of Engineer’s Washington Aqueduct. The aqueduct collects, filters and sells the drinking water to D.C. Water who provides Falls Church, Dunn Loring and other parts of Northern Virginia with their drinking water.

And while Fairfax Water, who provides the majority of our drinking water, has a quantity contingency plan by developing the new Vulcan Quarry, they see “nothing [else] on the horizon that has come to our attention that we need to prepare for,” said Tracy Goldberg, manager of planning.

Customers in the future are likely to see higher water bills, Jacobus conceded. The additional costs could be as low as a few dollars, still a few dollars could be problematic for lower-income families who can’t afford even a moderate increase in their bills.

ONE GROUP HELPING educate NoVa residents on water quality and taking action is the Arlington-based nonprofit Arlingtonians for a Clean Environment (ACE). ACE leads monthly river clean-ups to help fish out the bikes, packing peanuts and other random trash thrown into the waterways. The 30-year-old organization also helps educate people on water conservation and how using less means less energy consumption not just for them, but the water treatment plants as well—reducing everyone’s carbon footprint.

“Just installing things like low-flow faucets, we have seen it cut a person’s water bill by 10 to 25 percent,” said Elenor Hodges, Executive Director of ACE.