Archive Provides ‘Insight into the Reality of Segregation’
Votes

Archive Provides ‘Insight into the Reality of Segregation’ 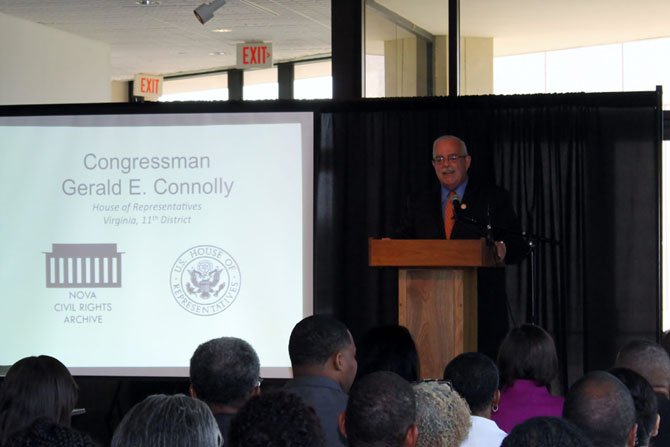 Civil Rights activists Edwin Henderson, Lillie Jessie and Ralph Smith joined numerous other Virginia residents who lived through the Civil Rights movement and provided their stories during a dedication ceremony for the Northern Virginia Civil Rights Archive on July 7.

U.S. Rep. Gerry Connolly (D-11) began the project to collect personal stories of those who fought for equality, in commemoration of the 50th anniversary of the Civil Rights Act.

“The stories collected for this project provide an important insight into the reality of segregation in our own community and the efforts of those who participated in the Civil Rights movement, documenting the activity of those who paved the way for a more civil society,” said Deborah Boehm-Davis, George Mason’s dean of the College of Humanities and Social Sciences.

Connolly reminded attendees that it was because of heroic actions of not only the greats like Martin Luther King Jr., but also of individuals in the community who fought to make a difference.

“I feel so humbled in the face of these stories. It’s a part of our history I want to make sure we don’t lose sight of,” Connolly said.

Lillie Jessie, a participant in the archive testimonials, speaks at the Northern Virginia Civil Rights Archive Dedication Ceremony on July 7.

MORE THAN 50 HOURS of video interviews have been recorded from the year-long project.

“This isn’t that far back in our history. Even today, we face things like voter suppression. We face obstacles to people exercising this sacred franchise that many people fought for and some died for not so long ago in our history. That’s why this project is important to remember. It’s very important to learn from our past. It’s very important to continue to fight the good fight to make sure equality is not an aspiration, but a reality in America,” Connolly said.

Marion Dobbins, the project’s coordinator and a doctoral student at George Mason, said if it were not for the determination of Civil Rights activists, she would not be standing before the audience today.

“To all those who participated, without you, there is no archive. Without you, we could not collect that history,” Dobbins said.

Dobbins, a sixth-generation Fairfax County resident, called the video and written testimonies a treasure. “Each interviewee brought to life their own story, whether they were educators, protestors or every day working folks. They each had a story to tell,” Dobbins said.

Northern Virginia was a battleground for civil rights, said archive participant Edwin Henderson. Other officials echoed this sentiment and thanked the participants for sharing their stories.

“It allows us to document the lives of everyday ordinary citizens, people whose stories are otherwise overlooked by history, and to preserve those stories for generations to come,” said Debra Lattanzi Shutika, English Department chair at George Mason University.

Henderson, an 11th-generation Virginian, talked about the legacy of his grandfather, who along with Joseph Tinner founded a chapter of the NAACP in Tinner Hill, located in Falls Church. Henderson also founded the Tinner Hill Heritage Foundation to preserve the civil rights history of Falls Church.

“I know this is going to be a very valuable asset at the Library of Congress and other places,” Henderson said.

Lillie Jessie, a school board member in Prince William County and a civil rights activist, reminded everyone to listen to the stories of those around them.

“We all want to matter to someone and to leave a mark. It is said your story is the greatest legacy you will leave your friends. Many of us really do die with the music still in us,” Jessie said. “I lost a sister yesterday. She died with some of the story still inside of her.”

Jessie also shared that her twin sister, due to medical problems, is unable to share some of her stories from the Civil Rights era.

“Maybe I should have listened more. I would say to everyone here, listen more,” Jessie said.

OTHER ARCHIVE PARTICIPANTS who were in attendance at the event included Fannie Fitzgerald, part of the “Courageous Four” who integrated Prince William County Schools, and Ralph Smith, a freedom rider and leader in the NAACP.

“There’s no checks and balances on the Supreme Court. They aren’t supposed to be lawmakers,” he said.

The archives are available for viewing at George Mason University, the Library of Congress, Fairfax County and Prince William public libraries, and Connolly’s website.