Transitway to the Future
Votes

Transitway to the Future 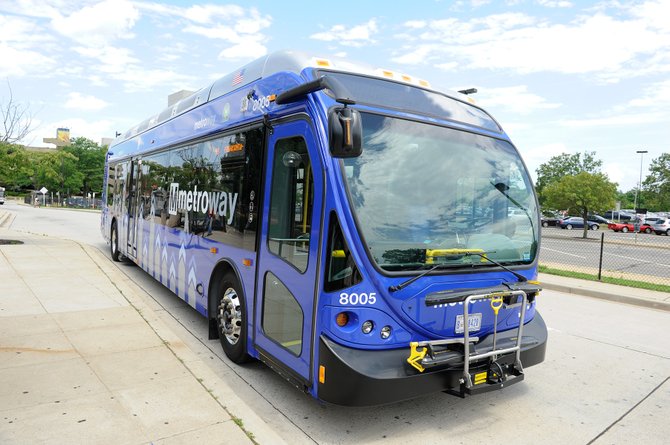 The Metroway buses will have a different branding than the Metro buses that are already commonplace in the region. 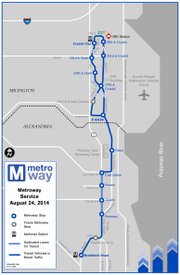 What Is a Transitway?

Transportation officials in Alexandria and Arlington describe the Cystal City Potomac Yard Transitway as the wave of the future, a new way to commute that will allow riders to bypass the congestion that plagues drivers in the region. Because about 20 percent of the transitway has dedicated lanes, passengers will be able to zip along one of the most congested parts of Route 1. The other sections of the transitway will have traffic signals that give the Metroway buses priority. Planners say the experience of buying a fare and boarding will look and feel much more like riding the Metro than riding a bus.

This week, elected leaders and government officials from Alexandria and Arlington will turn swords into plowshares, setting aside their previous differences about the Crystal City Potomac Yard transitway and wielding ceremonial shovels to break ground. Transportation leaders say the sleek blue Metroway buses represent a bold step forward for Northern Virginia and the commonwealth. When the Alexandria part of the transitway opens next month, it will have the first dedicated lanes in the metropolitan region. That will set the stage for the next generation of transportation planners to follow, the first of which will be the Arlington portion of the transitway, which is set to open in the spring of 2015.

"This is significant because it's the beginning of a coordinated multimodal plan," said Virginia Transportation Secretary Aubrey Layne, who toured the construction site last month. "This is the beginning, and hopefully it will show this is the next step in our integrated process."

Two years ago, the two neighboring jurisdictions were at odds as they were moving in different directions on how to plan for the transitway. Alexandria leaders complained during a public session that Arlington had backed out of a study that might have led to federal funds for the project. Arlington leaders responded that they didn't back out of the study because they had always considered it optional. Even now, as elected officials plan to bury the hatched and come together, some differences linger. Arlington plans to upgrade the transitway to a streetcar in 2020 while Alexandria leaders say they won't even consider a streetcar until 2021.

"Right now, there is a mismatch in planning and state of direction," acknowledged Alexandria Councilman Justin Wilson. "At some point, we'll reconcile all that."

THE TRANSITWAY will begin at Pentagon City Metro station and end at Braddock Road Metro station, a 4.5 mile stretch that includes some of the most congested roads in the region. The blue Metroway buses will be operated by the Washington Metropolitan Area Transit Authority, although they will have different branding than the standard Metro buses. Transportation officials say the bus-rapid transit vehicles will feature offboard fare collection and multiple points of access. On weekdays, they'll arrive every 12 minutes from 5:30 a.m. until 10 p.m. On weekends, they'll have 20 minute headways.

"Because it's in dedicated lanes, and typically those lanes are concrete, the suspension on these vehicles is tighter," said Rich Baier, director of the Alexandria Department of Transportation and Environmental Services. "It's a smoother ride."

"I toured the site in the last month or so with Alexandria officials, and they haven't exactly picked where it's going to be," said Layne. "It looks as if this is a good beginning, and we'll see how this all goes through there."

"Let's see how BRT works along the Route 1 corridor rather than make a commitment now to convert to streetcar," said County Board member John Vihstadt, a critic of the Columbia Pike streetcar. "I think the streetcar will be totally unnecessary here because the BRT transitway will be a great success."

But supporters of the streetcar say the approaches are not inconsistent at all because the circumstances are so different. Columbia Pike is already a fixed width, and so dedicating lanes would be impossible. But because Potomac Yard is essentially a blank slate from a planning perspective, which allows for dedicated lanes — a key feature of most bus-rapid transit lines. By the time the Arlington portion of the transitway opens in spring 2015, about half of the total transitway route is expected to have some kind of bus-only lanes.