Alexandria and Arlington at odds Over Streetcars Versus Bus-Rapid Transit

Transit riders could have to get off the Arlington streetcar to board an Alexandria bus. 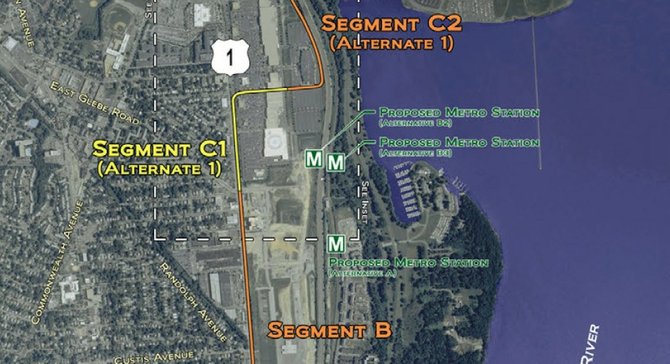 Arlington and Alexandria planning officials are moving in different directions along Route One. While Arlington has already dedicated funds to upgrading the transit corridor to streetcars in the next five years, Alexandria officials say they want to hold off and stay with the bus-rapid transit system slated to open next year.

When the five-mile stretch of the transit corridor opens in late 2013, riders will be able to shuttle between Pentagon City through Crystal City into Potomac Yard and ultimately stop at the Braddock Road Metro station. The route will include several stretches of dedicated lanes, where the transit vehicles will not have to share the road with regular traffic - a first for Northern Virginia. The launch will be a system known as bus-rapid transit, essentially using buses instead of railcars.

The real problem is down the line.

Five years from now, Arlington plans to upgrade to streetcars. The effort is part of an aggressive campaign to launch a streetcar system that would eventually connect to the Columbia Pike streetcar system. The Arlington County Board has already included funding in a long-range capital improvement plan to upgrade. Alexandria leaders, on the other hand, say streetcars are too expensive - at least for now. That means that the two sister jurisdictions are headed for a conflict. One day soon, transit riders arriving at Potomac Yard might have to get off the Arlington streetcar and on an Alexandria bus.

DURING HER CAMPAIGN in the special election to replace former Arlington County Board member Barbara Favola, who was elected to the Virginia state Senate in November, Garvey said Arlington should do a better job communicating and collaborating with other jurisdictions. In an interview on her first day on the job at the Arlington County government center, Garvey said that finding a resolution to the debate on streetcars versus buses could be a good place to start. Alexandria City Councilman Rob Krupicka, a former political rival in a heated Democratic primary last year, agrees with his former opponent that the two jurisdictions need to have a better game plan.

“We've come to the conclusion that rail is something to consider in the future,” said Krupicka. “But it is not something that is financially viable right now in the short term.”

Capital costs for streetcars are two to three times more expensive, although operating costs are less because streetcars last longer than buses. That means that if it wants to upgrade the transit corridor to streetcars in the near future, Alexandria would need to make a major investment - one city leaders are hesitant to do because the city is responsible for raising $240 million to build the Metro station at Potomac Yard. City leaders are currently examining three different locations for a potential location for the Metro station, which would be located on the Crystal City Potomac Yard transit corridor.

Currently, no federal funds are available to help pay for Alexandria to fund the Metro station. So the city plans to creates a special district where tax increment financing will help pay for the Metro station. And property owners will pay a tax rate that's 20 cents higher than the rest of the city, which will also help fund the station. Developers are expected to pay for about one third of the station. Arlington is using a similar strategy to fund the streetcar system.

“Potomac Yard will be a major work center, and you basically need your regional heavy rail system to be able to pull people from all over the region to be able to access Potomac Yard. The streetcar system is a subregional system,” said Deputy City Manager Mark Jinks.

On the ground at the border between Arlington and Alexandria, opinions are divided about the new transit corridor. Some say it would be a mistake for Arlington to have one mode of transportation while Alexandria has another. Others say it really wouldn't matter all that much because commuters could simply move from one to another. On her way to the grocery store, Arlington resident Lili Shelton stops for a moment to consider the county's plans.

"Many years ago when I was in France, we had streetcars. They were wonderful, but they had the track,” said Shelton. “I like the aesthetic of Crystal City.”

VISITING POTOMAC YARD today is a tale of two jurisdictions. The Arlington side has massive new high-density development and mixed-use buildings with ground-level retail and underground parking. Across the boundary, Alexandria has a large surface parking lot attached to a strip mall slated for redevelopment. It's essentially a blank canvas for the Potomac Yard of the future - one that many people say should include a streetcar.

“Alexandria always has extra money,” said Alexandria resident Rebecca White while she was walking her dog on a recent morning. “We are one of the richest cities with all of our taxes. So I don't see why it should be a problem.”

In a joint statement issued this week, Alexandria City Manager Rashad Young and Arlington County Manager Barbara Donnellan said that the two neighboring jurisdictions have been working in a partnership on the transit corridor that dates back at least a decade and are currently engaged I a joint study.

“The Route 1 Corridor is a vital business district for both Arlington and Alexandria,” the two chief executives wrote in the statement, “and we are committed to working together and fostering initiatives for the benefit our communities, as well as the entire region.”