Celebrating the ‘Best of Braddock’
Votes

Celebrating the ‘Best of Braddock’ 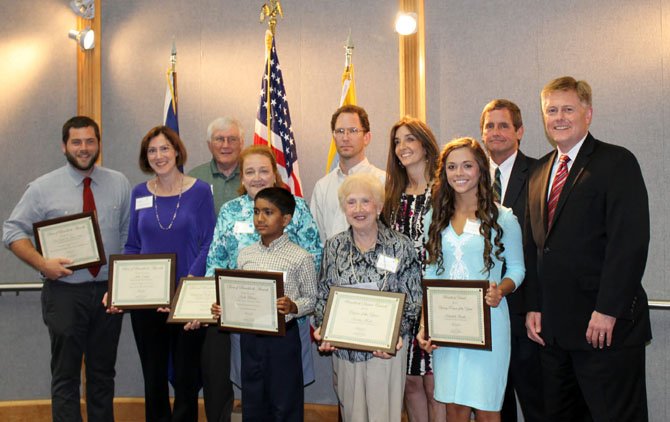 From 10-year-old Rohil Bhinge, who helped raise funds to complete a handicap accessible playground, to Norma Heck, who was one of the first five homeowners of North Springfield in 1955, the Braddock District is full of exceptional citizens.

“It’s our people that make Fairfax County great,” Cook said. “Our community wouldn’t be the place it is without folks stepping up.”

The annual awards honor those who contribute their service and skills in the Braddock District. Award winners included students, community organizations and homeowners who are working to make life better in the area.

“We’re fortunate in Fairfax County. Not everywhere in the country, state or even Northern Virginia has the culture of volunteering like we do in Fairfax County,” Cook said. “It really makes Fairfax stand out.”

"The awards are a great opportunity to celebrate the phenomenal work done by citizens of the district," Cook said. "Their efforts and dedication have helped our community thrive, and we cannot let that go unrecognized."

Rep. Gerry Connolly (D-11) and Del. Eileen Filler-Corn (D-41) also spoke at the awards ceremony, and thanked the awardees for their service.

“I honestly think local government is the most important and noble form of government, because it’s the most successful,” Connolly said. “In Fairfax, we have a really effective government. It really does work. There’s a reason we were voted a few years ago the best managed county in the state.”

Rohil Bhinge, a student at Mosby Woods Elementary School, received the Special Recognition Award for his work to raise funds for Chessie’s Big Backyard at the Lee District Park.

Paula and David McKinley of Olde Forge/Surrey Square received the award for Neighborhood Enhancement or Beautification by a Homeowner.

The award for Neighborhood Enhancement or Beautification by a Community went to Greg Sykes of Kings Park West. Braddock District Young Person of the Year went to Elizabeth Banks, and the award for Club or Organization Making a Difference in the Braddock District went to the David R. Pinn Center.

“I love the involvement of the community in Fairfax County,” said Julie Tahan, park supervisor at Lake Accotink Park who won the award for Most Can-Do Public Employee in Braddock District.

The awardees expressed their thanks and appreciation for living in the Braddock District.

“I’ve loved every minute of living in this community,” said Norma Heck, who won the award of Braddock District Citizen of the Year.