Setting Example of ‘Giving Back’
Votes

Setting Example of ‘Giving Back’ 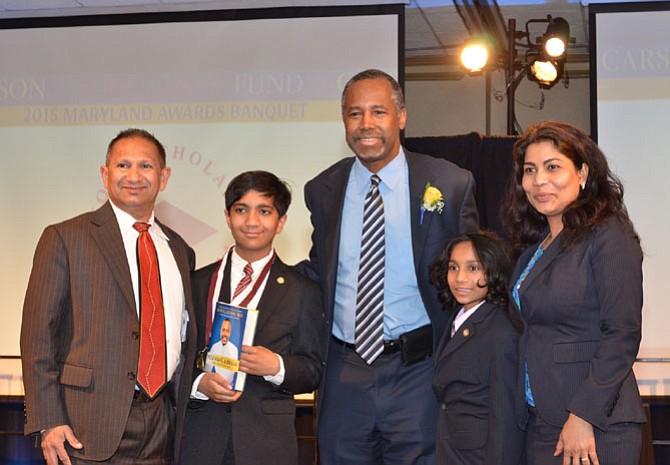 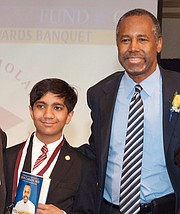 Rohil Bhinge of Fairfax, sixth grader at Nysmith School in Herndon is the youngest recipient in Virginia of the 2015 Carson Scholar award of $1,000. Dr. Ben Carson is an American author and retired neurosurgeon. He is the first surgeon to successfully separate conjoined twins at the head. Carson is running for the 2016 Presidential election.

The Carson Scholars founded by Carson and Mrs. Candy Carson, supports two main initiatives: Carson Scholarships and the Ben Carson Reading Project. The scholarship program awarded students who have embraced high levels of academic excellence and community service with $1,000 college scholarships at a banquet reception in Baltimore in April 2015.

Rohil was awarded the scholarship on the basis of Mr. Ken Nysmith, principal and teacher recommendations, exceeding the scholarship's GPA criteria, and an essay on, "the best gift he received in his life." Rohil wrote about the 100,000 word gift which he received from his grandfather, 60-year-old handwritten journals of quotations. Rohil is 11 years old and currently attends the Nysmith School in Herndon. He excels in school and has been involved in community service projects since he was 9. He was awarded the title of Lord Fairfax in 2014 by Chairman Sharon Bulova for his fundraising efforts for a fully accessible park in Lee District called Chessie’s BIG Backyard. Rohil is an active runner and has, with the help of his family and friends, collected more than $4,500 for the Fairfax County Park Foundation in fundraising by organizing three annual fun runs. Rohil, with his mother’s help, created and founded www.fairfaxfunrun.com fun run signup.

Rohil has been awarded the student Honoree award for the Best of Braddock award by Supervisor John Cook (R-Braddock District) and Elly Doyle award for volunteering at Fairfax County Parks. He has also organized food drives in his neighborhood during the last three Halloweens by distributing flyers for a campaign called, Hunger is Scary. Rohil has also been awarded the Gold Level Presidential Volunteer Service award for 100+ hours of volunteering in school and neighborhood. Rohil has been accepted through Nysmith school into the National Junior Honor Society.

He hopes to inspire young people to volunteer and get involved in community service projects as a way to give back to the community. The past three years have been a big learning experience for Rohil and his family where he has learned about Fairfax Park Foundation's role in raising private funds that supplement tax dollars to meet the community's needs for park land, facilities and services. He has learned that food donations help a number of families in Fairfax County and there are many ways children and their families can volunteer and give back to the community they live in.