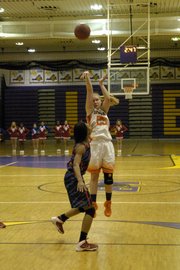 Amy Berglund surpassed the 1,000-point milestone during her four-year career at West Springfield.

Amy Berglund was a four-year standout sharpshooter for one of the top high school girls’ basketball programs in Virginia.

During her senior campaign, Berglund surpassed the 1,000-point milestone for her career and eventually finished second on the program’s all-time scoring list with 1,460 points. In a game at West Potomac, Berglund made 13 of 14 field-goal attempts for a career-high 30 points. The Spartans beat T.C. Williams to win the Conference 7 championship and advanced to the state tournament with a region runner-up finish.

Berglund, a 2014 West Springfield graduate, will continue her basketball career at the University of Northwestern-St. Paul. Berglund recently participated in a Q&A via email with The Connection.

*Connection: What made University of Northwestern-St. Paul the right fit for you?

Berglund: All my family lives in Minnesota so I will be extremely close to them, the strong academics that also integrate faith/Christianity into the learning and the experience, and I loved the basketball program there with an amazing group of girls and coach. My parents approved since they got married at the chapel on campus.

*Connection: What will your major be? What position will you play?

Berglund: I plan on majoring in kinesiology with a minor in biblical studies and possibly business. I will be playing the 2/3 guard.

*Connection: At what age did you start playing basketball? When did you realize playing college basketball was a possibility for you?

Berglund: I started playing around with basketball at age 6, following in the footsteps of two older brothers who played. Ever since I can remember, I dreamed of playing college basketball, but my ninth-grade year was when I realized it was something I could really accomplish.

*Connection: Did you play any other sports at West Springfield?

Berglund: I played lacrosse my senior year and it was an awesome experience with great coaches and teammates!

*Connection: What is your favorite memory of playing high school basketball?

Berglund: Meeting and competing with my best friends. Also, winning the Patriot Conference my senior year, because no one would have picked us to win it at the start of the season. Our team was so close off the court that we all played with amazing chemistry on the court.

*Connection: If you could change one thing about your high school athletic career, what would it be?

Berglund: The only thing I would change is that it could have gone by slower because it was the best part of my high school experience and I already miss being a Lady Spartan.

*Connection: What kind of traits, physical or mental, does it take to be a good perimeter shooter?

Berglund: Physically, I think a good shooter needs to have running endurance and a lot of leg strength so by the end of the game they have enough left in them to get a good jump for the shot. Mentally, a good shooter needs to have the confidence to keep shooting even if the shots aren’t going in at first and the focus to keep making shots when they are hot during a game.

*Connection: Did you have to put in a lot of work to become a good perimeter shooter, or did it come naturally?

Berglund: It did take a lot of work and hours of repetition to become a good shooter but it is what I love doing so I did not mind. I was lucky to have parents who would spend hours standing under a hoop rebounding for me.

*Connection: What is your personal best for consecutive 3-pointers made?

Berglund: I recently made 31 3-pointers in a row when I was practicing with the goal to make a lot of them in a row.

*Connection: What is your career high for points in a game at any age?

Berglund: My career high for points in high school was 30 which came during my senior season. I ended up shooting 13-14 that game and I missed my last shot which, ironically, was the easiest shot of the game, a layup.

Berglund: Tim McGraw, because I love his voice and he has so many great songs.

*Connection: What is your favorite movie? Why?

Berglund: ‘Miracle on Ice,’ because it is the greatest sports movie ever and so inspirational.

*Connection: What is your favorite food?

*Connection: What is your favorite hobby outside of basketball?

*Connection: What location is the farthest you have traveled from the Washington, D.C. metro area?

Berglund: The farthest I have been from D.C. was during a trip to Colorado.

*Connection: Are you a pro sports fan? If so, who are your favorite teams?