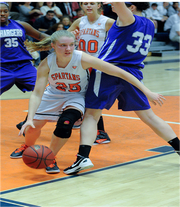 West Springfield guard Amy Berglund looked up in the stands and saw her mom holding up two fingers.

The Spartans were hosting Madison on Dec. 7 and Berglund was closing in on 1,000 career points. Betsy Berglund signaled to her daughter, letting the Spartan senior know she needed two more points to reach the milestone.

With about a minute remaining in the fourth quarter, Berglund dropped in a reverse layup, giving her 21 points for the game and 1,000 for her career. Along with the personal achievement, Berglund helped the West Springfield girls’ basketball team beat Madison, 63-50.

“It was really special scoring my 1,000th point because it was a culmination of so much time and effort that I have put into basketball,” Berglund wrote in an email. “It was especially great reaching that mark in a tough game against a strong Madison team.”

Berglund is a four-year varsity starter for the Spartans. She’s been part of two Patriot District championship teams, one Northern Region championship team and twice experienced the state tournament, including a trip to the semifinals as a freshman. She was a first-team all-region selection as a junior.

“It became my goal to score a 1,000 points after my freshman year,” Berglund wrote, “because I had scored almost 300 that year and I realized it was definitely a reachable goal.”

Berglund is averaging 18.4 points through West Springfield’s first five games this season. The Spartans are off to a 5-0 start, including a 54-53 victory over T.C. Williams on Dec. 13, during which Berglund scored 11 points. T.C. Williams won the Patriot District title last season, snapping West Springfield’s streak of three consecutive district championships.

“The T.C. game was such an intense game and it was an amazing team win,” Berglund wrote. “We were super excited to get the win over the tough opponent that T.C. is. It is a positive step toward our team goal of winning the district title. I think that our team still has many things to improve on and we know that every opponent is going to put up a tough fight so we focus on one game at a time.”

Berglund has narrowed her college choices to a pair of Division III schools: Grove City College in Grove City, Pa., and the University of Northwestern St. Paul in Minnesota.

West Springfield will travel to face Herndon at 7:30 p.m. tonight.