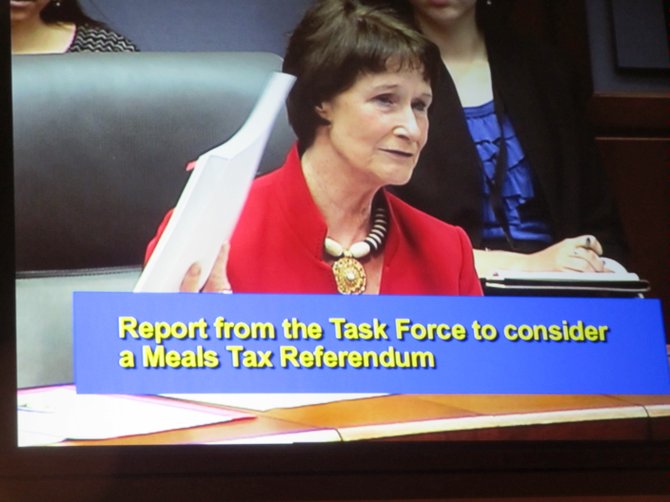 Sharon Bulova, Chairman of the Fairfax County Board of Supervisors, holds up the 170-page final report of the Meals Referendum Task Force. The board deferred any action in order to review the final report in more depth, Bulova said. Photo by Victoria Ross.

About a Meals Tax

What effect would the meals tax have on an average resident at a 4 percent tax rate?

Who would pay the meals tax?

What about tourists? How much do tourists spend on dining out in Fairfax County?

Who else has a meals tax in Northern Virginia, and how much revenue does it raise?

After hours of simmering debate, the Meals Tax Referendum Task Force’s presentation to the Fairfax County Board of Supervisors Tuesday was a mere amuse-bouche, whetting the appetite of board the for the group’s 170-page multi-course written report.

For the past two months, top chefs Kate Hanley (D) and Tom Davis (R), both former chairmen of the board, led a 44-member task force through four highly-charged and heated meetings.

But the group failed to come to a consensus about whether the supervisors should serve up a referendum to voters on the meals tax; instead it provided the board with an exhaustive menu of pros and cons for the supervisors to consider.

Commissioned by Chairman Sharon Bulova (D-At-Large), the task force was convened in April to consider whether Fairfax County should proceed with a referendum for a meals tax; if yes, what year should the referendum be held, and how should the revenue from the meals tax be used.

THE LAST TIME Fairfax County asked voters to approve a tax on restaurant meals, in 1992, the issue ignited a firestorm of protests, and threatened to melt down several political careers.

Probably no local politician was more affected by the issue than Davis, the former Republican congressman who chaired the board during the last 1992 meals tax battle.

“It got pretty ugly,” he said of the factions in the 1992 referendum crusade. The measure was defeated 58 percent to 42 percent with approximately 102,000 votes cast during a special April election.

During Tuesday’s presentation, Davis and Hanley noted the task force learned from the 1992 referendum failure, and came to a swift consensus on two points:

Bulova has said that a four-percent tax on meals and beverages at the county’s nearly 3,000 restaurants would generate approximately $90 million in new revenue for schools, public safety, parks, libraries and human services.

After the short presentation by Hanley and Davis, Bulova made it clear to that she would “not entertain motions” on the report during Tuesday’s meeting.

“The board just received the report, and we need time to digest it,” she said, opening up the issue for brief comments and questions from the board.

“Is it persuasive to voters, in your opinion, that we are not treated as cities in our ability to raise revenue?’” asked Supervisor Gerald Hyland (D-Mount Vernon). “Do you think we should raise the issue that this tax will get us away from the reliance of real estate tax? Will that be persuasive to voters?”

Hanley and Davis said the task force did not provide advice on how to sell the tax to voters.

Supervisor Cathy Hudgins (D-Hunter Mill) said she was concerned about the “enormous lack of information regarding what our constituents know about (our taxing authority).”

“Our legislative agenda has always been that we need the authority to tax in this situation. And that piece is not often discussed,” Hudgins said.

Counties in Virginia are historically restricted in their authority to levy many local taxes, including a meals tax, without a referendum. Cities and towns, on the other hand, are given more leeway by the Virginia state code.

That’s something that won’t happen in Fairfax County, said Supervisor Pat Herrity (R-Springfield), who declared Tuesday there would be no “unanimous” decision when the Fairfax County board casts its vote on a meals tax referendum.

“It’s a tax that targets a single industry,” Herrity said in explaining why he would not consider voting to put a referendum on the ballot. “It would increase the tax on prepared foods by 67 percent, and Fairfax County residents will overwhelmingly shoulder this burden, the same county residents that have seen their homeowner taxes rise by 14 percent in the last three years alone.”

Across the state, a meals tax has met with mixed reaction from voters. Loudoun and Prince William county officials recently rejected the idea of a meals tax after restaurant groups successfully argued the tax would unfairly target an industry that is facing pressure to increase the minimum wage while still struggling to recover from the 2008 recession.

But voters in Henrico County, which surrounds the City of Richmond, narrowly approved a 4 percent meals tax last November.

Political analysis’s concluded the success of that referendum was due, in large part, to an avid public awareness campaign that reminded voters funds generated from the tax — about $18 million each year — were dedicated to Henrico County Public Schools.

While much has changed in Fairfax County since 1992, the mere mention of a meals tax still stirs up vehement reactions.

“I think it is a bit disingenuous to suggest libraries, schools and parks would be the primary beneficiaries of meals tax revenues,” said Herndon resident Walter Hadlock in an email regarding the tax. “There are those of us, i.e., retirees, people with no children at home ... who don’t get any direct benefit from the bulk of county services .…”

“The board has once again put off making a decision on whether to place this burden on our residents, caterers, grocery stores, and restaurants,” Herrity said.

ON THE OTHER SIDE of the debate, Josh Israel of Fairfax said that, although he has no children, he would be “absolutely fine with paying more to make sure that our county has even better schools, sufficient funds for infrastructure, and is able to offer more programs to make our county a better place for everyone to live.”

Therese and Bernard Martin of Reston agreed with Israel.

“Fairfax County has tried, without success, to find sources other than the property tax to pay for schools, public safety and other services desired by its citizens,” the couple wrote in a June 6 email to the task force.

“I bet that the long lines of people waiting to get into restaurants at places like the Reston Town Center won’t be tempted to get back in their cars and drive to Loudoun or Prince William County to save 4 cents on every dollar that they spend. I think the restaurant industry is ‘crying wolf,” Therese Martin said.

After the report by Hanley and Davis, Bulova thanked the task force but did not say when the board would vote on the report.

“What's missing (in the report) is how we discuss this with the community,” added Hudgins.

“This is still in our lap and we have to decide what we want to do with it.”

To view the report, visit www.fairfaxcounty.gov/mealstax/