Tax could generate $88 million in revenue. 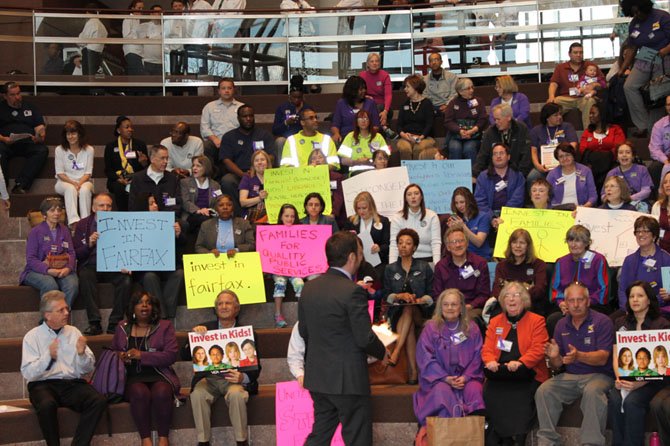 At the public hearings on the Fairfax County budget, several citizens urged the Board of Supervisors to consider a meals tax in order to continue to “Invest in Fairfax.” Photo by Janelle Germanos.

At a public hearing on the 2015 budget, Fairfax County resident Kimberly Adams joined numerous other individuals who urged the Board of Supervisors to consider a meals tax.

“To have the quality of life that we’ve come to depend on in Fairfax County, we must move the needle closer to the regional average when it comes to taxes. We must not be afraid to look for new streams of revenue, such as a meals tax for instance,” Adams told the Board of Supervisors at the budget hearings. “Never have I actually thought, well, there’s a meals tax in Alexandria, so I’ll drive 10 more minutes into Fairfax and order my pizza. I go to the place that’s convenient and where I want to eat.”

Echoing the concerns of citizens like Adams, Board of Supervisors Chairman Sharon Bulova announced the establishment of the meals tax referendum task force on April 22, which will study this possible source of revenue and make a recommendation to the Board of Supervisors by June 17.

“Throughout the past months as this board and the community have deliberated on the advertised fiscal year 2015 budget, a number of individuals and organizations have urged us to put the question of a meals tax to the voters,” Bulova said at the meeting.

Kate Hanley and Tom Davis, former chairmen of the Board of Supervisors, will lead the task force in deciding whether a referendum for a meals tax should occur, and when this referendum would appear on the ballot.

Fairfax County Board of Supervisors Chairman Sharon Bulova announced on April 22 the creation of a meals tax referendum task force.

IN VIRGINIA, counties are only able to establish a meals tax with a voter referendum.

At a rate of 4 percent, a meals tax could generate at least $88 million. Many cities within and around Fairfax County have a meals tax.

“Several of our surrounding jurisdictions have a meals tax, but the Town of Clifton, Prince William and Loudoun counties do not. I have and will continue to be adamantly opposed to a meals tax and any referendum on this issue as it is directed at a single industry. I believe this is the wrong time to add another tax on our county residents and while some of it will be paid by visitors the bulk will be paid by our county residents,” Springfield District Supervisor Pat Herrity wrote in an email on April 30.

In April 1992, voters struck down a meals tax proposal that appeared on the ballot in Fairfax County.

“There has been a growing sentiment during recent years for our board to once again allow the voters to decide whether or not they wish to avail themselves of this additional source of revenue. Reasons for urging this include the desire to diversify the revenues we have available to fund schools, public safety, parks, libraries and human services,” Bulova said.

Mount Vernon District Supervisor Gerry Hyland, who has proposed a meal tax several times in the past, said that voters need to be better informed this time as to why they should vote for the tax.

“To be quite frank, the last time we put it to referendum, there was almost silence on the side of why we were asking people to do it. Most important, the questions should be what are we going to do with the money if it passes and we have a meals tax,” Hyland said.

Adams, who is president of the Fairfax Education Association and part of the new “Invest in Fairfax” coalition, said at the budget hearings that the extra revenue is needed for Fairfax County services that citizens depend on.

AT A RECENT Mount Vernon-Lee Chamber of Commerce event, Lee District Supervisor Jeffrey McKay told members that Fairfax County needs to diversify its revenue and that there was pressure from school advocates to consider a meals tax.

“Will it pass if it’s put on the ballot? I don’t know. I think it’s unlikely, to tell you the truth,” McKay said at the event.

The meals tax referendum task force includes a coalition of organizations within the county, including the Mount Vernon-Lee Chamber of Commerce, the Fairfax Education Association, the Fairfax County Taxpayers Alliance, and the Federation of Citizens Associations.