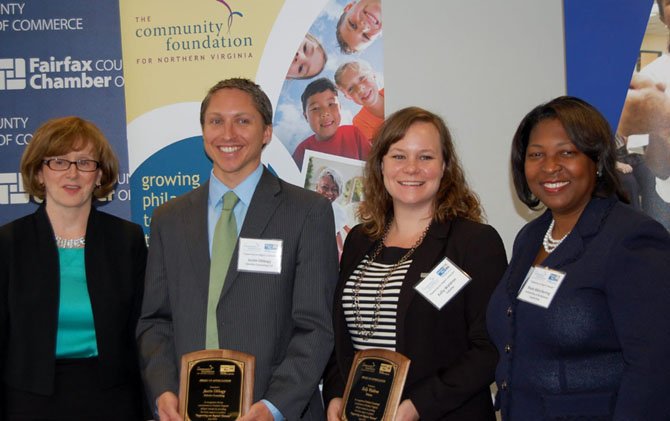 Eileen Ellsworth, president of the Community Foundation of Northern Virginia, Justin Obbagy and Kelly Waldron of Deloitte, and Rosie Allen-Herring of United Way pose after presenting “Supporting our Region’s Veterans,” a report looking at the needs of veterans in the area. Photo by Janelle Germanos.

Although veterans in Northern Virginia are more educated than those nationwide and are less likely to live below the poverty line and be unemployed, a new report has found that individual anecdotes from veterans in the area demonstrate that there are still areas that need improvement.

The report, released by the Community Foundation of Northern Virginia, along with the United Way of the National Capital Area and Deloitte Consulting, found that some veterans face challenges navigating the services available to them.

According to the report, while findings at the macro-level show veterans in Northern Virginia doing much better than those nationwide, there are still issues at the micro-level that need to be improved.

At an event presenting the report on June 13, Justin Obbagy of Deloitte Consulting said that many veterans face a stigma with facing care. The complicated system of services can often be confusing for veterans as well.

“The complex array of services can be difficult to navigate,” he said.

The report cites access, cultural competency, and stigma as barriers to existing services.

Northern Virginia, especially the city of Alexandria and Prince William and Fairfax counties, have a higher concentration of female veterans than found nationwide. Veterans in the region are also mostly white, more educated and less likely to live in poverty.

From 2012 to 2013, the report states, homelessness among veterans decreased by 16 percent in Virginia. The report cites a 2010 Virginia Tech survey that says veterans and providers found the high living cost in Northern Virginia can make it difficult for veterans to find housing.

The population of veterans in the region is expected to grow in the next couple of years, Obbagy said.

Post-traumatic Stress Disorder continues to be an issue, as data has found that PTSD and traumatic brain disorder is more common among veterans of post 9-11 conflicts.

“Northern Virginia is home to one of the most densely populated veteran communities in America. We are investing in an initiative that supports veterans and their families in a very direct way,” said Eileen Ellsworth, president of the Community Foundation. “By partnering with government and nonprofit organizations and collaborating with funders in the region, we are fostering relationships amongst service providers and helping veterans navigate the rich support services available to them in Northern Virginia.”