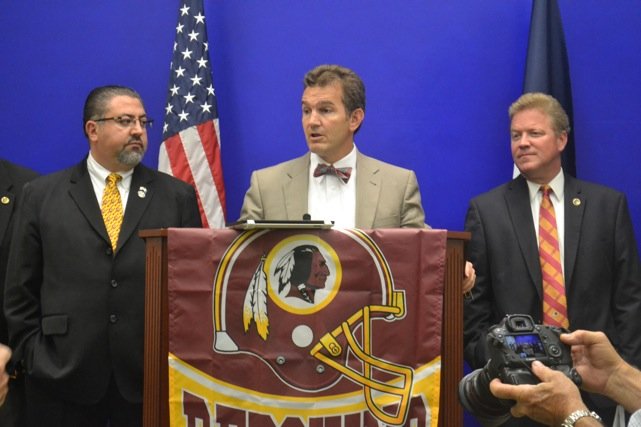 In the first day, the following members announced they were joining the Redskins Pride Caucus:

A lifelong Redskins fan, Fairfax state Sen. Chap Petersen (D-34) has had it up to here with all the talk about the need to change the name of his beloved football team.

He vented his frustration and indignation on his blog — Ox Road South — but said he was leery of tackling what he deemed the forces of political correctness in the "War Against the Redskins" until June 18, when the Federal Patent Office blocked the team’s Redskins trademarks, declaring that the name was "disparaging" to Native Americans at the time the trademarks were registered — as far back as 1967.

That action pushed Petersen off the sidelines to lead an offensive attack.

After the news conference in Richmond the same day, Petersen became the popular pick for making the case on news shows and sports talk shows. The story was picked up by dozens of newspapers — including USA Today and The Boston Globe — sparking heated debates by people posting on media websites.

"I wanted to speak for fans who say ‘You know what? Enough is enough,’" Petersen said in an interview Tuesday. "(Who) has the back of a few thousand loyal Redskins fans who never did anything wrong, except to love a football franchise that united this town in way nobody did before?"

The Redskins Pride Caucus had scored, giving a voice to Redskins fans of all stripes.

"I don’t get the controversy," said Daniel Flores, a 47-year-old Redskins fan from Burke. "The name was chosen to represent the bravery and fierce fighting abilities of Native Americans. It’s a respectful name, not insulting."

"The government has no place in forcing [franchise owner Dan] Snyder’s hand," said Stephanie Sullenger of Vienna. "The issue should be left to the franchise and the fans themselves as no one but Snyder can seem to get Snyder to act. But in the end, shouldn’t there be a separation between Sport and State?"

One of the caucus’ stated goals is to prevent the U.S. Congress from forcing a name change upon the NFL team.

In the past six months, pressure to change the name has been mounting.

In May, 50 senators — half of the U.S. Senate — sent a letter to the NFL urging the team to change its name. Several Native American groups have declared their opposition to the name. During the NBA finals a few weeks ago, the Yocha Dehe Wintun National paid for an ad that highlighted the history of Native Americans, and took a parting shot at the Redskins.

"Look, if I felt like this was an honest complaint, I would pull it back. But I see so much misinformation about this issue," Petersen said, adding that many Native Americans call themselves "redskins," and that the name "Oklahoma" is based on "Choctaw Indian words which translate as "red people."

"This is truly political correctness on steroids," Miller said at the news conference.

The Redskins public relations team also attended the news conference, but released a statement asserting that neither the franchise nor Snyder was behind the formation of the caucus in any way.

Snyder has been stalwart in his defense of the name. In a letter he sent to season ticket holders last October, he cited the association of the name Redskins with the team's long NFL history and its symbolic importance to himself and fans.

DURING THE NEWS CONFERENCE, Lucas — whose nephew is Redskins player DeAngelo Hall — said "none of us feel there is any racism and we love the name," Lucas said.

Petersen said he wants people to know that the caucus is not the KKK. "We’re not just a bunch of insensitive old white guys," Petersen said, "People who know me may say I’m a boring old white guy … Seriously, I am here because I believe in the Redskins, and the name was intended to honor American Indians".

Petersen said the response to the caucus has been overwhelming, and overwhelmingly positive. "I am appreciative of all the comments I’ve received — even negative ones."

But one letter from Karen Fettig of McLean, "really struck me as important, and perhaps offering a solution to the endless ranting. I asked her for permission to print it on my blog, and she said yes."

"Chap: I happened to catch your bit on the news last night re: The Redskins name. I could not agree with your more. You may recall that I have a good bit of Native blood in me. It infuriates me to see all these ‘white people’ telling me that I should be offended by the name. It’s quite the opposite. Even before I moved to this area, I was a Redskins fan because of their name. It is a very proud heritage. Not one member of my family is offended either. The bottom line is that 90 percent of true Native Americans are not offended in the least. The answer is simple: take a poll of only Native Americans. Whatever that poll says should be the answer. End of story."