Promises of a Blue Virginia: ‘A House for all Virginians’
Votes

Promises of a Blue Virginia: ‘A House for all Virginians’ 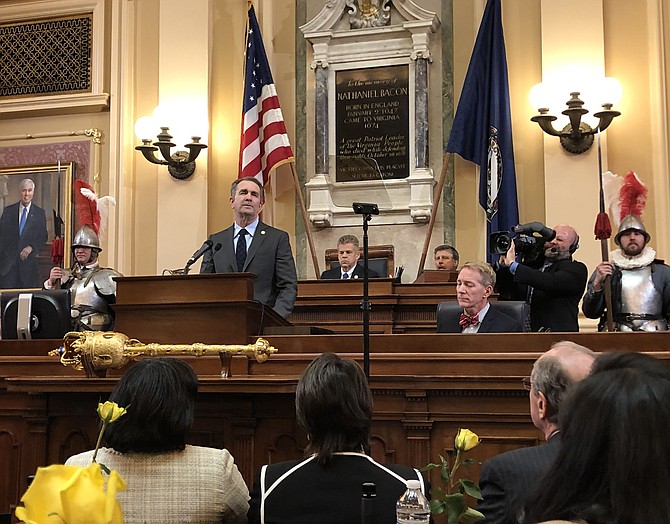 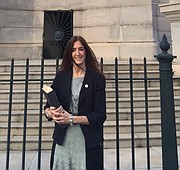 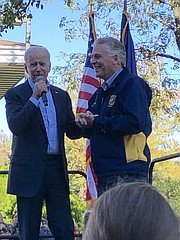 Joe Biden, former U.S. Vice President and candidate for President, at Democratic campaign kickoff in Northern Virginia with former Virginia Governor Terry McAuliffe the weekend before the 2019 Election on Nov. 5. 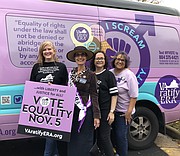 On the evening of Nov. 5, 2019, voters in Virginia paved the way for a historic legislative shift from red to blue in January 2020 when the Virginia General Assembly convenes. Democrats had turned the tables resulting in Democratic State House and Democratic State Senate whirlwinds as members selected their leaders, sensitive to culture, gender and geographic diversity in Virginia. Democrats have pre-filed priority bills and a resolution for the January Session, to create an early voting system, universal background checks/gun safety, housing nondiscrimination for LGBTQ+ and ratification for the Equal Rights Amendment. They pledged to work on current critical needs in education, transportation and economic equality issues.

“We will be walking our own new path moving forward, of (a) Virginia that represents & listens to all people no matter what they look like, the color of their skin, the language they speak at home, the religion they practice or not, or who they love," tweeted House Speaker-designee Eileen Filler-Corn (D-41).

All 40 seats in the Virginia State Senate and all 100 seats in the Virginia House of Delegates had been up for grabs in the 161st Virginia General Assembly and Virginia Democrats picked up four House District seats, 40 (in Fairfax County), 76, 83 and 94 defeating the four Republican incumbents. Democrats won two other House seats, 28 and 91 in open races. They also picked up two State Senate seats, 10 and 13.

The Democrats would have full control of the state legislature when the Virginia General Assembly session convened on Jan. 8, 2020. All three arms of the state's government would be theirs. With the newfound power of a blue-controlled lower chamber of the Virginia Assembly alongside the Virginia State Senate coupled with a blue Governor's mansion, Democrats could pass their agenda Republicans blocked for years including gun safety, higher minimum wage and ratification of the Equal Right Amendment.

This also allows Democrats to wrest back control of the redistricting process after the 2020 Census, the shifting and drawing of the new maps for congressional and state legislative districts.

The day after the election, with the new Democratic power base on the horizon in the state legislature, Governor Northam (D) told CNN's John Berman on "New Day" he planned to reintroduce a slate of "common-sense pieces of legislation" for gun control. "Getting rid of bump stocks, high volume magazines, red flag laws (extreme risk protective orders). I will reintroduce those in January, and I'm convinced with the majority now in the House and the Senate, they will become law. And because of that, Virginia will be safer… Another issue that is very important is women's reproductive health care and stopping the discrimination against the LGBTQ community," Governor Northam said.

Later that day, Governor Northam met with his cabinet and reporters. "Virginia is blue, and I want everyone to know that," he said. Northam stated he wanted to bring back eight bills in January, including decriminalizing marijuana, increasing support for early childhood education, more training for high schoolers to enter the workforce, and reducing the recidivism rate. In addition, Northam said he hoped the Equal Rights Amendment would be brought to a floor vote and thought progress could be made with raising the minimum wage.

On Saturday, Nov. 9, the new House Democratic Majority Leadership announced the election of Del. Eileen Filler-Corn (D-41) as Speaker-designee. The full House of Delegates would officially vote to confirm the new Speaker the first day of the 2020 legislative session. The House also announced Del. Charniele Herring (D-46) as Majority Leader. She became the first woman and the first African American to serve as Majority Leader. And they elected Del. Rip Sullivan (D-48) as Caucus Chair.

"Not only did Virginia just elect the most diverse House of Delegates in its 400-year history, but House Democrats have made history again by nominating a diverse leadership slate to truly represent Virginia," said House Democratic Caucus Executive Director Trevor Southerland. "Finally, we will be able to move forward with a House for All Virginians."

"We are a unified caucus with the shared priority to move our Commonwealth forward, address our most critical challenges, and ensure transparency for all Virginians," said Speaker-designee Filler-Corn. "We are stepping up to lead and understand the value of making our schools better, our communities stronger, our economy fairer, and our Commonwealth the envy of all the states. The firsts are not lost on me – the first woman and the first Jewish person elected Speaker designee in our 400-year legislative history. …We have the most diverse House Caucus in our history, which includes cultural, gender and geographic diversity. It also means diversity of experience and perspectives on issues that affect Virginians in all regions. Our work will not be easy, but I am prepared and eager to serve the people of the Great Commonwealth of Virginia alongside Majority Leader-elect Herring, Democratic Caucus Chair-Elect Sullivan and all of our colleagues," Filler-Corn said.

Del. Mark Levine (D-45) posted, "This is the most diverse caucus that there has ever been in the General Assembly's 400-year history. No General Assembly majority has ever looked more like the people of Virginia than the current House Democratic majority."

As the days after the election rolled forward, on Nov. 14, the blue wave surged. Speaker-designee Filler-Corn announced her transition team, 18 key advisors, to assist as she transitioned into the office of Speaker of the House of Delegates. She selected Wayne Turnage as Chair and Suzette Denslow as Transition Staff Director. She chose other members for her team, including Walter Tejada, a member of the Metropolitan Washington Airports Authority Board of Directors and Ilryong Moon of Fairfax, the first Asian American elected to a public office in Virginia. “People across the Commonwealth told us they wanted to move our Commonwealth forward, address our most critical challenges and ensure transparency for all Virginians," posted Filler-Corn. "I am truly honored to have guidance from these leaders from across Virginia to develop leadership to make our schools better, our communities stronger and our economy more fair."

Shortly after midnight on Monday, Nov. 18, Democratic lawmakers began to file bills minutes into the opening date of pre-filing for the 2020 General Assembly session. State Sen. Jennifer L. McClellan (D-9) submitted her first legislation moments after filing season opened at midnight, putting passage of the ERA at the symbolic head of the list for that chamber.

The weekend after the filing, Democratic Caucus Chair Rip Sullivan (D-48) shared his thoughts on party’s intention for the first three House Bills and resolution, "We tried to send a signal of our highest priorities, in terms of the top," he said.

On Nov. 20, VA Senate Democrats elected leadership ahead of the 2020 legislative session.

From the Senate Democratic Caucus:

With the appointment of State Senator Janet Howell (D- Fairfax) as incoming Chairwoman of the Senate Finance Committee and Del. Luke Torian (D-Prince William) as chair of the House Appropriations Committee, the state’s purse strings and its power rested in Northern Virginia.

“It's hard to understate how unprecedented the 2019 results are for the General Assembly and the Commonwealth. This could be the first time in modern history, really, when we will have a lawmaking majority that holds basic progressive values like fairness, inclusion, equity and the pursuit of justice for all. We will also have the most diverse General Assembly in Virginia's history.

For the new majority as a whole, I think ratifying the ERA, strengthening voting rights, raising the minimum wage, preventing gun violence, and fair redistricting are at the top of the list. I hope to also move the conversation around affordable and available housing, workers' rights and the legalization of marijuana, including expungement of records.

As a medical professional, reining in the cost of healthcare and improving public health more broadly are my top priorities. I've already introduced legislation this month that is aimed at improving maternal health and mental health. I have more legislation on the way that will work to make affordable, quality health insurance a possibility for uninsured and underinsured Virginians. I'm also planning to help address the outrageous price of prescription drugs. If these ideas get a fair hearing, and the overwhelming evidence around why the healthcare system is so expensive is heard, I think these bills will be able to move through the General Assembly.” 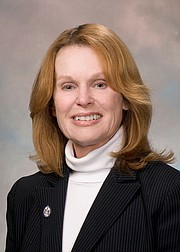 We Democrats have been fighting for a long time to pass gun violence prevention legislation, important changes to the justice system, fund our schools so that every child in k-12 can learn to their potential, as well as grant in-state tuition to all students graduating from our high schools, and pass the ERA. An unprecedented number of women have been elected to our General Assembly--this will bring a new perspective to our work.

Our Caucus is in agreement on these priorities, and of course, each legislator has legislation important to her district. 2020 will be our opportunity to finally create a fair redistricting system in our Commonwealth.

Since my bill mandating that all incarcerated women receive menstrual products at no cost and upon request passed the Public Safety Committee unanimously and also passed both the Senate and the HOD unanimously in the 2019 session, I will continue to work to legislate Dignity for Incarcerated Women.

2020 will be an exciting year for Virginia. I am honored to be a part of this historic biennium. 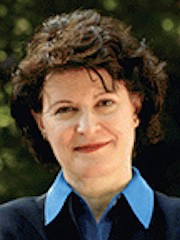 “The Democratic majorities will honor Virginia's history as a forebearer to the Bill of Rights and a state that included an equality amendment in its own constitution by ratifying the ERA. This will be a momentous occasion. Gun safety measures such as universal background checks and red-flag bills will pass, a women's constitutional right to privacy as defined in Roe v Wade will be protected, and important criminal justice reform measures will pass.

I will be submitting legislation to require paid sick days. Too many families are struggling because they cannot care for themselves or their sick children. I will also be submitting legislation to protect a patient from high medical care bills if he/she received emergency care from out-of-network providers. In collaboration with the Zero Carbon Virginia group, I will be implementing important actions to address climate change. Voters spoke very strongly in 2019 about the need for a new direction in the criminal justice system. One piece of legislation that I have continually sponsored is the expungement of non-violent felony convictions from the records of juveniles. I am confident that this legislation will now pass.

It is noteworthy that the composition of the General Assembly more closely reflects the diversity of our great state, and women are taking their place in the power structure.