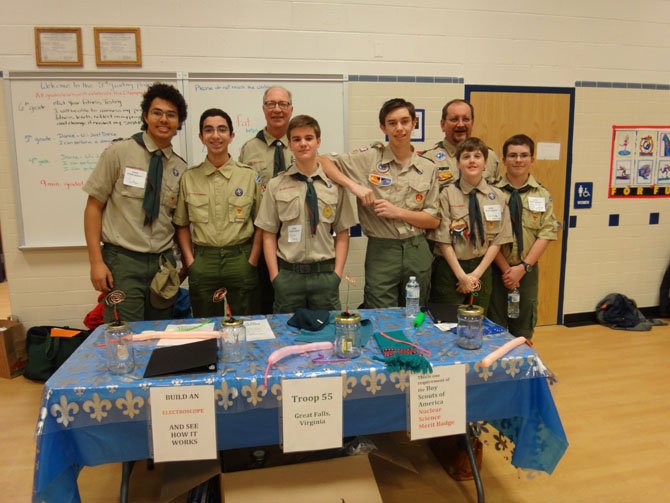 On Feb. 3, Boy Scouts from Troop 55 assisted Great Falls Elementary by setting up a booth at their STEM Fair. The booth demonstrated how to build and use a homemade electroscope. Using copper wire, a glass jar and aluminum foil, Troop 55 Boy Scouts constructed the electroscope, and then helped participants generate static electricity using balloons rubbed on hair, scarves and vinyl notebooks.

The electroscope is an early scientific instrument that is used to detect the presence and magnitude of electric charge. It was invented by British physician William Gilbert around the year 1600.

Students attending the STEM Fair were impressed at how effectively the homemade electroscope measured the electrical charge generated by the balloons.

The process of building and demonstrating the electroscope fulfilled one requirement for the Nuclear Science Merit Badge for the Boy Scouts who attended. As Nick Hodge stated, “This was a really good experience for us. We could contribute to the community and also get a requirement for our merit badge!”