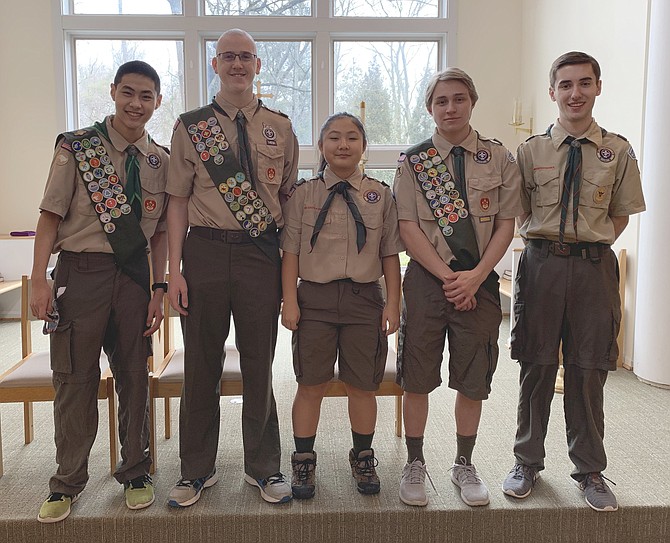 Troop 55 Scouts on the stairs they built at Christ the King Church.

Troop 55 recently welcomed Nathaniel Hauda, Nicholas Hodge and Nathaniel Raudenbush into their Eagle Scout ranks. The three seniors were recognized at a Court of Honor at St. Francis Episcopal Church. Reverend Lucey welcomed guests and commended the newest Eagle Scouts for their perseverance and leadership in achieving Scouting’s highest honor. Frank Smith, who recently retired from Boy Scouts after 70 years of service to Scouting, represented the Powhatan District to officially open the ceremony.

Collectively these Eagle Scouts have camped hundreds of nights, have served in many leadership roles within Troop 55, have completed hundreds of hours of community service and have mentored dozens of younger Scouts. Together they have earned nearly 100 merit badges. They have attended many high adventure excursions including Philmont (backpacking in New Mexico), the marksman program at the Boy Scout Summit in West Virginia, Northern Tier (canoeing through the boundary waters in Canada) and Sea Base (sailing and camping in the Florida Keys). All three Scouts credit their outstanding leadership and public speaking skills to the experiences they gained through their journey to Eagle Scout with Boy Scout Troop 55.