Warhawks have won two of the last three state titles. 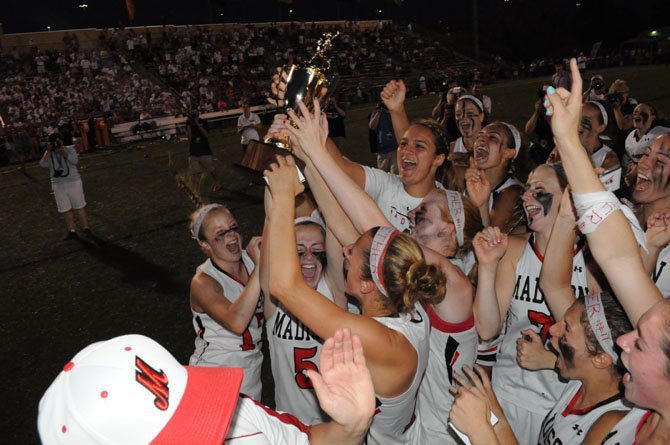 How does a team remain motivated when it has already reached the top?

For members of the defending-state-champion Madison girls’ lacrosse team, motivation comes from a personal desire to maintain an elite level of performance. For head coach Amanda Counts, having a team of self-starters is probably her best chance to avoid succumbing to the pressure of expectations.

Of the 25 athletes on the Madison roster, 21 received playing time last season, during which the Warhawks compiled a 20-1 record and won the AAA state title. Madison returns standouts Katie Kerrigan, Alex Condon and Kierra Sweeney, among others. Four Warhawk seniors have experienced winning two state championships, including the 2011 title during their freshman seasons.

The pieces are in place for another run at state title.

“There’s a little pressure on my shoulders,” Counts said. “It’s my fault if we’re not successful this year because [the players have] proven they know what they’re doing, so I’ve got to pull it all together. I’m feeling that a little bit, but I’m going to try to fake it so I can hide that from them as long as possible.”

What are Counts’ expectations?

“I never want to move my expectations backwards,” she said, “so we’ll start from where we left off last year.”

Counts and the Warhawks have good reason to aim high.

“There’s a little pressure on my shoulders. It’s my fault if we’re not successful this year because [the players have] proven they know what they’re doing, so I’ve got to pull it all together. I’m feeling that a little bit, but I’m going to try to fake it so I can hide that from them as long as possible.”

Kerrigan, who signed with Ohio State, was one of the Warhawks’ top point-scorers last season.

“She can get through situations that don’t make sense,” Counts said. “She has an uncoachable approach to offense. She can find holes where holes don’t exist. She’s so persistent; she makes things happen that I wouldn’t put another player in a position to do the same thing and expect it to work out the way it does for Katie.”

“I think that’s what motivates us in general: by winning those two state championships,” she said. “After those two great seasons, we don’t want anything less than that.”

Counts said she expects midfielders Renshaw and Roberts to have increased roles this season.

“I’ve been super impressed with [Roberts],” Counts said. “… [S]ince the day that she walked onto this team she has been just an absolute workhorse. She challenges herself more than I could if I tried. … [Renshaw] always did her job, but now she’s going to push that a little bit more from what I’ve seen so far.”

MADISON WILL HOST Dominion for its season opener at 7:30 p.m. on Wednesday, March 19. The Warhawks will host Langley on April 10 in a rematch of last year’s state championship game, won by Madison, 12-7. Madison went 4-0 against Langley last season, beating the Saxons in the regular season and the Liberty District, Northern Region and state championship games.

Madison enters the 2014 season with a bull’s eye on its back, but Sweeney said the Warhawks have to stay focused on themselves.