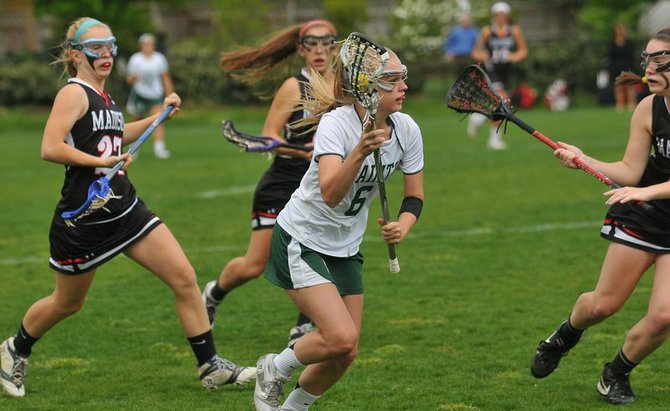 St. Stephen's & St. Agnes' Abby Bailey had one goal and one assist against Madison on Monday. Photo by Louise Krafft. 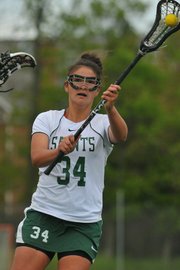 Each team benefited from Monday’s private/public matchup of defending state champions. The Saints, however, did so while pulling out a victory.

St. Stephen’s & St. Agnes, a private school powerhouse in Alexandria, improved to 23-1 with a 13-8 victory on its home field. Madison, a public school program in Vienna, trailed by two after Kierra Sweeney’s goal with 14:42 remaining in the second half cut the SSSA lead to 8-6, but the Saints responded with five consecutive goals and handed the Warhawks (10-1) their first loss of the season.

SSSA scored six of the game’s first seven goals, but Madison closed the first half with a 3-0 run, cutting the Saints’ lead to 6-4 at halftime. During the break, the Saints made it clear they wanted to avoid a letdown similar to what they experienced against Roland Park Country School (Baltimore) on April 26, when they suffered their lone defeat of the season, 12-11.

“A few weeks ago, we played at Rowland Park and it was kind of the same situation,” Saints junior Ellie Majure said. “We walked into halftime kind of with our faces drawn and we were kind of like, ‘We’re up by a few goals,’ and it did not end well for us. [Today], we went into halftime, we were like, ‘This cannot happen again, you need to get pumped up,’ and everybody got their adrenaline going and got real excited.”

St. Stephen’s, the defending VISAA state champion, responded, scoring the first two goals of the second half before pulling away late. Majure led the way with four goals and added an assist. Olivia Mikkelsen, Darby Philbrick and Ellie Carson each scored two goals for the Saints, and Avery Donahoe, Abby Bailey and Sophie Davidson each had one. Donahoe and Philbrick each had two assists.

“I think we played really well and I think it was definitely a learning experience because they are such an elite team, where we can really learn from their motions and their stick skills and the way they play. I’m really proud of the way my team played. I thought we really rose to the challenge and did our best.”

SSSA head coach Kathy Jenkins, who has amassed more than 600 victories in 39 years with the program, praised the Warhawks, who have won two of the last three VHSL state championships.

“I went to the state finals to watch last year and I was really impressed with their stick skills and how fast they move the ball,” Jenkins said. “They’re not [a] typical public school [program, where] one girl tries to run it. They move the ball down the field. As you could see, all those passes, kids were breaking. … I think it’s exciting to see the public schools are getting closer to the private. It was a great game. It’s too bad more people didn’t have an opportunity to see it.” 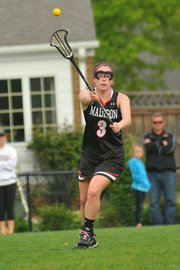 Senior midfielder Alex Condon scored a goal for Madison during the Warhawks’ May 5 contest against St. Stephen’s & St. Agnes.

Madison entered Monday’s contest with a 10-0 record, with nine wins coming by at least eight goals. The Warhawks’ only test came on April 16, when Madison edged Westfield 16-15.

St. Stephen’s & St. Agnes, ranked No. 2 in the nation by laxpower.com, provided Madison with its toughest test to date. The Warhawks stayed close early in the second half, but eventually fell short against their only private-school opponent of the season.

“I am very proud of my team,” Madison head coach Amanda Counts said. “It was a good, hard-fought game. We appreciate the competition. It was fun.”

“I hate to lose,” she said. “I would have really liked to have been the team to beat the Saints. Hopefully there will be other opportunities in the future.”

Madison junior Kierra Sweeney finished with three goals and three assists. Sweeney is committed to Dartmouth, where she would play with Davidson and Carson of St. Stephen’s & St. Agnes.

“I think we were really excited to play because they are an extremely, extremely good team,” Sweeney said. “I think we played really well and I think it was definitely a learning experience because they are such an elite team, where we can really learn from their motions and their stick skills and the way they play. I’m really proud of the way my team played. I thought we really rose to the challenge and did our best.”

Katie Kerrigan, who will play for Ohio State next season, finished with three goals and an assist. Alex Condon and Rachel Brennan each had one goal for the Warhawks.