Serving Up Smorgasbord of Local History 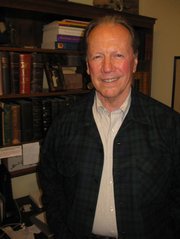 AHS and Civil War Sesquicentennial Commission volunteers at a shared booth at the Arlington County Fair in August 2013. From left are Warren Nelson, Mark Benbow and Annette Benbow. 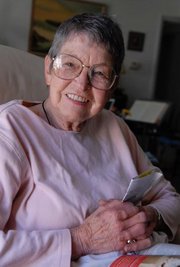 “We’re rebuilding and expanding our programs, and making ourselves more relevant to Arlington County,” said AHS President John P. Richardson, 75, who is retired from the CIA and lives in the Tara-Leeway Heights neighborhood in North Arlington. “We want to make the case persuasively that in Arlington, history is important for politics and it’s good for business.”

For those wishing to explore Arlington history, the AHS offers a treasure trove of monthly lectures, held at 7 p.m. on the second Thursday of the month at the Arlington Central Library. (See sidebar.)

“We offer tremendous programs, on fun, interesting topics,” said Head of Communications Garrett Peck, 46, of Virginia Square. “It’s a chance to learn about our common history and our bonds. It’s a chance for people to participate in the community around them.”

AHS ALSO MAINTAINS the 1891 Hume School, which houses the Arlington Historical Museum at 1805 South Arlington Ridge Road, and The Ball-Sellers House, a 1750’s frontiersman’s cabin at 5620 South Third St., Arlington, in the Glencarlyn neighborhood. That makes AHS the only historical society in the Washington area that is responsible for maintaining and preserving historic properties. Both are open to the public on weekends from 1 to 4 p.m. for tours free of charge. Visit www.arlingtonhistoricalsociety.org or call 703-379-2123.

“It’s a good way to demonstrate to newcomers that Arlingtonians didn’t always live in glass towers and fancy homes — that we have a history of coming up from modest beginnings,” said past AHS President Sara Collins, 84, of Columbia Heights.

“We’re such a modern county that we forget that there’s decades of vital history here,” added Peck.

In terms of expansion, the AHS is initiating the Black Heritage Museum of Arlington, a virtual museum set to open in August that is dedicated to the black experience. AHS will be installing two display cases in the museum for the Black Heritage to tell its story, thus filling a gap in its collection. It will include letters and documents, a history documentary, artifacts like Dr. Charles Drew’s saxophone and eyeglasses — and not just of the slave experience, but of the continuing role of African Americans in Arlington. “The exhibit will be broad, and we hope it will tell a compelling story,” added Richardson.

AHS has also initiated an historical essay contest for 11th graders in Arlington County public schools. Co-sponsored by Arlington Masonic Lodge 285, this year’s prize is $1,000. The essay topic was “To what extent was Arlington County heroic or quixotic in its pursuit of school integration, considering contemporary trends?”

ANOTHER PROJECT in the works is the Arlington Passport Project targeted to middle- and high-schoolers. Ten sites of historic interest will be identified and students will be issued fake passports to be stamped as they visit the sites. It will have an app with descriptions, and will be supported by a GPS and public transportation. “This is a terrific project,” said Richardson, but it needs $5,000 in funding before it can begin. “People are going to learn about Arlington County history — and maybe how to get around by public transportation.”

He added: “We’re showcasing what Arlington has to offer. We have stuff that is worth knowing about, even if it’s not going to make the coffee table picture books.”

Some of the 10 historic sites on the Arlington Passport Project include:

“The home is a jewel,” said Collins. “It became the home of the National Cemetery, Fort Myer and the Marine Base.”

During the Civil War, Collins said Arlington was occupied by Federal Troops, forts and camps, and lost a lot of its historic buildings. “And that caused the devastation of its visual aspects and historic structures,” said Collins. “But we are fortunate to have the Arlington House and the Ball-Sellers House — to keep that history alive,” she added.

Other Arlington Passport Project sites include:

FUTURE PROGRAMS are a workshop on researching a home’s history by expert Matthew Gilmore who will show residents how to determine when the house was built and who owned it.

Another topic is the Confederate attack of July 11-12, 1864, at Fort Stevens with Dr. Frank Cooling. This was the only direct attack on Washington during the Civil War. He will touch on the 68 earthen forts protecting the District, of which 33 were in Northern Virginia, and 20 were in Arlington.

AHS has a budget of $30,000 per year, with 330 members who pay dues ($25/individual and $35/family). A Bell-Ringer Campaign adds about $6,000 a year; and AHS holds an annual banquet in May or June. The Aurora Hills Women’s Club gave AHS $9,000 from its annual Christmas Bazaar, which will support the Hume School.

AHS is starting to reach out to the business community and hopes to be able to raise enough money to create a professional staff in a small office. “We want to get in touch with a far wider band of the business community,” said Richardson. “We are trying to get the idea that history is good for business.”

Richardson is an author who wrote “The West Bank: A Portrait,” (1984), and has a new book, “Alexander Robey Shepherd: The Man Who Built the Nation’s Capital,” which is being published this year.