‘Proud of Our Young People at Woodson’
Votes

‘Proud of Our Young People at Woodson’ 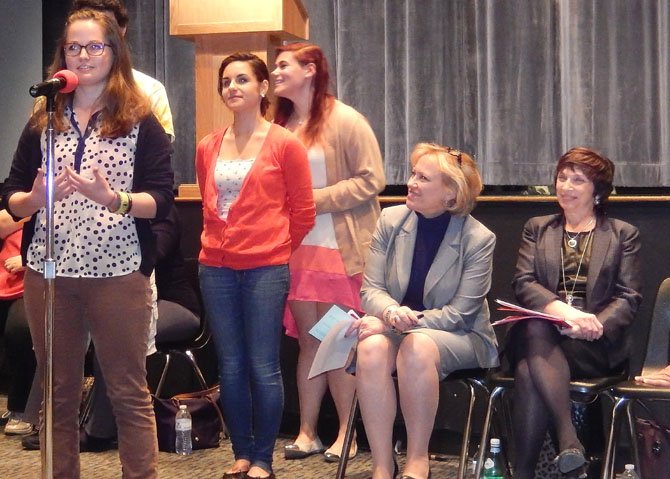 It was standing room only last week in Woodson High’s auditorium when some 1,100 people, mainly parents, gathered for comfort and advice in the aftermath of two student deaths.

"I’m a parent of four children, and there’s nothing more heartbreaking than to hear about the untimely death of a child or learn about anyone who’s suffering," she said. "We support you and want to help you build on the great work that’s been done here."

Tyson thanked Woodson’s teachers for always helping students do their best, and the parents, for attending the March 5 meeting. "If we’re going to overcome and prevent these things in the future, we all have to work together," he said. "[And] it’s important to commend our students for keeping a positive mindset. We’re proud of our young people here at Woodson, and we adults need your help to better learn how to provide for you."

Kim Dockery, assistant superintendent for Special Services and a parent of Woodson grads, said, "The things we’re facing are complex issues; tonight’s the first part of the conversation." Noting Fairfax County’s many resources, Dockery added, "We’re a community that takes care of our most precious asset, our children."

Dr. Gloria Addo-Ayensu, director of the county Health Department, told parents she’s contacted the Virginia Health Department and the Centers for Disease Control "to make sure we’re not missing anything."

"They go to the classes the person [who died] was in," she explained. "They also reach out to students who may have had a loss, themselves, and are particularly vulnerable. If a student is especially distressed, they tell the parents. And at the end of the day, all members of the Crisis Response Team make a list of students we’re concerned about and want to follow up on later to offer additional support."

OFTEN, students or parents will tell the team members about other students they should talk to, and they do. "So there are several layers of active support available," said Panarelli. "We work with groups of kids and tell them there’s a natural process for grief, but it’s different for everybody." "Some kids may have difficulty sleeping, concentrating or being motivated," she continued. "One may be angry, while another is quiet. But they need to be respectful and empathetic of each other’s feelings. As difficult as this time is, your kids are strong and they’ll work through it. Let them know you’re there for them. Avoid generalizing this as part of a pattern; each tragedy is a situation unto itself."

Panarelli also advised parents to "Let your children know it’s OK to laugh and have a good time and not feel guilty. It’s our natural way of dealing, and it’s OK to forget for a minute and go on. Grief comes and goes. Do low-key activities as a family; it’s reassuring and doesn’t demand a lot of energy from them."

If necessary, she said, reach out to a school counselor, school psychologist or social worker. "Depression is a treatable mental illness, not a flaw in a person and not something to be ashamed of," said Panarelli. "Discuss with your children how you’d respond if they told you they’re depressed, involved in substance abuse or having other troubles, so they won’t fear coming to you for help."

"Encourage your child to determine three adults he or she could talk to about things, because sometimes that’s easier," she continued. "Or they can talk to their friends. But you can be proud of your children; they’ve responded [to these tragedies] with resilience, grace and compassion and banded together in groups for comfort. Let them know you’re proud of them."

Fairfax County Prevention Manager Jesse Ellis makes sure everything possible is being done to help students. "Last year, county and school staff identified recommendations regarding suicide prevention and put together a team to look at suicide incidents," he said. "Each is unique, but has lessons we can learn as we move forward."

Ellis said activities strengthening the bonds students have with their communities help prevent suicides. "When we talk about suicide prevention, we’re talking about parents, neighbors, Scout and church leaders, coaches, etc.," he said. "And we need to make sure you have the skills and resources to do that effectively. We want to develop strategies to empower you with the knowledge to do this well."

ON THE BRIGHT SIDE, said Ellis, "We as a community are doing well – our suicide rates are the lowest in the state because our kids have neighbors, teachers and friends to turn to. But we need to do that better. We have great people in the community and, if we build on that, we can make an even bigger difference."

"Until we get parents involved, we won’t solve these problems," added Woodson parent Bob Phillips. "Carol Davis and I formed Community of Solutions. We saw what worked in other communities with similar problems, looked at several organizations and included students to hear their concerns."

Phillips said teens told them their biggest fear is what will happen to them when they do something wrong. "They worry, ‘Will people be angry at me? Will I be ostracized? Will the police come?’" he said. But the Fairfax-Falls Church Community Services Board has trained 40 students, so far, to identify teens with problems and refer them to helpful resources.

"We’re putting together a package so parents can more easily access these resources," he told them. "You’re the solution to help solve this."

"I was struck by the pro-active communication they do when they come into a school," he said. "I was also impressed with Dr. Garza’s leadership; I thought this meeting was approached with humanity to let people know we care."