Local Students Spice it Up
Votes

Local Students Spice it Up 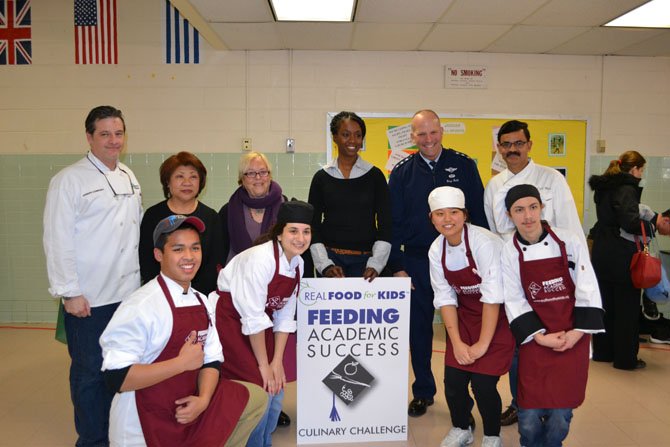 Student chefs from the Fairfax County school culinary program gathered last Thursday afternoon for the second annual Real Food for Kids Culinary Competition. The contest allowed students from the county’s four culinary academies to compete for a chance to have their vegetarian entrées used in the county’s school lunch program.

The culinary students were poised and professional, and the dishes they created were impressive, both in presentation and taste. The four Fairfax County public school culinary academies are offered at Chantilly, Edison, Falls Church and Marshall High Schools.

The culinary academy program was developed by the volunteer grassroots organization, Real Food for Kids. The program, now in its fourth year, advocates for better food for Fairfax County public school students. The group’s efforts have led to less additives and less processed foods for school children, according to Katherine Smith of Real Food for Kids. For example, they were successful in having the 27-ingredient burger removed from the menu.

Students travel from high schools across the county to attend one of the four academies at Chantilly, Edison, Falls Church, or Marshall High Schools. Mariel White is a junior at McLean High School who takes the bus every morning to Marshall High School to participate in the culinary academy. "She really enjoys it and she wants to be a chef," said Mariel’s mother, Carla White. "Before they’re done they have a lot of skills already before they’re off to where they’re going to. She’s learning organizational skills, she’s learning technical skills, and she’s also learning camaraderie. It’s been fabulous."

The academies are the equivalent of two elective class periods each morning. Each of the four programs is taught by a culinary professional, and each program has close to 60 students. It is a two-year program open to juniors and seniors in Fairfax County.

The three or four students per team for the culinary competition were selected either by interest, or by a cook-off. For the competition, each team was required to make a presentation about their dish, the ingredients, nutritional data, and their inspiration to an audience of more than 80 attendees. A panel of volunteer judges moved around the Falls Church High School cafeteria tasting each of the dishes, talking with the students about their techniques, and listening to some of the challenges the teams encountered.

After much deliberation, the judges emerged to present the first place award to the Chantilly High School team for their Lentil Shepherd’s Pie with vegetables. "We liked this idea because it incorporated some things like mashed potatoes, that school-aged kids are familiar with, and lentils, which they might not have tried before," said team member and Robinson senior, Iulian Fortu. "We tested out the recipe several times, tweaked the ingredient amounts, and thought this tasted just right." Apparently the judges agreed.

"I love the program," said Joseph Comfort, Executive Chef for the Lebanese Taverna group, and one of the event judges. "It’s great to get the kids together in head-to-head competition. It’s like the real world. It’s great to see them working within the budget form and the dietary form. I hope the school board is paying attention."