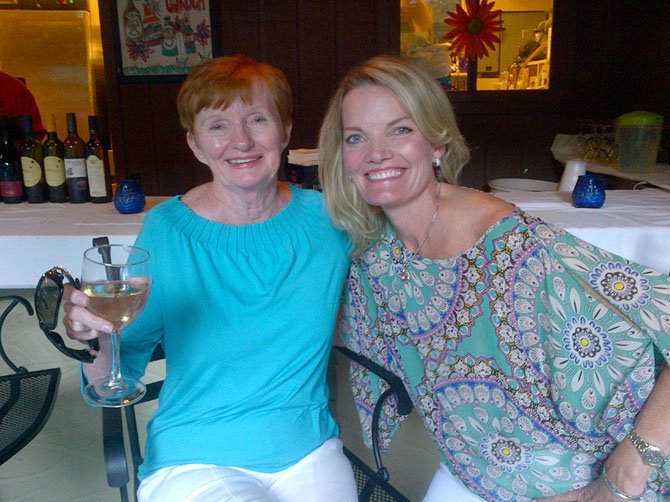 When Sara and Mark Reges’ youngest son Charles was just 9 years old, he was hit by a car in Potomac Village. He suffered a traumatic brain injury and was on life support for weeks at the Children’s National Medical Center. He was in critical care and partially paralyzed for months following the accident — but today he is a normal young man with no side effects.

After the accident and his recovery, Sara Reges who is a nurse, began volunteering at the MedStar National Rehabilitation Hospital (NRH) where Charles was in rehabilitation for many months. Soon, her volunteer position turned into employment in the brain injury area; thus, she began her work with concussion, brain injury and stroke patients. She has been at MedStar NRH since 2011, working closely with both doctors and patients to support the advancement and struggles of recovery.

As the owners of Old Angler’s Inn in Potomac, Sara and Mark Reges have committed to hosting events to raise public awareness and research funds for traumatic brain injuries, concussions and strokes. For the past few years, Sara Reges has served as event chairman for a fashion show luncheon to honor Stroke Awareness Month. 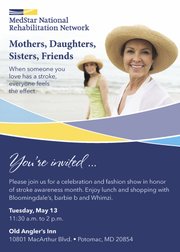 This year, the event will be exceptionally meaningful to Sara Reges because her mother, Sally Kerr, suffered a stroke last September, 2013. She arrived at Medstar NRH, partially paralyzed and unable to speak or walk. Holly Flater, Sara’s sister said, “It was during her recovery at NRH and through the help of a team of dedicated staff that Sally gained her spirit back and could walk and talk again. The family is especially grateful that they were able to have this precious time with their mother before she suffered her final stroke in late October.” Sally Kerr died on Nov. 1, 2013.

“Last year, my mom was here at the luncheon — she never missed any of these events,” said Sara Reges. “It makes me realize how important it is to understand that a stroke can happen to anyone. After she had her first stroke, with the amazing rehab we have at Medstar, she was on the road to full recovery. I was fortunate to have her in the hospital where I work, so I could see her every day. She was a mom to six girls — and we never thought she would have another stroke. We miss her every day.”

Flater recognizes that her mom would have loved attending the event: “Sally is likely smiling down on all of us today as her two of her favorite things in life were fashion and champagne. She would also be so thankful for the generosity of all those attending for giving back to NRH so it can continue to offer the stellar services for others.”

Old Angler’s Inn will host the Spring Fashion Show and Luncheon on Tuesday, May 13, from 11:30 a.m. – 2 p.m. It will be held in memory of Sally Kerr — and to honor and celebrate Stroke Awareness Month. Besides featuring the latest in fashion from Bloomingdale’s and a display of gifts for purchase by barbie b and Whimzi, the event will focus on women’s stroke awareness and will present local women who are currently recovering from strokes as well as Dr. Rachna Malhotra, Attending physiatrist in the stroke recovery program at Medstar NRH. All proceeds from the luncheon as well as a percentage of funds from the shopping event will be donated in support of the MedStar NRH.

One of the women who will discuss her stroke is Allison O'Reilly. When she suffered a stroke in 2010 at age 49, she had no idea what was happening to her. She went from being an active woman with a career as a marketing director of a Fortune 100 company to struggling to regain her life and her independence. She had experienced a brain stem stroke that left her “locked in.” Several months later, she struggled to regain her physical strength and movement but she couldn't speak a word. She was told she would never be the same person again. Allison and her husband Kevin responded with two simple words of determination that they would carry with them throughout her rehab: “Not acceptable.” O’Reilly has written a book, “Out of the Darkness” which chronicles the challenges, the task of relearning everything and the lessons she learned about herself when facing adversity.

“You know what it going on, but you can’t communicate,” said O’Reilly. “You can just blink your eyes. NRH gave me a fighting chance. They are the most wonderful people and I’m so fortunate to have been able to go there.”

Individual tickets for the luncheon and fashion show are available for purchase in advance at MedStarNRH.org/Fashion Show. RSVP by May 6 to latiesha.m.omonijo@medstar.net or call 202-877-1774.