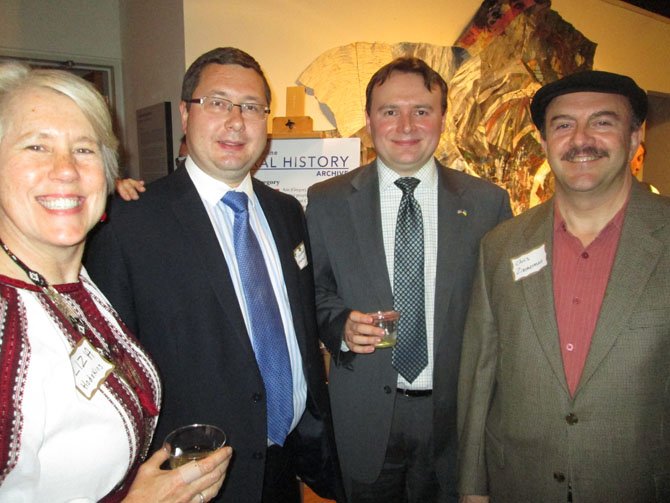 Enjoying the festivities in commemoration of the Arlington Sister City Association's 20th anniversary and the launch of a new oral history project are, from left, Liza Hodskin, aid to the chair of the Arlington County Board; Counselor Stanislav Yezhov from the Embassy of Ukraine; Andrew Tsintsiruk, a representative of Arlington Sister City Association's partnership with Ivano-Frankivsk, Ukraine, and former County Board member Chris Zimmerman. Photo by Amber Healy.

People filled the Arlington Arts Center Monday evening, May 5, to mark the Arlington Sister City Association's 20th anniversary of its first partnership, with Aachen, Germany. But that wasn't the only reason for the party: ASCA also used the occasion to publicly launch an oral history project, tracing the history of the organization and its possible role for the future of Arlington and the five international communities it has befriended: Aachen; Coyoacan, Mexico; Reims, France; San Miguel, El Salvador; and Ivano-Frankivsk, Ukraine.