Two scouts — Brian A. Huang and Aaron M. Hwang — from Troop 773, which meets at the Potomac United Methodist Church, recently obtained the rank of Eagle Scout and were honored at a ceremonial Court of Honor. They are Troop 773's 156 and 157th Eagle Scouts, respectively.

Brian is a senior at Montgomery Blair High School. For his Eagle project, he led a team of volunteers in constructing eight raised garden beds at Button Farm Living History Center in Germantown. Button Farm depicts 19th Century slave plantation life and the heroic story of the Underground Railroad. The garden beds that Brian and his volunteers constructed have improved growing conditions for the farms. Brian will be attending MIT in the fall. 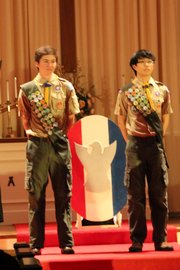 Aaron is a senior at Richard Montgomery High School who organized a 45-minute musical performance with 11 songs for Ring House, a senior independent living community. Aaron organized and led 43 performers, accompanists, photographers, and other volunteers in this production. He will attend Yale University in the fall.