Hannah Barnaby discusses her new young adult novel “The Wonder Show” on May 17.

Many young children and teens dream of running away. Hannah Barnaby’s new young adult novel, “Wonder Show,” follows a young girl named Portia Remini as she runs away from her children’s home and joins the Mosco’s Traveling Wonder Show in an effort to find her father.

On May 17, she will discuss the “Wonder Show” and the carnival and circus acts that were her inspiration during an author talk at Potomac Public Library at 1:30 p.m.

While working as a children’s book editor for Houghton Mifflin Publishing in Boston, she was chosen for the Children’s Writer-in-Residence program sponsored by the Boston Public Library’s in 2004. The grant required her to use material from the library’s special collection.

“As I started looking around, I found that they had a lot of material on circus history. And I’ve always been interested in circuses and carnivals,” she said.

The Boston Public Library’s grant enabled her to transition from being an editor to an author.

The “Wonder Show” is a historical novel set during the Depression in 1931, a time when many smaller circuses were facing financial decline. 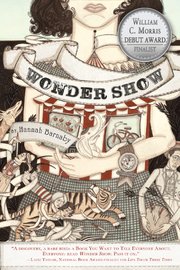 “The main character, Portia, is struggling but so is everyone else in the novel,” she said.

As with many historical novels, Barnaby said she learned much more about circuses than she could ever include in the novel. She became familiar with a lot of the older carnivals and circus performers.

One of her favorite sideshow performers were the Hilton sisters — Daisy and Violet — who were “very strong willed” conjoined twins who performed on the vaudeville and carnival circuit.

“We often think about Paris and Nicky Hilton when we hear the Hilton sisters, but these were the first Hilton sisters. They were one of the earliest performers who took their manager to court and sued for their independence. In a sense, they had to look out for each other because they had no choice,” she said.

Barnaby was so inspired by the Hilton sisters that she based the conjoined twins in her novel on them.

Besides the sideshow performers, the novel also includes some of the carnival language she came across in her research.

“Wonder Show” includes a theme common to many young adult novels: identity. Some other themes include being in the minority or the majority and finding out what is normal depending on the circumstances.

“When the main character joins up with the circus, she finds herself in a situation where she is in the minority because she is the only ‘normal’ character or person there,” she said.

During the eight years it took to complete the “Wonder Show,” Barnaby went through a number of life-changing events. 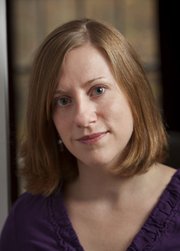 “While I was writing the novel, I got married, had kids and relocated twice. Because the writing of this book spans many different parts of my life, my point of view changed a lot when I was writing it,” she said.

Her advice for first time or young authors is to understand that even great writers get rejected.

“If you give up the first time you get a rejection letter then you’ll never get anywhere. You just have to keep going,” she said.

In addition, she also advises novice writers to “get as many books into your brain as you can when you are young because then you’ll have a lot to draw from when you sit down to write.”

Her favorite authors include M.T. Anderson’s “Feed,” Julie Berry’s “All the Truth That’s In Me,” Sandra Cisneros’ “The House on Mango Street,” Meg Medina’s “Yaqui Delgado Wants to Kick Your Ass” and Evan Roskos’ “Dr. Bird’s Advice for Sad Poets.”

“Even though some of these names may be unfamiliar to your readers, they are all creative writers that I admire a lot,” she said.

Her second novel is currently under consideration for a contract with her publisher.

Later this summer, Barnaby will showcase her new novel at the Girls for Summer 4th Annual Summer Reading Party at the Richmond Public Library on June 18 at 7 p.m.

The native New Yorker moved to Charlottesville two years ago from Connecticut. Barnaby has a masters in children’s literature from Simmons College in Boston and a M.S.A. in writing from Vermont College.

The “Wonder Show” is available online through Amazon.com and at Barnes and Noble. Individuals can also check their local bookstores for the novel as well.