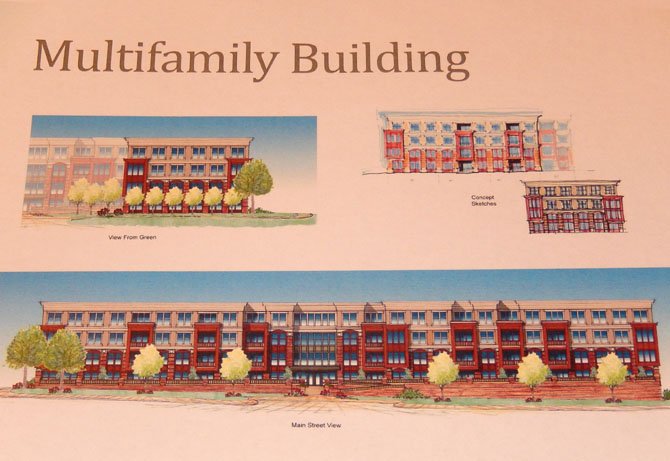 When Oak Knolls Realty Corp. acquired the Oak Knolls Apartments a year ago, more than 30 of the units weren’t habitable.

“There was water damage and they hadn’t been maintained property,” said land-use attorney Lynne Strobel, representing the new owner. “Now they’ve undergone extensive renovations and 100 percent of the units are habitable.”

Appearing recently before the Fairfax City Council, she presented details of the proposed plan to completely transform the 6-acre site along Main and Oak streets in Fairfax. Built in the early 1960s, there are currently 110 units in five buildings.

But the new owner wants to redevelop the property with a mix of townhouses and multifamily homes. “My client wanted to think outside the box and do something different,” said Strobel. So proposed now are 151 apartments and 63 townhouses.

THE APARTMENTS would be three-story walk-ups with a mix of 190, one-car garages plus 66 surface parking spaces. The building, itself, would be four stories served by elevators. It would be oriented toward Main Street and would have its parking tucked underneath the apartments.

Entrance to the site would be from both Main and Oak streets, but townhouse residents would only enter from Oak, the side street. The townhouses would also come with terraces. The apartments would be for rental, but Strobel said the townhouses would create “opportunities for home ownership and a diversity of housing within the City.”

There’d be a drop-off area in front of the building, plus an exercise room and business center within the multifamily building. And a small clubhouse and pool would be shared by both the apartment and townhouse residents.

“We’ll preserve the Oak trees on Oak Street and will have some green, open space,” said Strobel. “And a see-through lobby going through the building creates a nice presence on Main Street and encourages walkability.”

“With the apartment building facing Main Street, we stepped back the entry and have a curved, overhanging marquee over the entrance,” said Sandy Fennell, senior designer with the architects, Devereaux & Associates. She also noted bay windows and recessed decks by the roofline, plus panels between windows for an urban look.

The building exterior will be a combination of brick and other materials. Fennell said the townhouses will also feature “crisp detailing, strong cornice lines and vertical brick columns.” However, the building design and layout are still in their preliminary stages and haven’t yet been finalized.

The 16-foot townhouses are expected to be in the $400,000 price range, with the 22-foot townhomes under $700,000. Strobel said the project would also contain some affordable housing, and she said the owner plans to meet with the community “because we want this to be a collaborative process.”

“Devereaux & Associates has an outstanding history of work in this City,” added Stephen Bannister, president of Oak Knolls Realty Corp. “We think it’s a unique opportunity to bring some homes for sale to the City at multiple price points in a classy community.”

FAIRFAX MAYOR Scott Silverthorne complimented him for “moving so quickly and decisively” to renovate this property.

Councilman Dan Drummond asked if any of the townhomes would be “FHA-eligible for purchase so people with modest incomes can buy them,” and Strobel said they would.

Councilman Michael DeMarco asked what the mix of bedrooms would be, and Fennell said probably 60-70 percent of the units would be one-bedroom and 30-40 percent, two-bedroom. None would have three bedrooms. Councilman David Meyer asked where the terraces would face, and Fennell said they’d “tend to face the common green inside the multifamily area.”

She also noted that City staff wants more details about things such as the building materials and traffic circulation. Silverthorne advised her to work with them “to hammer out these details,” adding that the City Council is “excited about the renovation, provided these things are attended to.”