2014 Athletes of the Year
Votes

George Mason Men's Basketball head coach Paul Hewitt will be on hand as 27 of the city's best high school athletes are honored for their academic and athletic excellence at the 58th annual Alexandria Sportsman's Club Awards dinner May 29 at the Westin Carlyle Hotel.

Now in his third year at GMU, Hewitt previously spent 11 years as head coach at Georgia Tech where he guided the Yellow Jackets to the NCAA in his first season in 2001. Three years later, he took his team to within one win of a national championship, losing to the University of Connecticut in the NCAA finals in 2004.

Also being honored at the event will be Saint Stephen's and Saint Agnes School field hockey coach Marsha Way as Coach of the Year. With more than 500 wins in her 35-year career, Way has amassed 21 ISL season championships, 20 ISL tournament championships and four VISAA state championships, with 12 undefeated seasons.

Among the students being honored will be Noah Lyles, a 16-year-old sophomore at T.C. Williams High School. Lyles was named an Athlete of the Week last month by USA Track and Field and is in a promising position to earn a spot on the America’s Team for the Youth Olympic Games in Nanjing, China, in August.

“It's important to honor these athletes during their high school years, not only for their performance on the field but in the classroom as well,” said ASC president Frank Fannon. “Our yearly awards dinner is an Alexandria tradition that showcases the best and brightest of the young athletes in our community.”

Founded in 1947, the Alexandria Sportsman's Club is a nonprofit organization dedicated to recognizing local high school athletes for excellence in sports and proficiency in the classroom. In addition to the Athlete of the Year honorees, a Sportsman of the Year award will be announced at the dinner.

Tickets for the ASC Athletes of the Year awards dinner are available online at www.alexandriavasports.org. Cost is $65 for ASC members and $75 for non-members. Cocktail reception begins at 6 p.m. with dinner at 7 p.m. at the Westin Hotel, 400 Courthouse Square. For more information email alexandriasportsmansclub@gmail.com. 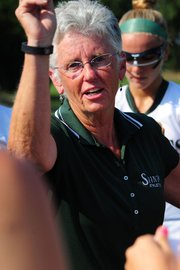